Accessibility links
Japan Suspends Annual Whale Hunt : The Two-Way Japan harpoons whales under a provision that allows it for scientific research. But an American environmental group has been chasing Japan's ships to keep them from hunting. 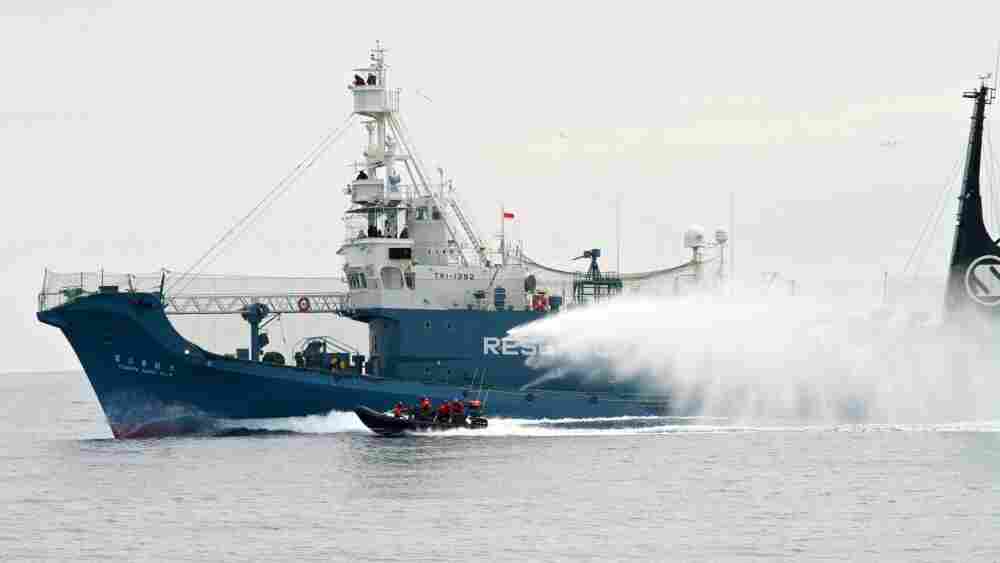 The crew of the whaling vessel Yushin Maru #3 uses their water cannons against Sea Shepherd's Delta team (foreground) in a Zodiac boat during clashes in the Southern Ocean. The photo was taken on Jan. 1 by the Sea Shepherd Conservation Society. Gary Stokes/AFP/Getty Images hide caption 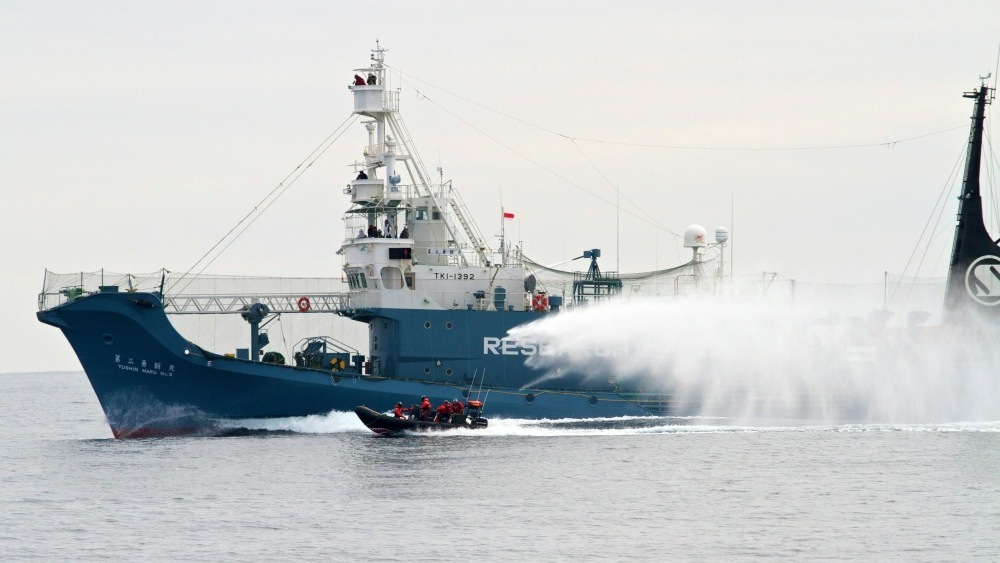 The crew of the whaling vessel Yushin Maru #3 uses their water cannons against Sea Shepherd's Delta team (foreground) in a Zodiac boat during clashes in the Southern Ocean. The photo was taken on Jan. 1 by the Sea Shepherd Conservation Society.

Japanese officials said the country was halting its annual whaling expedition because of safety concerns. Commercial whaling has been banned since 1986, but every year, Japan harpoons whales using a part of the regulation that allows killing whales for scientific research.

The announcement comes after weeks of conflict with an American environmental group called Sea Shepherd. The group has been following Japan's Nisshin Maru and blocking its main ramp, which prevents the Japanese from loading any whales.

Japan says it suspended its hunt on 10 February. It is unclear whether the expedition, which would usually end mid-March, will be called off permanently.

"Putting safety as a priority, the fleet has halted scientific whaling for now. We are currently considering what to do hereafter," Tatsuya Nakaoku, an official at the fisheries agency, told Reuters news agency.

But he said nothing had been decided yet.

The AFP spoke to Sea Shepherd's captain Paul Watson, who reported that the Japanese ship was sailing in waters far from the hunting area:

"If that's true then it demonstrates that our tactics, our strategies have been successful," Watson said from his ship, the Steve Irwin.

"I don't think they've gotten more than 30 whales... certainly they haven't got many whales at all."

Sea Shepherd have harassed whalers in recent years, moving their ships and inflatable boats between the harpoon vessels and the sea mammals, and throwing stink and paint bombs at the whaling ships.

This year, reports the AFP, Sea Shepherd has deployed a speedboat called "Gojira" to chase after harpooners. That speedboat replaced a vessel that was destroyed last year during similar clashes. The Sydney Morning Herald reports on Sea Shepherd's other tactics:

Now half-way through its season, the whaling fleet has been under sustained siege from Sea Shepherd activists this year.

They occupied two of its three harpoon ships for weeks, delayed a refuelling operation, and, according to the [Institute of Cetacean Research], fouled the propellors of one of the harpoon ship Yushin Maru No.3.

This ship was accompanying the Nisshin Maru, but dropped away yesterday, apparently unable to keep up, Sea Shepherd said.

The Financial Times reports that while Japan hunts the whales under the scientific research provision, a lot of the whale meat ends up on the market, because the treaty also requires that "resources from research not be wasted."