Accessibility links
Wisconsin Is First Of Many Flash Points As GOP Governors Push For Change : The Two-Way They came into office pledging to cut spending and as they try to reduce the power of public employee unions the political battles are heating up. 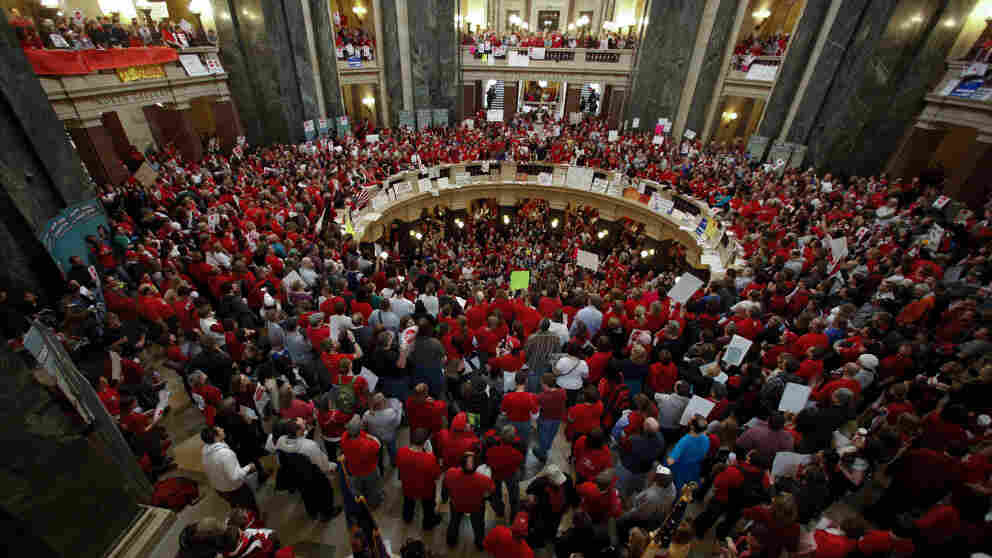 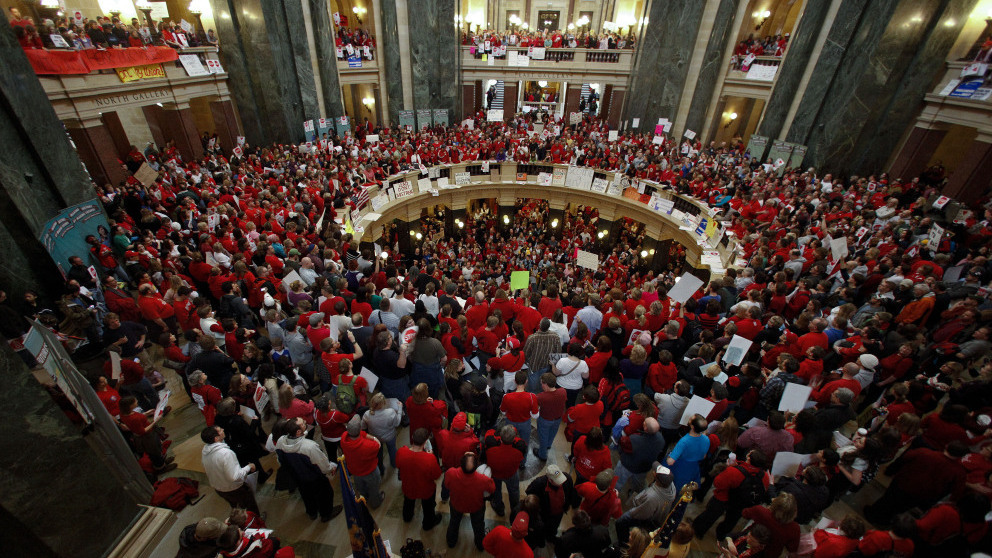 Protesters filled the Wisconsin Capitol in Madison on Thursday.

While much of the buzz about the standoff in Madison, Wis., over Republican Gov. Scott Walker's budget-cutting plans has been about large protests by unions and the disappearance of Democratic state senators, there's a broader point to make.

As the Associated Press writes:

"Republicans who swept into power in state capitols this year with promises to cut spending and bolster the business climate now are beginning to usher in a new era of labor relations that could result in the largest reduction of power in decades for public employee unions. But as massive public protests and legislative boycotts in Wisconsin this week have shown, the Republican charge can be fraught with risk and unpredictable turns as politicians try to transform campaign ideas into action."

And, the AP adds, "labor plans to spend large amounts of money on battles in Florida, Indiana, Michigan, Minnesota, New Jersey, Ohio, Missouri, New Hampshire, Maine, Pennsylvania and Wisconsin. Unions see their goal as not just playing defense — as opponents chip away at bargaining rights — but going on offense to try to educate the public about the role of unions."

So watch for more stories in coming weeks and months from state capitols around the nation.

As for the news from Madison, our friends at Wisconsin Public Radio are following it here. There's also extensive coverage on the Milwaukee Journal Sentinel's All Politics blog, which says that many schools in the state (including in Milwaukee) are closed again today because so many teachers have called in sick "to attend protests in Madison."

The University of Wisconsin's student-run Badger Herald produced this video, which shows some of the action during yesterday's rallies in Madison:

Update at 2 p.m. ET. Democrats May Stay Away For A While:

"Democrats who fled Wisconsin to block a vote on a sweeping anti-union bill could stay in hiding for days or even weeks. Democratic state Sen. Jon Erpenbach spoke to The Associated Press at a Chicago hotel on Friday. He and fellow Democratic senators left Wisconsin on Thursday to delay the near-certain passage of a bill backed by Republicans and GOP Gov. Scott Walker." (The Associated Press)

Update at 11:10 a.m. ET: Republicans in the state Senate have asked the governor to have state troopers deliver a message to Democratic leader Mark Miller, asking him to bring his fellow Democrats back to Madison for a vote, the AP says.