Accessibility links
Flashback: Reagan Calls Gadhafi The 'Mad Dog Of The Middle East' : The Two-Way The Libyan leader's speech today has renewed speculation about whether he's sane. What do you think? 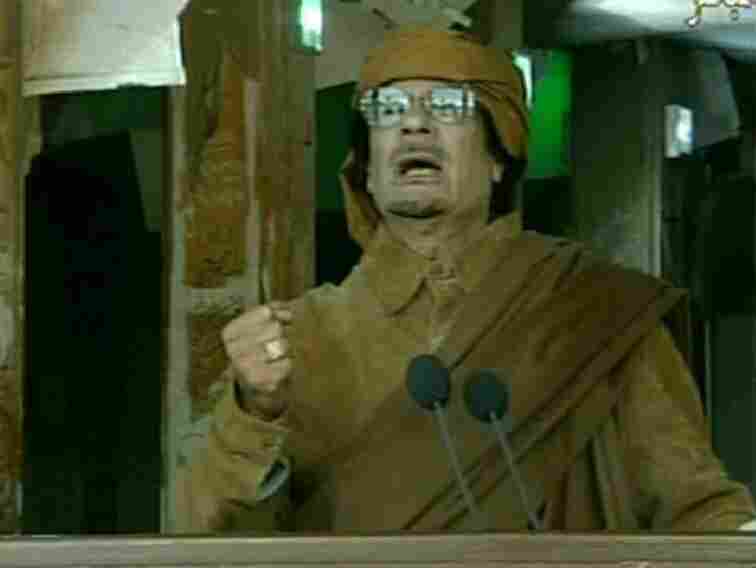 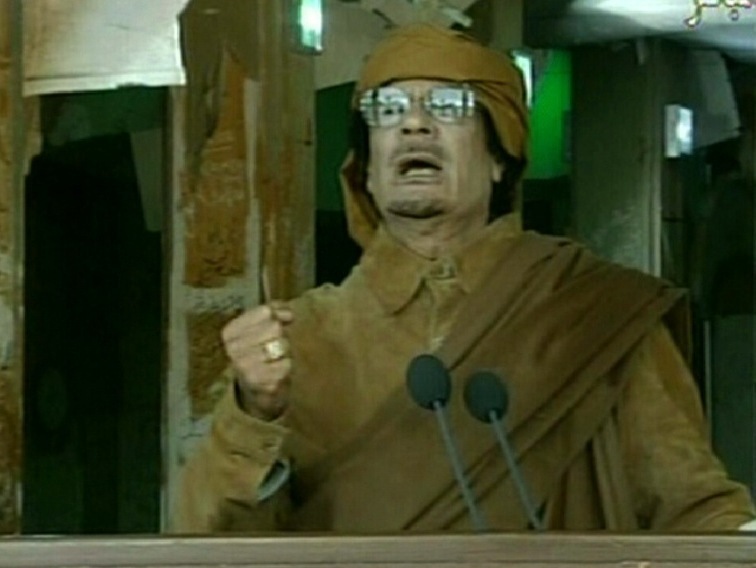 Libyan leader Moammar Gadhafi appeared on state TV as he delivered a nationwide address in Tripoli.

Libyan leader Moammar Gadhafi's hour-long address to his nation today, during which at times he seemed to ramble while at other moments he "thundered, pounding his fist on the podium," has renewed speculation about his sanity.

As Washington Post columnist David Ignatius writes, watching Gadhafi's "televised rant today — in which he threatened, in effect, to turn himself into a suicide bomb and take his country down with him — a reasonable person would conclude that the Libyan leader is a dangerous nut."

This is by no means the first (and probably won't be the last) time Gadhafi's grasp of reality has been questioned. His speech today and the reactions to it reminded us of a comment that President Ronald Reagan made during a news conference in April 1986, shortly after a bombing at a Berlin disco that killed two American servicemen. The U.S. would strike back soon after — missiles fired at one of Gadhafi's homes killed his adopted baby daughter.

The day of the news conference, April 9, was four days after the disco bombing and six days before the strike on Gadhafi's compound. Here's what Reagan had to say about the Libyan dictator:

"We know that this mad dog of the Middle East has a goal of a world revolution, Muslim fundamentalist revolution, which is targeted on many of his own Arab compatriots."

Now, we're not psychiatrists. Maybe Gadhafi is one of those "crazy like a fox" kind of leaders. Or maybe he's, as Reagan said, a "mad dog."

And this isn't a scientific survey designed to accurately gauge public opinion.

It is, though, a question that's apparently on a lot of minds: