Accessibility links
Hearing On 'Muslim Radicalization' Misses Greater Threats, Congressman Says : The Two-Way Rep. Andre Carson (D-IN), one of two Muslim members of Congress, says there are "Islamic bozos" who want to harm Americans. But racial supremacists and others are responsible for more attacks, he says.

In the days leading up to Thursday's hearing before the House Homeland Security Committee on what Chairman Peter King (R-NY) warns is the threat from a radicalization of Muslims in the U.S., Tell Me More is having conversations with people on all sides of the debate over whether the hearing will be illuminating or inflammatory.

The show has invited King to be on the air and has scheduled conversations with Muslims who support his decision to hold the hearing. We'll keep an eye out for news from those discussions. 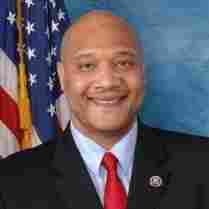 Today, TMM host Michel Martin spoke with Rep. Andre Carson (D-IN), who is one of two Muslim members of Congress (the other, Democratic Rep. Keith Ellison of Minnesota, will testify at the hearing; Carson says he was not invited to do so). Carson thinks King is focusing too much on Muslims and ignoring the threats posed by racial supremacists, environmental extremists and others.

"Are there Islamic bozos out there who really want to see harm done to Americans? Absolutely," Carson told Michel. "And we have to act and isolate the threat and deal with the threat effectively.

"However, there are other groups, particularly racial supremacist groups, who pose a greater threat to our internal security."

Carson, his official biography says, is a former investigative officer in the Indiana State Excise Police and worked in the anti-terrorism unit of the Indiana Department of Homeland Security. Here's part of his conversation with Michel:

Click here to find an NPR station that broadcasts or streams the show.