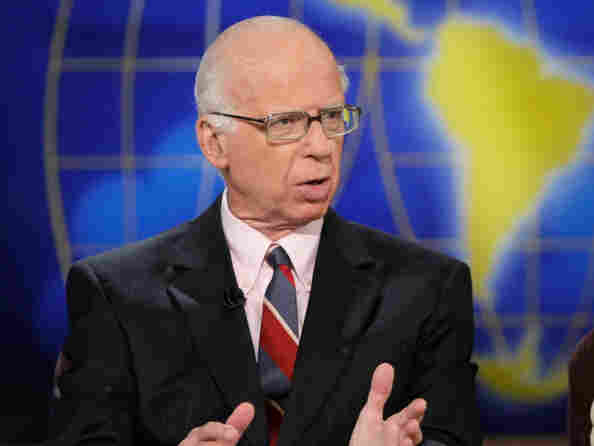 Washington Post columnist David Broder speaks during a taping of "Meet the Press" at the NBC studios August 10, 2008 in Washington, DC. Alex Wong/Getty Images for Meet the Press hide caption 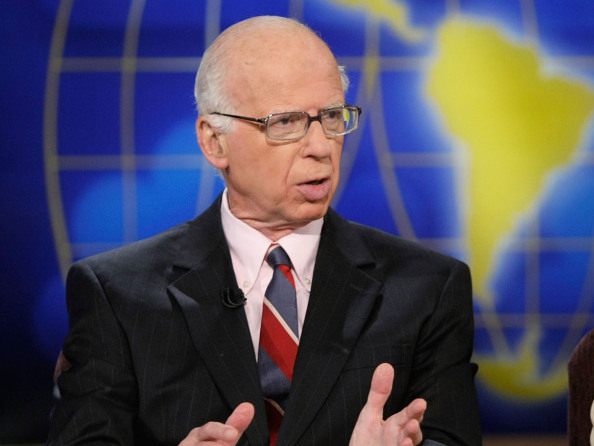 Washington Post columnist David Broder speaks during a taping of "Meet the Press" at the NBC studios August 10, 2008 in Washington, DC.

Columnist David Broder, who was a fixture on Washington's political landscape, has died, according to The Washington Post. He was a frequent guest on NPR, where he was called on for his insights into elections and the political process.

Broder was famous for relying on old-fashioned legwork to gauge the political pulse of voters. He organized teams of people who went out and knocked on doors in swing states to ask voters which issues they cared about the most.

He also had a hand in breaking a news story that reshaped political reporting in the last decades of 20th century.

In 1973, Mr. Broder and The Post each won Pulitzers for coverage of the Watergate scandal that led to President Richard M. Nixon's resignation. Mr. Broder's citation was for explaining the importance of the Watergate fallout in a clear but compelling way.

Broder, who was 81, had been suffering from complications associated with diabetes, the Post says.

We'll have more updates on David Broder and his legacy in journalism later today and tomorrow morning.

You can sort through an archive of Broder's syndicated columns here.

The White House has released a statement from President Obama on Broder's passing. Here it is:

Like so many here in Washington and across the country, Michelle and I were deeply saddened to hear about the passing of a true giant of journalism, David Broder. David filed his first story from our nation's capital before starting as a junior political writer on the 1960 presidential election.

In the decades that followed, he built a well-deserved reputation as the most respected and incisive political commentator of his generation – winning a Pulitzer Prize for his coverage of Watergate and earning the affectionate title of Dean of the Washington press corps. Through all his success, David remained an eminently kind and gracious person, and someone we will dearly miss. Our thoughts and prayers are with his family and friends in this difficult time.

Thomas Edsall, a former colleague of Broder's at the Post, spoke with Jennifer Ludden for a Newscast report, saying Broder was well-known for keeping an exhaustive list of contacts:

"The degree to which he was on top of everything that went on was just extraordinary," Edsall said."Working with him was intimidating in a sense, in that he knew often more about what I or other reporters were reporting on."

Edsall says Broder doggedly traveled to key political districts to discover what voters thought. He says Broder lamented the rise of political consultancies, and the disappearance of moderates. He's survived by a wife and four sons.

As Ludden reports, Broder "was so relentlessly even-handed, media watchdogs couldn't peg him as left or right."

Speaking to The Washingtonian about his views of political journalism, Broder said:

Given the American people's deep skepticism about our political system today," he added, "we can raise their faith some if we give them the feeling that, at least at election time, the press and candidates are responding to their thoughts and views.

And here's a 2009 story about DC celebrities with diabetes from The Washingtonian, which describes how Broder's dedication to covering the Iowa caucuses in 2000 nearly forced doctors to amputate his feet — a sadly common outcome for many diabetics.