Accessibility links
Wisconsin GOP Bypasses Democrats On Collective Bargaining : The Two-Way In a sudden move, Republican senators stripped all of the financial proposals from the bill but kept the language ending many collective bargaining rights for nearly all public sector unions. The bill now heads to the state Assembly, which is expected to pass it. 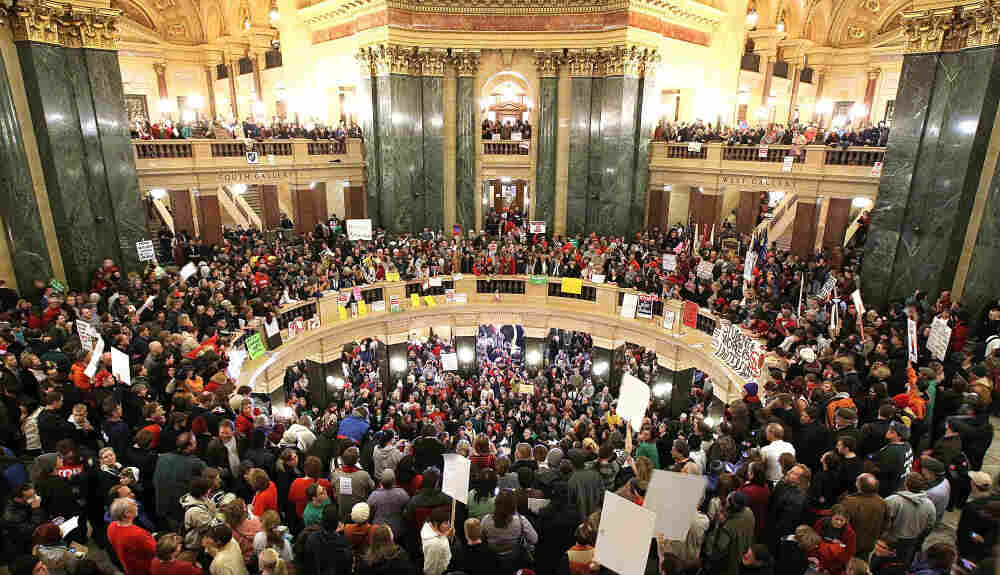 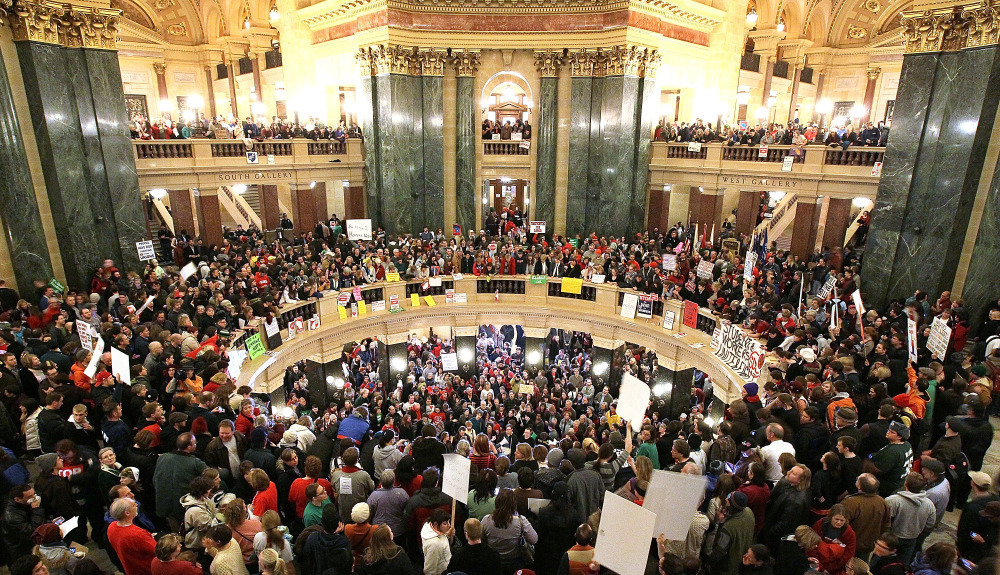 Thousands of protesters swarm the Capitol in Madison, Wis., on Wednesday after Republican senators voted to curb collective bargaining rights for some public union workers.

Republican state senators in Wisconsin figured out how to pass controversial budget repair legislation without the help of missing Senate Democrats. In a sudden move Wednesday evening, GOP senators stripped all of the financial proposals from the bill but kept the language ending many collective bargaining rights for nearly all public sector unions.

It's no longer a budget repair bill.

Wisconsin law requires that 20 senators be present to vote on any finance bills. By leaving the state last month, the Democrats used a procedural tactic to block their Republican colleagues from reaching a quorum of senators. Republicans responded in kind. By using a procedural tactic and dropping the legal need for a quorum, they kept the language that Democrats hate the most: provisions that shave many collective bargaining rights from public unions. The Milwaukee Journal Sentinel has more.

Shawn Johnson of Wisconsin Public Radio tells Morning Edition that Wisconsin senate Democrats were simply "outmaneuvered." Late yesterday afternoon, Republican senators created a special committee to take up the amended bill. Committee members met for two hours, approved it and forwarded it to the state Senate. It was passed 18-1 in a matter of minutes.

There was no debate — and no Democrats were in the room.

Bedlam erupted. The Wisconsin State Journal reports that, as word flew of the legislative action, thousands of people stormed the Capitol in Madison, crawling through windows and forcing their way through doors to get inside to protest.

It's not over yet. Now called the collective bargaining rights bill, it goes to the Wisconsin State Assembly today and is expected to pass. Then it would go to Gov. Scott Walker, who has been demanding these changes from the start of the legislative stalemate.