Accessibility links
As Pro-Gadhafi Forces Attack The East, Tripoli Sees Celebration : The Two-Way Two distinct scenes have developed in Libya: In the capital, government supporters are celebrating and in the east air attacks continue. 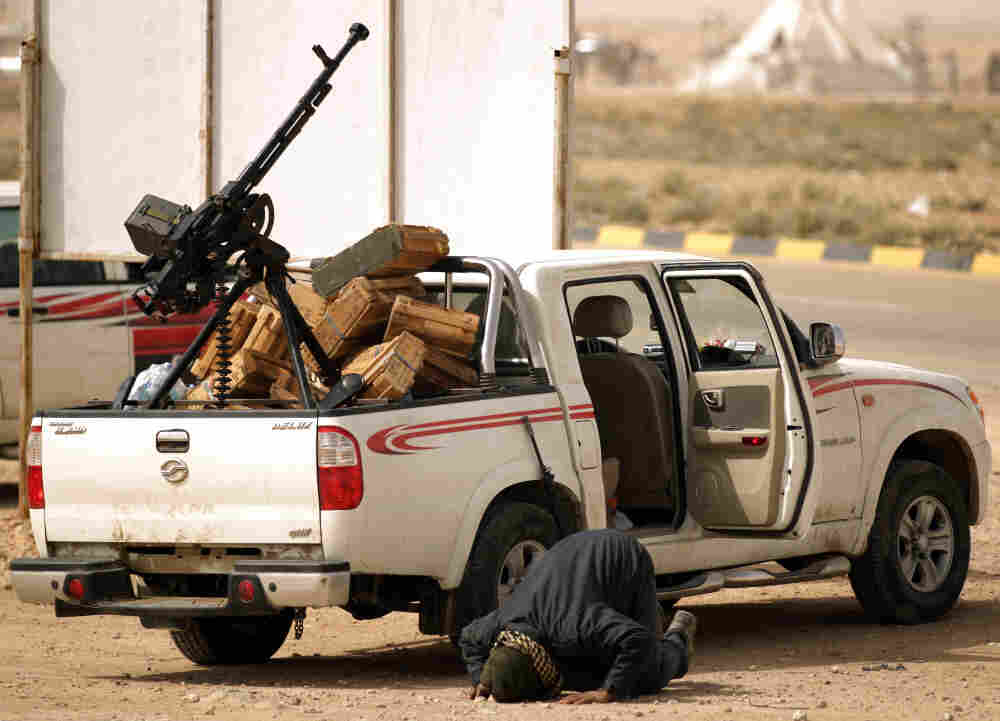 A Libyan rebel prays next to a pick-up truck loaded with a machinegun in Ajdabiya, a key town which the rebels have vowed to defend at all costs from forces loyal to Libyan leader Moamer Gadhafi. Patrick Baz/AFP/Getty Images hide caption 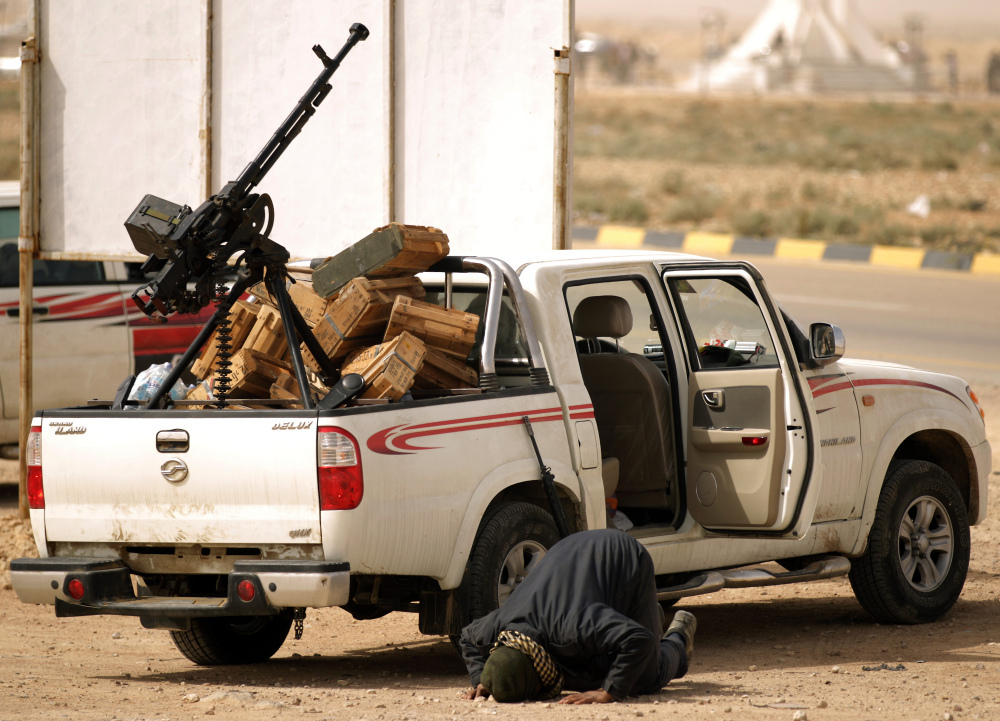 A Libyan rebel prays next to a pick-up truck loaded with a machinegun in Ajdabiya, a key town which the rebels have vowed to defend at all costs from forces loyal to Libyan leader Moamer Gadhafi.

From Tripoli, NPR's David Greene spoke to Robert Siegel for this afternoon's All Things Considered. David said he found something rather surprising on the streets of the Libyan capital: a celebration.

David spoke to one man, who was a Gadhafi supporter. Here's a bit of audio from their exchange; note that we'll add David's whole piece later:

David said his movements have been heavily controlled by the government. In fact, he says, on two occasions, Libyan officials showed him Libyan state news and emphasized that the uprising was being led by Al-Qaida. David says that every once in a while he'll hear a PA announcement at his hotel calling on all journalists to get on the bus, because there's a story they want them to cover.

David told Robert that it's been hard to get a real handle on what the mood is really like in the capital city.

Elsewhere in Libya, however, the violence has continued. The New York Times reports that Pro-Gadhafi forces launched fresh air attacks on Benghazi, which has become a home base for rebels. The government also offered amnesty to rebels who gave up their weapons.

The paper talks to a resident of Zawarah, which has been overtaken by the Gadhafi regime:

"We know what happened in Zawiyah, and we think that the same thing is going to happen here soon," one resident said, speaking anonymously to protect himself and his family from retribution. "They say that if you take down the flag, we will let you live," he added. "Maybe we will fight, but we will have a lot of casualties."

All of this is happening as the international community weighs its options. British Prime Minister David Cameron issued his strongest statements yet. Speaking to the British House of Commons, this afternoon, he said he wanted Britain to be involved in military action in Libya.

He said that setting up a no-fly zone was "perfectly practical and deliverable" and that action would have to take place soon. "Time could be relatively short," he said.

"To those who say it is nothing to do with us, I would simply respond: Do we want a situation where a failed pariah state festers on Europe's southern border, potentially threatening our security, pushing people across the Mediterranean and creating a more dangerous and uncertain world for Britain and for all our allies as well as for the people of Libya?"

As far as we are concerned there are some fundamental questions that need to be answered," Churkin told reporters as he left the Security Council talks.

"We have not had enough information. To say 'we need to act quickly,' 'as fast as possible' but not to provide the fundamental answers to those fundamental questions, to us is not really helping. It is just beating the air."

The French ambassador said the no-fly zone was still on the table and a decision could come later this week.

Update at 6:08 p.m. ET: As Korva reported earlier, the Group of Eight leading economies was also meeting in Paris tonight.

Quoting Italy's foreign minister, the AP reports that the group came to no agreement about a no-fly zone over Libya. Franco Frattini told reporters that France and Britain favor a no-fly zone but Russia and Germany are "reluctant to approve" one.

Secretary of State Hilary Clinton was also there for the two-day meeting.

Update at 7:26 p.m. ET: NPR's David Welna reports that the Senate passed a non-binding resolution calling for the U.S. to recognize the provisional revolutionary government in Eastern Libya and establishing a no-fly zone over the country.

The Hill reports that Sen. John McCain (R-Ariz.), one of the resolution's sponsors, gave an impassioned speech in favor of it:

"It is long past time for the president to answer ... calls for international leadership," McCain said in comments on the Senate floor. He noted the Arab League, Gulf Cooperation Council, France and the U.K. have endorsed seizing control of Libyan skies.

"A no-fly zone was never going to be the decisive action that tipped the balance against [Libyan President Moammar Gadhafi], even when Senator Lieberman and I called for it nearly three weeks ago," McCain said. "But it remains the case that a no-fly zone would take one of Gadhafi's most lethal tools off the table, and thereby boost the confidence of Libya's opposition."