Accessibility links
Look! On The Web! The 'Comic Book Nerd Lawyers!' : The Two-Way The creators of the blog Law and the Multiverse explore the legal issues of the superhero set. They say their dip into the world of fantasy can offer some real-world lessons. 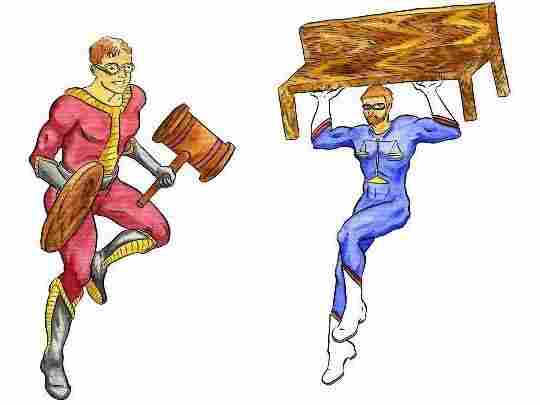 toggle caption
Jen Vaughn for Law and the Multiverse 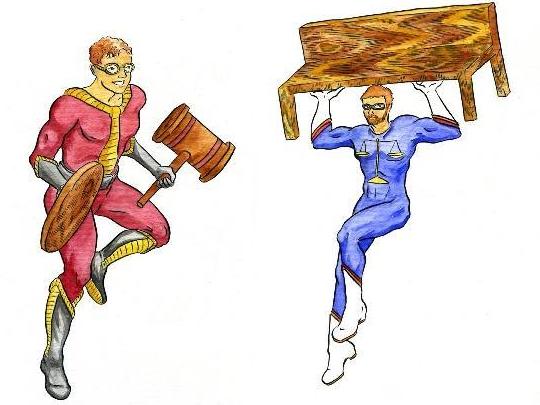 Jen Vaughn for Law and the Multiverse

If you've ever wondered whether Robin — Batman's sidekick, that is — was the victim of child endangerment (maybe) or thought that some superheroes (especially mutants) might be discriminated, there's a blog for you.

And even if superheroes aren't your thing, it still could be both fun and educational.

It's Law and the Multiverse, and on All Things Considered today self-described "comic book nerd lawyers" James Daily and Ryan Davidson explain to host Melissa Block why they've decided to explore "the hypothetical legal ramifications of comic book tropes, characters, and powers."

It began, Daily says, with a dinner conversation about "whether privacy rights would have to be different on Krypton if other people had x-ray vision." A friend said he should blog about that and things took off from there.

As The New York Times wrote in December, the blog's posts can be "dry, technical and funny in their earnestness." And as you might imagine since superheroes do tend to cause a lot of damage when they work, Daily and Davidson have posted a lot about torts — from whether a superhero could be legally liable for deflecting a bullet that then injures a bystander (no) to whether a superhero can be held liable for not responding to someone in need (probably not).

But is there any practical side to this? Yes, says Daily. The blog lets them "educate people about the law." And, adds Davidson, they can use "rich, detailed stories" when doing it.

Here's some of the conversation they had with ATC host Melissa:

There will be more on today's edition of ATC, and we'll add the as-broadcast version of the conversation to this post later.