Accessibility links
Remembering Mo Nabbous, 'The Face Of Libyan Citizen Journalism' : The Two-Way He became the local equivalent of Radio Free Europe or Voice of America as Benghazi freed itself from the Gadhafi regime. And over the weekend, Nabbous died while reporting — shot, it appears, by a Gadhafi regime sniper.

A reporter who lost his life trying to tell the world about what Moammar Gadhafi's forces were doing to the people of Libya is remembered today on All Things Considered.

NPR's Andy Carvin talks about Mohammed Nabbous, a man he came to know via the Web in the past month as Nabbous used his Libya al Hurra ("freedom") Livestream news channel to record some remarkable accounts of what was happening in Benghazi and elsewhere in eastern Libya.

As Andy tells ATC's Melissa Block, "all of a sudden, as Benghazi was trying to free itself from Gadhafi, you started hearing voices coming over the Internet and one of those first voices to come out was Mo."

Nabbous, Andy says, used Libya al Hurra to become "their local equivalent of Radio Free Europe or Voice of America, where he was trying to get the world to hear their point of view of what was going on. And as he did that, he basically became a reporter or even an anchor."

Then, Saturday night, Nabbous was killed. He was out reporting and it's thought that he was shot by a sniper loyal to Gadhafi.

Here's some of the conversation Melissa had with Andy. More will be on ATC this afternoon, and later we'll add the as-broadcast version to this post. (Update at 11:15 a.m. ET, March 23. We've made the audio file below "embeddable." Just click on the "speaker button" and a player should pop up that gives you the option of embedding the sound):

Andy, by the way, has been using Twitter and other social media tools to follow the work of people such as Nabbous. Click here to see Andy's work. 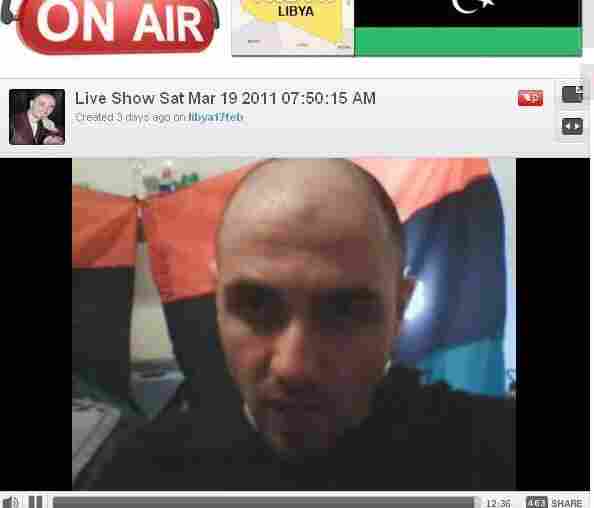