Accessibility links
Smithsonian Unveils Painting Of Pitching Great Pedro Martinez : The Two-Way In an interview with NPR's Robert Siegel, the greatest right-handed pitcher of his generation talked about the new portrait, as well as the childhood experience that still drive his charity work. 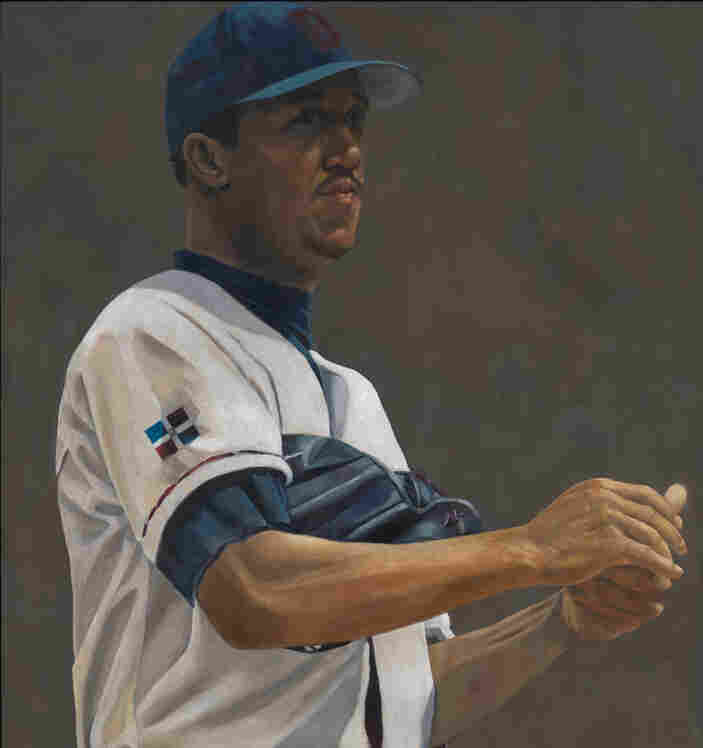 A section of Susan Miller-Havens' painting of Pedro Martinez. The painting was created in 2000 with oil and beeswax on Baltic birch Susan MillerHavens/The National Portrait Gallery hide caption 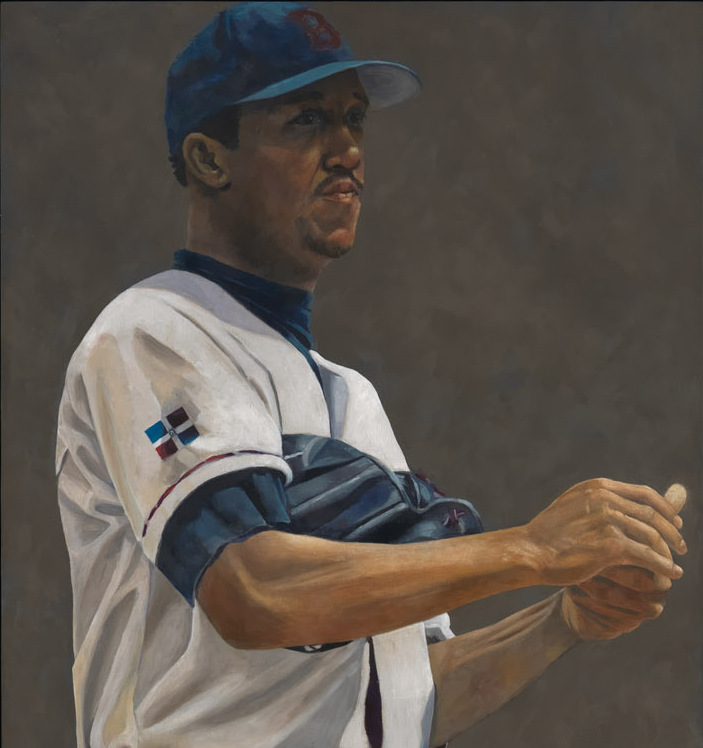 A section of Susan Miller-Havens' painting of Pedro Martinez. The painting was created in 2000 with oil and beeswax on Baltic birch

Pedro Martinez says that while painter Susan Miller-Havens worked on his portrait, she focused on his hands. She saw his long fingers and told him that he "used them to do art with my fingers."

As far as pitchers go, Martinez, in his 18 seasons in the major leagues, made some pretty amazing art with those fingers: The greatest right-handed pitcher of his generation, he won 219 games, had a career ERA of 2.93, struck out 3,154 batters and won the Cy Young Award three times.

Today, the Smithsonian's National Portrait Gallery added a 57 inch by 21 inch oil and beeswax painting of the pitcher to its collection. During a short speech at the unveiling in Washington, D.C., Martinez said while he has been in some pretty tough games, he had never "felt this much emotion."

After the ceremony, he spoke to NPR's Robert Siegel for tonight's edition of All Things Considered. Martinez talked about how his double jointed fingers helped his pitching, but he also talked about how he used his body and his gaze to reflect his intentions in the game:

Martinez said when he was a kid he was chosen to be the Domican Republic's representative in the Little League World Series. But his parents didn't have the 420 pesos, at the time about $9, to send him.

He told Robert that experience drives him in the work he does with his foundation, the Pedro Martinez and Brothers Foundation.

"I want to open doors," he said. "I'm going to make sure that anyone I can reach with the same opportunity to make the trip" makes it.

Martinez last pitched during the 2009 season for Philadelphia Phillies. He told Robert, he missed parts of the game, but not others:

One of the more surprising bits from the interview, is Martinez's connection to gardening:

We'll post the as-aired version of the interview later today. You can also listen to it when All Things Considered airs on your local NPR station.