Accessibility links
Architect Of The Internet, Paul Baran, Dies At 84 : The Two-Way Baran was the inventor of packet switching, or the idea that a piece of information can be cut into pieces, sent through different passageways and be put together at the end.

Architect Of The Internet, Paul Baran, Dies At 84

Architect Of The Internet, Paul Baran, Dies At 84 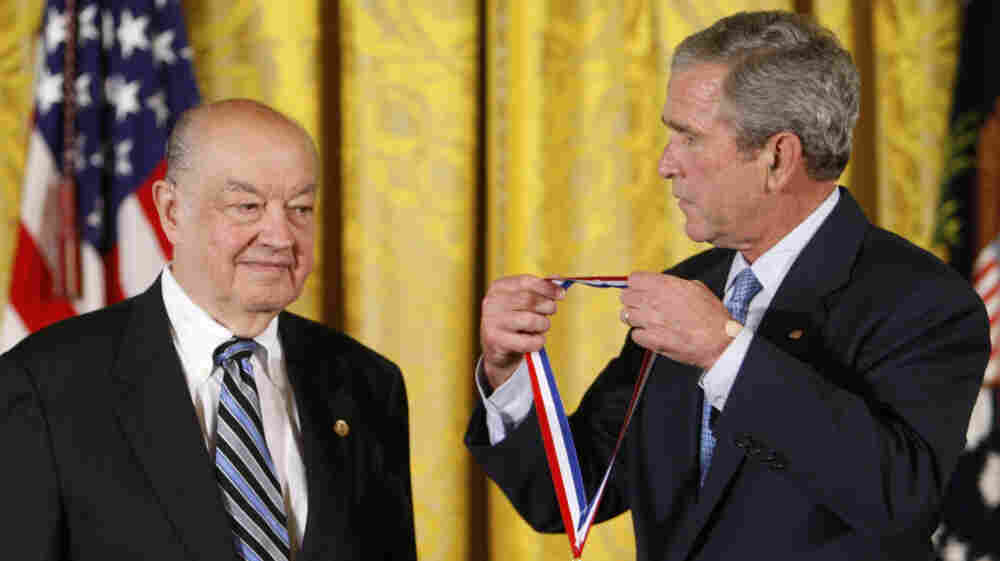 In a Sept. 29, 2008 file photo then President Bush presents Paul Baran a 2007 National Medal of Technology and Innovation in the East Room of the White House in Washington. Charles Dharapak/AP hide caption

In 1961, engineer Paul Baran sold a communications method called "packet switching" to the U.S. Department of Defense. It became the foundation of Arpanet, which was the foundation of the Internet and is still the way e-mails are delivered to your inbox, today.

Baran, reports The New York Times, died on Saturday at age 84 in his home in Palo Alto, Calif.

Forbes explains that in '50s and '60s, Baran was trying to find a way for communications to survive a nuclear attack:

What motivated the Polish-born Baran was stark fear of the Soviet Union. Talking to Forbes ASAP's George Gilder in 1997, Baran recalled a 1959 nightmare: A Soviet missile strike would wipe out America's communication system and thus America's ability to launch a massive retaliatory strike — the threat of which was the foundation of deterrence and peace.

What Baran came up with was packet switching, which Wired explains like this:

Breaking up a single message into smaller pieces, having them travel different, unpredictable paths to their destination, and only then putting them back together. It's called packet switching and it's how everything still gets gets to your e-mail inbox.

Of course this kind of thinking was revolutionary in an analog world. So much so that AT&T, the New York Times reports, repeatedly refused to work with Baran and Arpanet.

Here's how Baran explained the issue in a 2001 interview with Wired:

The response was most interesting. The story I tell is of the time I went over to AT&T headquarters — one of many, many times — and there's a group of old graybeards. I start describing how this works. One stops me and says, "Wait a minute, son. Are you trying to tell us that you open the switch up in the middle of the conversation?" I say, "Yes." His eyeballs roll as he looks at his associates and shakes his head. We just weren't on the same wavelength.

If you think in analog terms, the signal arrives instantaneously. If you think in digital terms, time moves very, very slowly, and you can do things like change the path while you're in the middle of a syllable. But it was a mental block. They didn't understand digital. It was mostly generational, but there were young analog guys who had the same problem. If a guy considered the model of transmission to be analog, transmission time was instantaneous. It was a hang-up that caused people to think I was bullshitting them or didn't know what I was talking about.

Baran is survived by his David, three grandchildren and his companion Ruth Rothman.