Accessibility links
White House: Budget Meeting 'Possible;' Boehner Says None Planned : The Two-Way But it's still not known whether Republican and Democratic lawmakers will agree to come to another meeting. If a deal isn't struck by midnight Friday, large parts of the federal government could shut down. 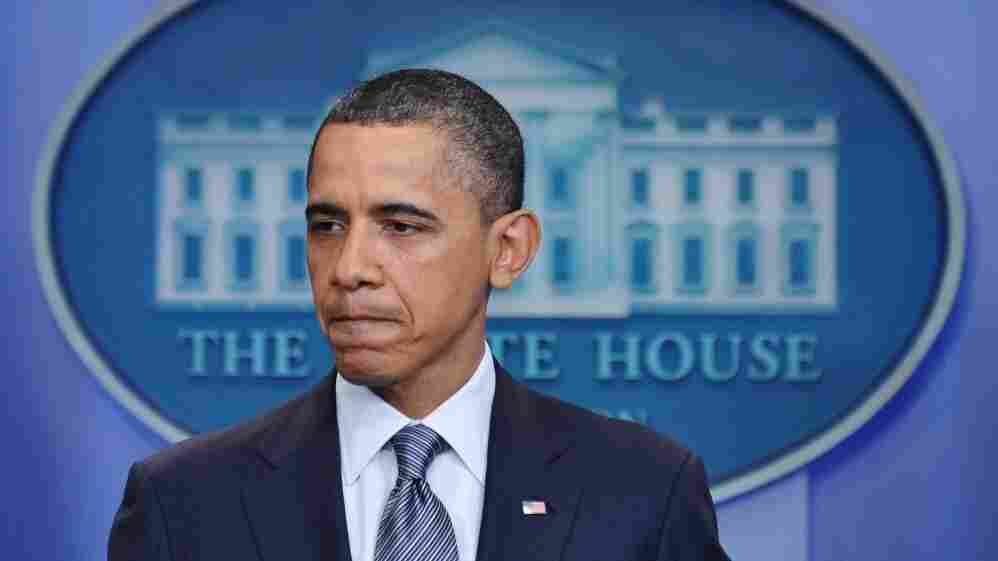 Come on back, he says.

While President Obama plans to be at a town hall later today in Pennsylvania, a "meeting with congressional leaders on the budget is still possible" today, White House communications director Dan Pfeiffer said this morning in a message he posted on Twitter.

As CBS News' Mark Knoller reports, though, there's "no word yet" on whether House Speaker John Boehner (R-OH) and Senate Majority Leader Harry Reid (D-NV) will ask for such a meeting today.

(Update at 8:45 a.m. ET: Reuters just reported that an aide to Boehner says there's no meeting scheduled for today.)

Yesterday, after a White House summit with Republican and Democratic lawmakers didn't break a deadlock in budget talks that threatens to force a government shutdown at midnight Friday, the president said he wanted House and Senate leaders "back here tomorrow."

As Politico says this morning, lawmakers are in for "an intense three days." On Morning Edition, NPR's Scott Horsley looked at where the talks stand — and at the Republican plan (unveiled Tuesday by Rep. Paul Ryan of Wisconsin) that aims to cut federal spending by more than $5 trillion over the next decade, in part by restructuring the Medicare and Medicaid programs.

Also on Morning Edition, Republican Sen. Bob Corker of Tennessee stopped short of endorsing Corker's plan, but said "what I like is he's actually proposing a solution." Ryan, he said, "has had the courage to lay something out there." The so-called "gang of six" Republican and Democratic senators may have other ideas, though, Corker said.

Democratic Sen. Kent Conrad of North Dakota told Morning Edition that he won't support Ryan's plan. Neither Ryan nor Obama, in Conrad's view, have yet put forward comprehensive plans that deal with the nation's long-term debt and deficit problems.

Update at 12:20 p.m. ET: Sen. Dick Durbin (D-IL), the No. 2 Democrat in the Senate, told reporters a short time ago that he's more hopeful today about the chances for a deal before Friday. "I feel better about it today than I did yesterday at the same time," he said, according to Reuters.