Accessibility links
How A Government Shutdown Would Play Out : The Two-Way While officials say essential jobs and duties wouldn't be affected, more than 800,000 civilian workers would be furloughed. Such tasks as processing paper tax returns would be suspended. Military personnel wouldn't get their paychecks. 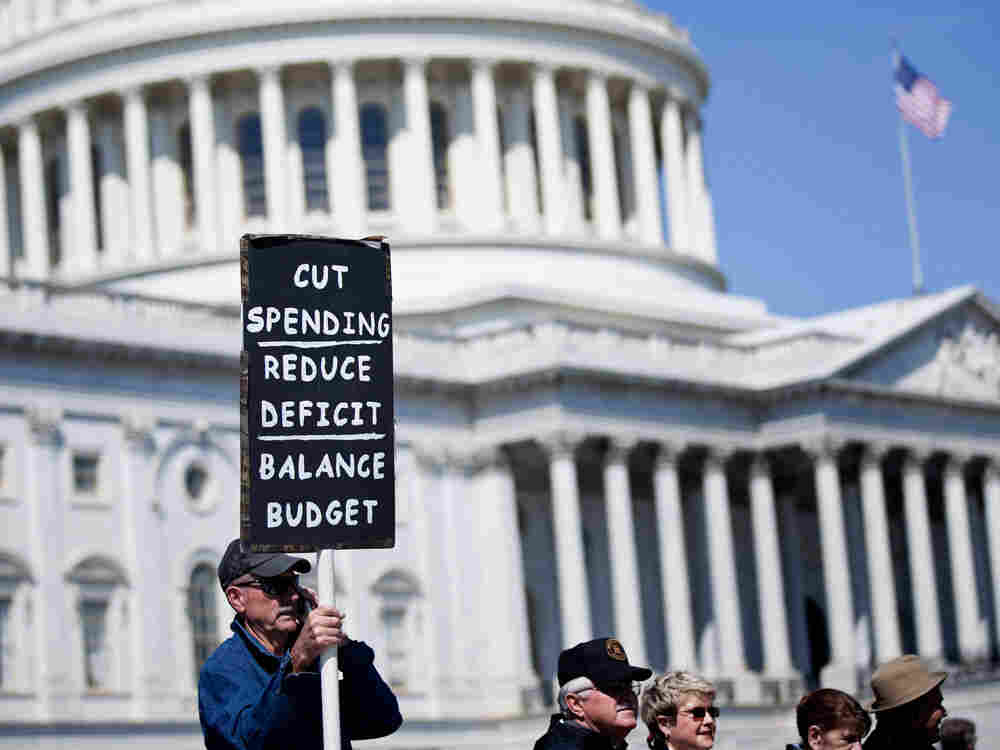 Tea Party activists gather on Capitol Hill on Wednesday. The federal government is facing a potential shutdown if Congress and the White House are not able to agree on a budget. Brendan Smialowski/Getty Images hide caption

The nation's military forces would continue working in the event of a government shutdown, senior government officials said Wednesday, but they would be expected to forego receiving any pay until Congress approves a budget for the current fiscal year.

But as many as 800,000-plus civilian federal workers — including those employed by the Department of Defense — would be furloughed if the government shuts down Friday at midnight for lack of funding.

As Congress and the White House continued today to negotiate on a budget while time ticks down to the end of the government's current budget authority, the officials, who spoke on background, laid out how a shutdown would affect departments and agencies.

Tax refunds for paper-filers would also be delayed. National Parks and Smithsonian Institution museums would close. And the annual National Cherry Blossom Festival Parade, scheduled for Saturday in Washington, D.C., would be cancelled.

Activities that would continue, they said, include those "necessary for the safety of life and protection of property," including the military, law enforcement, air traffic control and Department of Homeland Security functions.

But Medicare recipients would continue to receive their coverage because it is funded through the program's trust fund. And the Veteran's Administration would remain open because it operates under a multi-year funding calendar.

Other questions and answer provided by the officials:

-- Q: How would a shutdown affect taxpayers, with the approach of the April 18 federal filing deadline?

-- Q: What happens to the activities of the Environmental Protection Agency, including its monitoring of radiation from Japan's crippled Fukushima Dai-Ichi nuclear power plant?

A: The EPA will cease issuing permits, and work on environmental impact statements would be slowed. But the agency will continue work deemed essential to protect life and property.

-- Q: Will there be any change in how Social Security claims are handled?

A: The Social Security Administration is still finalizing its plan. Current beneficiaries will continue to get their benefits, as they did in during the last government shutdown, in 1995.

-- Q: What happens to Medicare billing, and the National Institutes of Health?

A: Medicare is funded, at least for a period of time. Other activities such as the work of the Department of Health and Human Services would be suspended. The NIH clinical center would stop accepting new patients, and would suspend starting new clinical trials. Clinical trials already underway would continue.

-- Q: Will military personnel still get paid on time?

A: They will be paid through Friday, and will continue to work after that and "earn money." But, they will not receive paychecks until Congress approves a spending plan.

-- Q: How would a shutdown affect civilian workers at the Defense Department?

A: They would be subject to the same guidelines as other civilian employees — furloughed, unless they are determined to be essential to the safety of life or protection of property. A significant number would be furloughed.

Q: What would be the effect on White House employees?

A: The same rules would apply to them as to other civilian employees. Officials say they anticipate significantly lower staffing at the White House and across all agencies.

Q: How would a shutdown affect the other branches of government — Congress and the judiciary?

A: Because no appropriations bills for this year have been acted on, both Congress and judicial branch will be similarly affected.