Accessibility links
Scientists Find Oil From Blown-Out BP Well On Dead Dolphins In Gulf : The Two-Way While a small number of 293 dead dolphins had oil on them, the cause of the death is still being investigated.

For about the past year, some 293 dolphins have washed ashore in the Gulf Coast. Federal scientists confirmed yesterday that a small number of the animals had oil on them that came from BP's Deepwater Horizon, which exploded in April of 2010.

Six of the dolphins that washed up had oil on them. Chemical tests later showed that the oil was from the BP well, said Blair Mase, a NOAA official. Five of those dolphins were dead, she said.

In addition, nine other dolphins washed up with a substance on them that NOAA officials suspect was oil, but the source of that substance hasn't been determined, she said.

"It is significant that even a year after the oil spill we are finding oil on the dolphins, the latest just two weeks ago," Blair Mase, southeast marine mammal stranding coordinator for NOAA Fisheries, told Reuters. 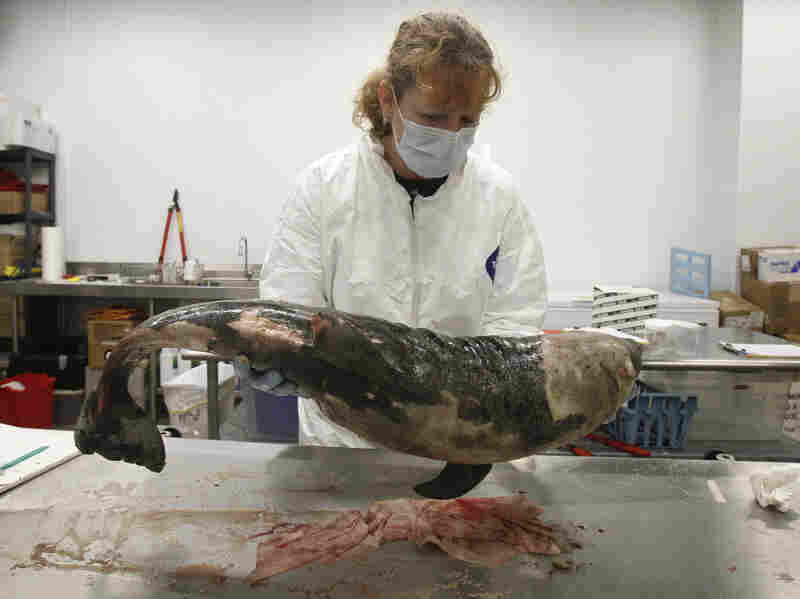 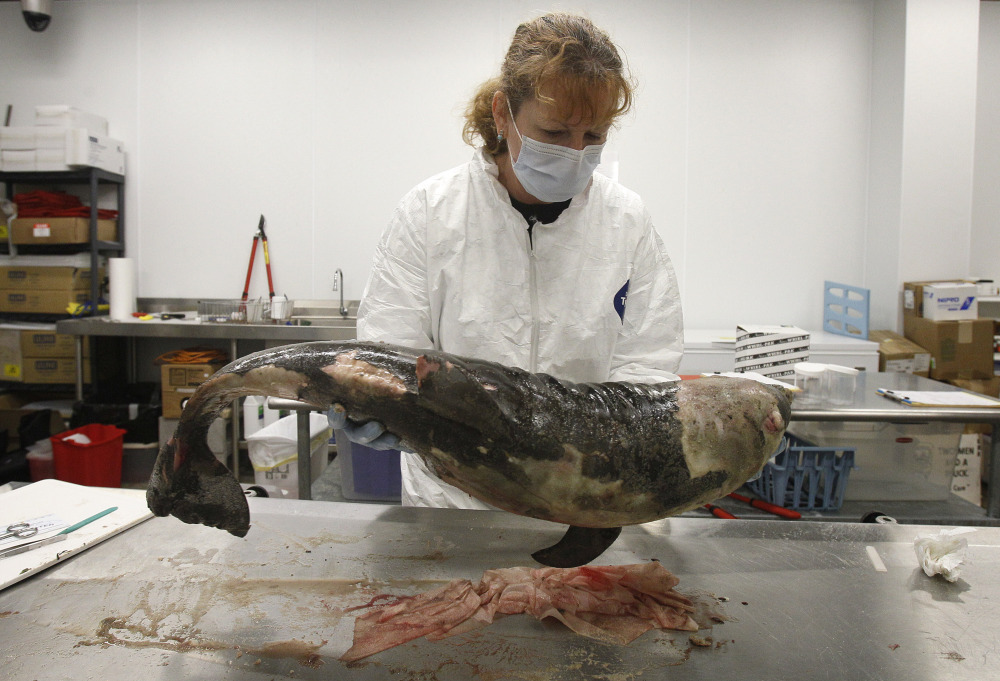 Institute for Marine Mammal Studies veterinary technician Wendy Hatchett lifts a dead bottlenose dolphin that was found on Ono Island, Ala. in February.

Now, it's important to note, that scientists still haven't determined the cause of death for the dolphins. The Sarasota Herald Tribune reports Mase added that even though oil was present, "it may not be the cause of death."

CNN reports that since mid-March, 87 dead sea turtles have also been found along the coast.

Another scientist, reports the Tribune, said:

Most of the turtles probably died from acute poisoning or "forced submergence," such as drowning in fishing gear, said Barbara Schroeder, NOAA Fisheries National Sea Turtle Coordinator. Schroeder said scientists have found no evidence of toxic algae that could have caused the deaths. She said the agency is focusing its attention on the fishing industry, especially shrimp trawling. Tissue samples will also be tested for toxins.

But the number of dead dolphins is rare enough that NOAA has designated the deaths as an "unusual mortality event."