Accessibility links
After 35 Years, Woman Regains Her Voice; Now, She Has 'So Much' To Say : The Two-Way Jan Christian's story is also one of the love of her family over the many years when she could barely whisper. She had to learn to express herself in other ways. They had to learn to really, really listen.

Listen
After 35 Years, Woman Regains Her Voice; Now, She Has 'So Much' To Say

"There's so much that I have inside of me that I wanted to get out," Jan Christian of Alexandria, Ky., told All Things Considered host Michele Norris today. 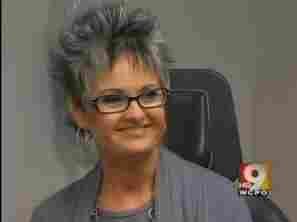 Thirty-five years ago, at the age of 17, Christian's windpipe was crushed when she was injured in a car crash. As Cincinnati's WCPO-TV reported last week, "she couldn't speak above a whisper and for years, avoided the awkwardness of trying to explain why."

But doctors at University Hospital in Cincinnati were, after several recent surgeries, able to give Christian back her voice.

Christian says it's a thrill to "be louder and more clear. ... And now I'm able to express myself."

On having so much to say

It's marvelous, she says, to be able to yell a bit at her children's games. When her kids were playing soccer in years past, "they would score and I couldn't yell so I would just cry."

And she can now more easily tell her husband Randy, she adds, of her love for him.

Michele's conversation with Jan and Randy includes some touching moments about their relationship, from their first meeting (at a disco dance) to when she knew that she loved him — first, when he cried over the death of his pet rabbit, and soon after when he kissed the back of her hand when they were on a date. "I'm going to marry that guy," she told herself.

Much more of Michele's conversation with Jan and Randy is due on today's broadcast. Click here to find an NPR station that broadcasts or streams the show. And later today, we'll add the as-aired version of the interview to the top of this post.