Accessibility links
Teen Faked Pregnancy For Project; Was Made To Feel 'Alone And Ashamed' : The Two-Way Seventeen-year-old Gaby Rodriguez of Toppenish, Wash., wanted to explore stereotypes faced by young mothers. When she revealed this week what she had done, students and teachers alike were stunned.

Teen Faked Pregnancy For Project; Was Made To Feel 'Alone And Ashamed'

Teen Faked Pregnancy For Project; Was Made To Feel 'Alone And Ashamed'

Since the Yakima Herald-Republic wrote Wednesday about how 17-year-old A-student Gaby Rodriguez pretended to be pregnant all school year, as a social experiment about stereotypes faced by teen mothers, the story has gone national. 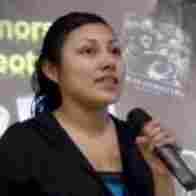 ABC News reported about it this morning. Gaby found, the network says, that "for months, some students left her feeling alone and ashamed."

The Yakima newspaper says that only a few people knew what Gaby was doing — including her mother, her boyfriend and the school's principal. The Herald-Republic adds that:

"Her teachers and fellow students, except for her best friend, didn't realize they were part of a social experiment. Neither did six of her seven siblings — including four older brothers — her boyfriend's parents, and his five younger brothers and sisters."

Next, the newspaper writes:

"Gaby will present her research to a board of community members in May. It will include photos and video from Wednesday's assembly. And Gaby still needs to finish writing her report."