Accessibility links
'The T-Mobile Royal Wedding' Video: 11 Million Views And Counting : The Two-Way It isn't close to the nearly 65 million views that its inspiration — JK Wedding Entrance Dance — has collected since July 2009. But the spoof of Friday's royal wedding has been seen by millions in just the past 10 days. 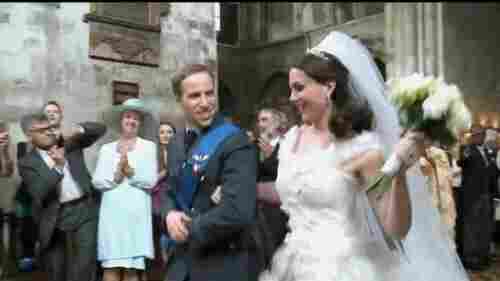 It isn't close to the nearly 65 million views that its inspiration — JK Wedding Entrance Dance — has collected since July 2009.

But The T-Mobile Royal Wedding has topped 11 million views in just 10 days. Not bad. And it's a nice bit of viral marketing for the cellphone company.

T-Mobile used London's St. Bartholomew the Great as a stand-in for Westminster Abbey, The Telegraph reports. Using the church may not go over well with the Bishop of London, the newspaper says. He's already rebuked the Rev. Martin Dudley, St. Bartholomew's priest, for marrying two homosexual priests. Now, Dudley may have shown some disrespect to the upcoming royal wedding — and the Church of England has already suspended one of its clergy, Bishop Pete Broadbent, because he said William and Kate are "shallow celebrities."

So, allowing some look-alike actors to dance their way up the aisle in imitation of the royals may not please the bishop.

In case you haven't seen it, or want to see it again, here's the "original" that inspired this fun: