Accessibility links
Britons Eagerly Await The Royal Wedding : The Two-Way From the hours leading up to the wedding and on through the traditional "first kiss," we'll be following the story.

It's here. Our first "wedding of the century." Britain's Prince William and Kate Middleton become future-king and future-queen today at Westminster Abbey.

While Linda Holmes of Monkey See tweets and blogs from London, we're posting throughout the day — starting here with the pre-ceremony news and color. This post will refresh at least every five minutes:

To make it easier to follow the wedding itself, we'll be live-blogging the ceremony in a new post. 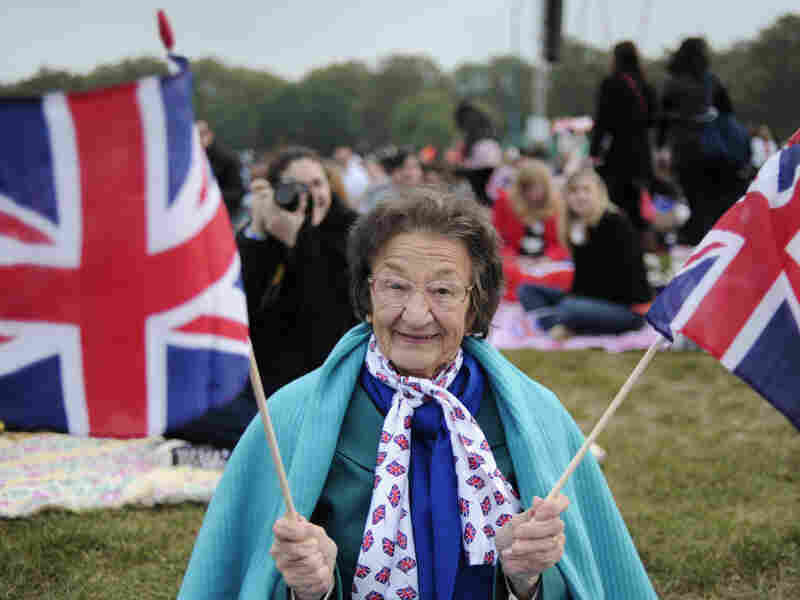 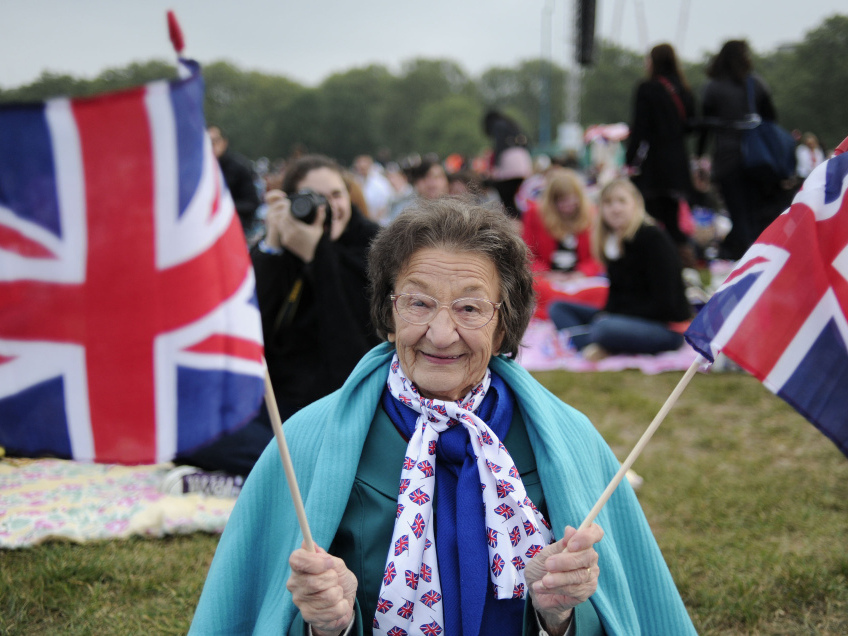 A fan holds British Union Jack flags as people gather to watch the wedding of Britain's Prince William and Kate Middleton on big screens in Hyde Park in central London.

"Mrs. Carole Middleton is wearing a sky blue wool crepe coatdress with matching satin piping and passementerie at the waist and cuff over a sky blue silk shantung 'Sydney' day dress with short pleated sleeves and pleated pockets,"according to the official wedding website. "The dress and coatdress are by Catherine Walker. Mrs. Middleton's hat is by Berkshire-based Jane Corbett."

The princes are inside now. On the BBC, they just said that Harry organized a stag party for his brother with much "diligence" and enthusiasm. But the details of what went on are secret.

Accompanied by his brother, Prince Harry, the groom just headed by car to Westminster Abbey. He's resplendent in red — in, as we said earlier, the uniform of an Irish Guards officer.

Update at 5 a.m. ET. One Hour To Go Until The Wedding.

Elton John and his partner David Furnish have taken their places in the abbey. John's Candle in the Wind tribute to Williams' mother Diana at her funeral is a poignant moment many will remember.

Westminster Abbey has a pdf of the wedding's "Official Programme" posted online here. It includes all the vows, prayers and hymns.

Reminder: There is no "you may now kiss the bride" moment. By tradition, their "first kiss" will be on the balcony of Buckingham Palace. That's scheduled to happen around 8:25 a.m. ET.

As you might expect, there's meaning to all the medals and sashes he will have on and how they are arranged. For instance, he will have "aiguillettes (ornamental braiding): Worn on the right shoulder as he is Aide-de-Camp (ADC) to The Queen. In any other case it would be worn on the left shoulder."

Soccer superstar David Beckham and his wife Victoria have arrived at Westminster Abbey.

We don't want you to leave us, of course, but among the many other ways to follow what's happening will be the live stream at The Royal Channel ("the official channel of the British monarchy"). Its show starts at 5 a.m. ET.

And as for Kate's dress, Clarence House (Prince Charles' official residence) says the details will be released first on its Twitter page.

The royals have clearly gotten Web-savvy.

Update at 4 a.m. ET. What The Prince Will Be Wearing:

Kate's wedding dress is still a secret, but The Associated Press reports that "Prince William will be wearing the scarlet tunic of an Irish Guards officer. Royal experts are saying his choice of ceremonial military dress signals his desire to reinforce his image as a dedicated military man, rather than the club-hopping party boy he was once characterized as."

We can see on the news networks' coverage that the doors to Westminster Abbey have been opened and the guests are starting to take their places. We're still more than two hours from the bride's arrival.

William will now have three titles, according to this statement from the queen's press office. He is "Duke of Cambridge, Earl of Strathearn and Baron Carrickfergus."

Carrickfergus, the way, the oldest town in Northern Ireland's County Antrim. According tot he queen's statement, "the word means Rock of Fergus and as an urban settlement it predates Belfast. It is on the north shore of Belfast Lough and is the site of Carrickfergus Castle. which dates from circa 1180 and is one of the best preserved Castles in Ireland."

More breaking news from the BBC: "Prince William has been given the title of the Duke of Cambridge by the Queen. His wife will be Her Royal Highness the Duchess of Cambridge."

Update at 3 a.m. ET. Rain May Hold Until After The Wedding:

Speaking of the weather, according to The Guardian, "forecasters predict lunchtime showers for the capital that could put a dampener on the royal wedding kiss — planned for the balcony of Buckingham Palace at 1:25 pm [8:25 a.m. ET]. But Tom Morgan, a weather forecaster at the Met Office, said there was no risk of showers before lunchtime."

So, that does indeed bode well for the planned open carriage ride for the couple from Westminster to Buckingham Palace after the ceremony.

We're about three hours from Kate's arrival at Westminster Abbey and the start of the ceremony, but as you would expect "tens of thousands of people have lined the royal wedding route hours," The Associated Press reports, "with the crowd in a jovial mood despite steely gray skies over London. Many were wrapped in British flags and others painted their faces with the Union Jack. Thousands camped out overnight in front of Westminster Abbey and Buckingham Palace."

2:30 a.m. ET. An Open Carriage After All? We've got our first news "bulletin" of the day. According to the BBC, "Buckingham Palace has decided to brave the weather and is rolling out the open-topped 1902 State Landau carriage for the married couple's journey from the abbey."

As we reported Tuesday, there's a good chance of rain in London today (rain in London, imagine that?). And there was talk that the newlyweds wouldn't be able to take the open carriage from the abbey to Buckingham Palace after the ceremony — as William's parents did in 1981. But if the BBC's right, they may brave the elements no matter what.