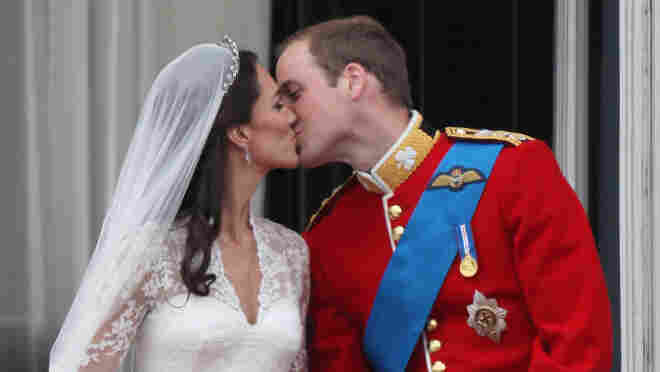 Their Royal Highnesses Prince William, Duke of Cambridge and Catherine, Duchess of Cambridge kiss on the balcony at Buckingham Palace after their wedding. Peter Macdiarmid/Getty Images hide caption 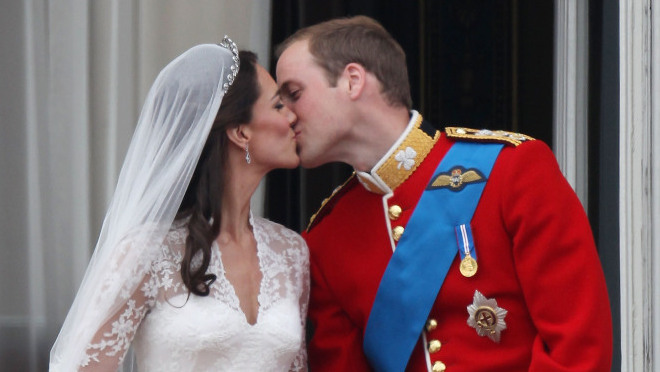 Their Royal Highnesses Prince William, Duke of Cambridge and Catherine, Duchess of Cambridge kiss on the balcony at Buckingham Palace after their wedding.

It's happened. Our first "wedding of the century." Britain's Prince William and Kate Middleton were married today at Westminster Abbey.

While Linda Holmes of Monkey See tweeted and blogged from London, we posted throughout the day. We started with the pre-ceremony news and color and we stayed with the story through the couple's "first kiss." Scroll down and read "up" if you wish to see how the story developed.

And for those of you who were up and reading with us as a very early hour: thanks!

Update at 8:45 a.m. ET. And After A Second Kiss And A Flyover, They Head Back Inside:

The newlyweds treated the crowd outside (and those of us watching on TV) with a second quick kiss just before some World War II-era, "Battle of Britain" fighters passed over the palace. Then they headed inside Buckingham Palace for a reception.

With the public festivities now over, we're going to wrap up this post. Thanks for following along with us. If you want to see how the day developed, start with our earlier post and then return here.

And there it is! William and Kate, on the balcony at Buckingham Palace with Queen Elizabeth, Prince Charles, Prince Harry and other members of the couple's families surrounding them, just exchanged their "first kiss."

An interesting note from the palace:

"In line with Royal Tradition, the bridal bouquet will end up on the Grave of the Unknown Warrior."

That's at Westminster Abbey and holds remains of a soldier "brought from France to be buried here on 11 November 1920."

We're less than 10 minutes away, if they're still on schedule, from the couple's appearance on the balcony at Buckingham Palace and what's expected to be their "first kiss."

William and Kate wrote a prayer that was read during the service. Here it is, via the official royal wedding website:

"God our Father, we thank you for our families; for the love that we share and for the joy of our marriage.

"In the busyness of each day keep our eyes fixed on what is real and important in life and help us to be generous with our time and love and energy.

"Strengthened by our union help us to serve and comfort those who suffer. We ask this in the Spirit of Jesus Christ. Amen."

For more images from the day, see this photo gallery.

Courtesy of The Associated Press, here's a short video clip of the couple's exchange of vows.

According to the BBC: "The couple briefly held hands in the carriage as it passed through the gateway, but cameras caught the personal exchange — before the waving resumed."

William and Kate are now at Buckingham Palace. The next key moment comes around 8:25 a.m. ET, when they're expected to appear on one of the balconies and will have their official "first kiss."

While Prince William's back is straight as he rides past the crowds, his best man — Prince Harry — is a couple carriages behind and looks to be having a more relaxed ride. He's leaning forward, looking happy.

"The 1902 State Landau was specifically built for King Edward VII in 1902 and was intended to be used at his Coronation," the palace says. "It will carry the Bride and Bridegroom on their way back from the service at Westminster Abbey to Buckingham Palace."

The bride seems to have it down. As she passes by the cheering crowds she's doing that stately royal wave.

Before helping Kate into the carriage, the prince paused to add white gloves to his ensemble.

They look, as you might imagine, quite happy — and perhaps somewhat relieved.

The open carriage is drawing up to the entrance and the crowd is going nuts. Bells are ringing as they leave the abbey.

With a nod from the queen on their way by, William and Kate are heading to the door. Expect quite a greeting from the crowd when they emerge. It looks like he's being really, really careful not to step on her dress.

The prince and his new princess are due to emerge from Westminster Abbey at 7:15 a.m. ET.

From the BBC's Sarah Bell: "With impeccable timing, the sun has come out in central London."

As the "Official Programme" puts it, "The Bride and Bridegroom and their witnesses move to the Shrine of St. Edward the Confessor for the signing of the Marriage Registers."

Update at 6:50 a.m. ET. A Prayer From The Archbishop For Children:

"O merciful Lord and heavenly Father, by whose gracious gift mankind is increased; bestow, we beseech thee, upon these two persons the heritage and gift of children; and grant that they may see their children christianly and virtuously brought up to thy praise and honour, through Jesus Christ our Lord. Amen."

The "Right Reverend and Right Honourable" Dr. Richard Chartres, the Lord Bishop of London, tells the royal couple and guests that "this is a joyful day" and that "it is good that people in every continent are able to share" in this "day of hope."

"I appeal to you, brothers and sisters, by the mercies of God, to present your bodies as a living sacrifice, holy and acceptable to God, which is your spiritual worship. Do not be conformed to this world, but be transformed by the renewing of your minds, so that you may discern what is the will of God — what is good and acceptable and perfect. Let love be genuine; hate what is evil, hold fast to what is good; love one another with mutual affection; outdo one another in showing honour. Do not lag in zeal, be ardent in spirit, serve the Lord. Rejoice in hope, be patient in suffering, persevere in prayer. Contribute to the needs of the saints; extend hospitality to strangers. Bless those who persecute you; bless and do not curse them. Rejoice with those who rejoice, weep with those who weep. Live in harmony with one another; do not be haughty, but associate with the lowly; do not claim to be wiser than you are. Do not repay anyone evil for evil, but take thought for what is noble in the sight of all. If it is possible, so far as it depends on you, live peaceably with all."

"Forasmuch as William and Catherine have consented together in holy wedlock, and have witnessed the same before God and this company, and thereto have given and pledged their troth either to other, and have declared the same by giving and receiving of a ring, and by joining of hands; I pronounce that they be man and wife together, In the name of the Father, and of the Son, and of the Holy Ghost. Amen,"

The prince slipped the wedding ring on his bride's finger.

"I, William Arthur Philip Louis, take thee, Catherine Elizabeth, to my wedded wife, to have and to hold from this day forward, for better, for worse: for richer, for poorer; in sickness and in health; to love and to cherish, till death us do part, according to God's holy law; and thereto I give thee my troth."

"I, Catherine Elizabeth, take thee, William Arthur Philip Louis, to my wedded husband, to have and to hold from this day forward, for better, for worse: for richer, for poorer; in sickness and in health; to love and to cherish, till death us do part, according to God's holy law; and thereto I give thee my troth."

William and Kate just said their "I wills."

Update at 6:17 a.m. ET. The archbishop of Canterbury to William and Kate:

"I require and charge you both, as ye will answer at the dreadful day of judgement when the secrets of all hearts shall be disclosed, that if either of you know any impediment, why ye may not be lawfully joined together in Matrimony, ye do now confess it. For be ye well assured, that so many as are coupled together otherwise than God's word doth allow are not joined together by God; neither is their Matrimony lawful."

William and Kate are now at the altar. During the procession of the bride, the choir and guests sang:

"I was glad when they said unto me: We will go into the house of the Lord.
"Our feet shall stand in thy gates: O Jerusalem.
"Jerusalem is builded as a city: that is at unity in itself.
"O pray for the peace of Jerusalem: they shall prosper that love thee.
"Peace be within thy walls: and plenteousness within thy palaces"

Kate's dress was designed by Sarah Burton at Alexander McQueen, the palace says. There's much more about it posted here:

The bride has arrived, to huge cheers from the crowds outside.

Kate Middleton just left for the abbey, so we've had a glimpse of the dress — but just a glimpse.

Looking quite happy and radiant in her yellow hat and dress, Queen Elizabeth has entered the abbey.

According to the "Official Programme," she is to be welcomed with March from The Birds by composer Charles Hubert Hastings Parry (1848–1918).

The groom's father, Prince Charles, just entered Westminster with his wife Camilla, the duchess of Cornwall. As we reported earlier the prince is wearing the Royal Navy Number One Dress (Ceremonial).

"Mrs. Carole Middleton is wearing a sky blue wool crepe coatdress with matching satin piping and passementerie at the waist and cuff over a sky blue silk shantung 'Sydney' day dress with short pleated sleeves and pleated pockets," according to the official wedding website. "The dress and coatdress are by Catherine Walker. Mrs. Middleton's hat is by Berkshire-based Jane Corbett."

The princes are inside now. On the BBC, they just said that Harry organized a stag party for his brother with much "diligence" and enthusiasm. But the details of what went on are secret.

Accompanied by his brother, Prince Harry, the groom just headed by car to Westminster Abbey. He's resplendent in red — wearing, as we said earlier, the uniform of an Irish Guards officer.