Accessibility links
Space Tourist Obama Orbits Political Challenges In Fla. : The Two-Way President Obama was supposed to become only the third sitting president to witness a human space launch. Instead, with NASA scrubbing the launch, Obama's visit became a tour and chance to soften a tough crowd. 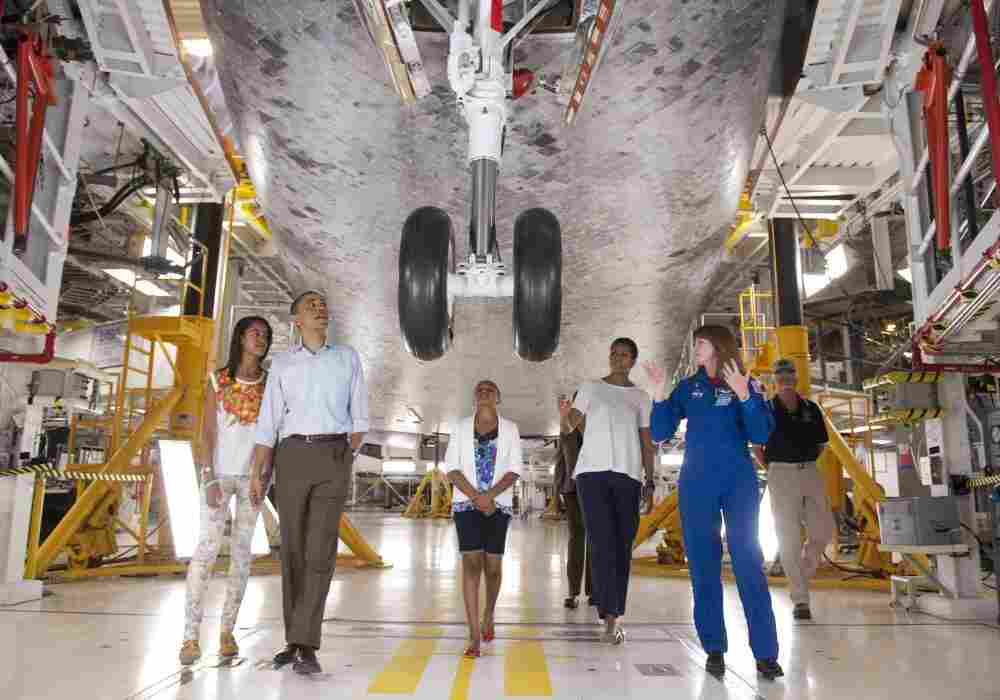 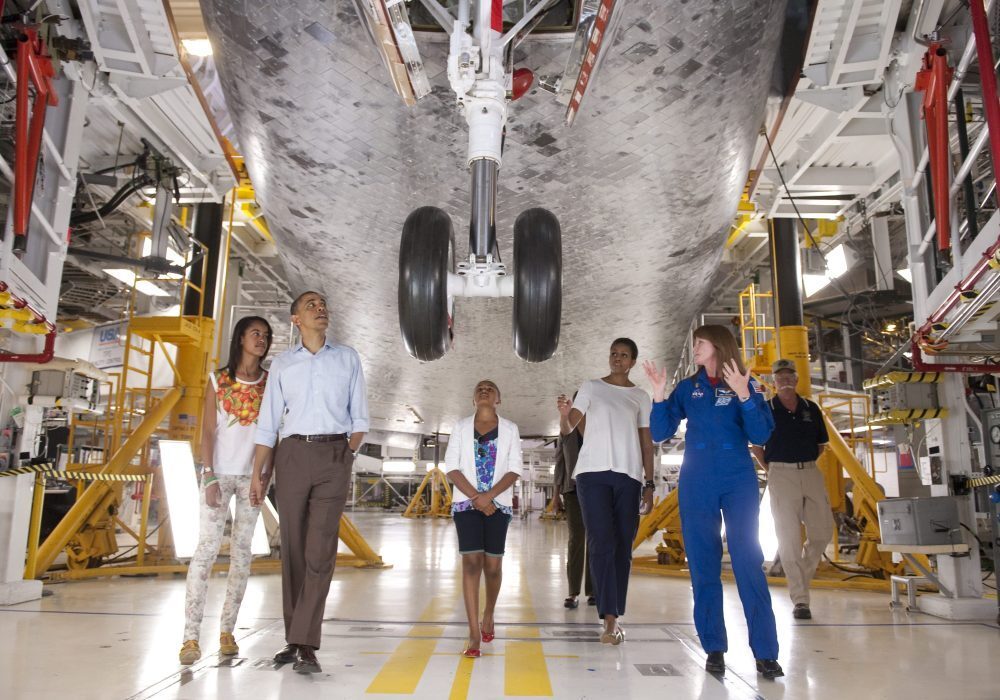 Thursday may have officially been Take Your Daughters and Sons to Work Day, but Malia and Sasha Obama picked an interesting day to follow their father around.

Thanks to a technical glitch, the first family did not get to see space shuttle Endeavour lift-off for a final 14-day mission, as originally planned. But they did get an up-close look at Endeavour's sister ship, Atlantis, which is being prepped for the shuttle program's final mission this summer. The tour was guided by Astronaut Janet Kavandi and a NASA contractor who works on the shuttle's system of protective tiles. Afterward, the Obama family visited the launch control team.

For Giffords, today's planned launch was supposed to be her first public appearance since the Arizona Democrat was gravely injured in January's mass shooting at a Tucson grocery store.

"I bet you were hoping to see a rocket launch today," Kelly told the president, according to a White House official who briefed reporters traveling with the president.

"We were hoping to see you," Obama replied

When will Giffords' husband and his five crew mates get off the ground? We should hear more shortly when NASA officials brief the press.

Had today's launch gone off as planned, Obama would have only been the third sitting president to attend a human space launch. Bill Clinton was on hand in 1998 for the launch of the shuttle Discovery mission that carried former Mercury astronaut and Ohio Senator John Glenn back into space. And Richard M. Nixon attended the Apollo 12 moon mission liftoff in 1969.

More than 750,000 disappointed spectators were expected to view Friday's launch — a temporary boon for Florida's "Space Coast," where highways were jammed and hotels were sold-out for miles.

". . . Obama had a parallel purpose for the trip — to ease the political damage of job losses in the space industry and reaffirm his commitment to space exploration, which looms large in a high-unemployment battleground state that looks to the skies for its future, self-image and economic well-being.

"Obama sparked a political backlash last year with a fundamental reordering of NASA. He sought to scrap a planned return to the moon and turn to private companies and foreign nations to transport astronauts to the International Space Station. The proposal left the industry feeling uncertain about its future, despite his efforts to protect the agency's funding and plot a new course to put astronauts on an asteroid and Mars within 25 years."

Politico noted that the president's political challenge in Florida was complicated by the recent congressional budget deal. The final agreement did not include millions of dollars promised earlier to help laid-off NASA workers and contractors.

One of those contractors is tile specialist Terry White, the United Launch Alliance employee who led the first family on their tour of shuttle Atlantis. A NASA spokeswomen told the press pool following the president that White is slated to be laid off and take retirement.