Accessibility links
Endeavour Launch Scrubbed Because Of Technical Issue : The Two-Way Because of problem with two heaters on one of the shuttle's Auxiliary Power Units, a launch will not happen before Monday.

NPR's Mark Stencel, who is at Cape Canaveral, reports NASA has scrubbed Endeavour's launch for at least 72 (updated) hours. On its twitter account NASA said it was working to fix two heaters associated with the shuttle's auxiliary power unit 1.

The crew, Mark reports, was in the Astrovan headed to the shuttle and when news came in, it turned back around to take them back to the crew quarters. NASA said it would begin draining the external fuel tank. "Engineers will assess the issue," NASA announced on Twitter, and will give an update on the situation in press conference later today.

We'll keep updating this post with dispatches from Mark, so check back.

NASA won't know until midday Sunday whether the problem that kept shuttle Endeavour moored to its launch pad Friday will delay its farewell mission for just a few days or possibly longer.

Shuttle Launch Director Michael Leinbach told reporters here at the Kennedy Space Center that Endeavour and its crew could be ready to fly by Monday afternoon, depending on what caused an electrical heating system to malfunction in the hours before Friday afternoon's scheduled launch time.

But a more complicated problem with the heaters could delay the start of Endeavour's final mission until May 7 or later. That's when the shuttle team needs to stand down for at least a day to make way for the scheduled launch of a military satellite from the the nearby Cape Canaveral Air Force Station.

Leinbach said technicians won't be able to evaluate the problem until they can peek into a rear compartment on Endeavour sometime after midday Saturday, once they finish the daylong process of draining the shuttle's massive fuel tanks.

Friday's malfunction involved heaters used to warm the hydrazine fuel that powers the shuttle's hydraulic steering systems. Those systems move the three bell-shaped liquid-fuel engines at the back of the orbiter. They also move the surfaces that allow Endeavour's crew to fly the ship and land it like a large unpowered airplane — either at the end of a mission or in an emergency shortly after launch.

Leinbach said he thought the problem could be fixed in time for a Monday launch attempt if it turns out to involve faulty thermostats. A failure with a related circuit box would require more invasive repairs that would probably delay the flight until after the scheduled military launch on May 6.

Robert D. Cabana, director of the Kennedy Space Center, said canceling Friday's launch was disappointing, especially since President Obama and his family planned to attend. But Cabana also said the decision was the right call.

There were lots of reasons why this space launch was getting so much attention. One of them was that it was supposed to be Rep. Gabrielle Giffords' first public appearance since she was gravely injured in a January shooting rampage.

Mark reports that President Obama and first lady Michelle Obama met with Giffords for about 10 minutes:

"I bet you were hoping to see a rocket launch today," Kelly told the president, according to a White House official who briefed reporters traveling with the president.

"We were hoping to see you," Obama replied.

Endeavour may not be lifting off this afternoon to begin its final mission, but NASA still got a big landing. President Obama arrived at the Kennedy Space Center this afternoon. But its doubtful he'll be able to stick around long enough to watch the next launch attempt.

With Endeavour's final 14-day mission on hold for at least 72 hours, the next launch window opens on Monday afternoon (between 2:28 and 2:34 p.m. ET), with subsequent opportunities earlier in the afternoon on Tuesday and Wednesday. Whether Monday is realistic may be more clear after a NASA press briefing later this afternoon.

If troubleshooting the electrical problems that scrubbed Monday's launch takes longer to nail down, more launch windows are available between May 7 and May 11. May 6 is being held to launch a military satellite atop a United Launch Alliance Atlas 5 rocket from the nearby Cape Canaveral Air Force Station.

Among the most disappointed people here are the dozens of Twitter users invited to provide running online commentary from the space center's press area, three miles from the launchpad. Many will not be able to extend their stays. "It's been a blast," wrote Dave Schumaker, of the official NASA Tweetup participants, who said he was sadly making plans to head home for California on Saturday.

NASA, reports Mark, has just revised the time it'll take to get the shuttle in working order. It will be at least 72 hours before the next try. On her Twitter account Representative Gabrielle Giffords' staff just tweeted this:

Staff: Bummed about the scrub!! But important to make sure everything on shuttle is working properly.

On its live blog, Florida Today reports that the fix will be time-consuming:

Technicians hope to begin accessing the orbiter's aft compartment tomorrow afternoon, and will need to build some platforms to work in the right area.

The Houston Chronicle's Eric Berger reports on the complexity of the issue at hand:

During the next day technicians need to gain access into the aft compartment of Endeavour to diagnose the problem, and this cannot be done while the shuttle is fueled. The shuttle's external tanks were filled earlier this morning and they must now be drained.

The 48-hour delay will come as a huge disappointment to the estimated 750,000 people who crowded the east coast of Florida to watch the launch this afternoon, including President Obama and Congresswoman Gabrielle Giffords.

Giffords' husband, Mark Kelly, is the commander of mission STS134.

At 3:47 p.m. ET., the shuttle Endeavour is set to launch on its 25th and final flight. The launch is also the penultimate space shuttle mission. The 30-year-old shuttle program is set to end when Atlantis launches in June.

Last night, reports Florida Today, stormy weather delayed the retraction of a service structure that surrounds the shuttle at Kennedy Space Center. As of, now, however the launch is still ago.

NASA released this stunning photo of the Endeavour on its final night in waiting amid a thunderstorm: 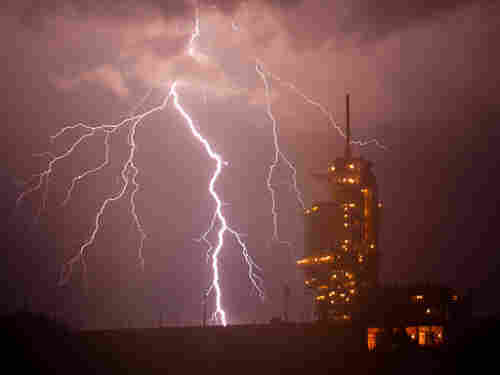 The space shuttle Endeavour is seen on launch pad 39a as a storm passes by prior to the rollback of the Rotating Service Structure (RSS), Thursday, April 28, 2011, at Kennedy Space Center in Cape Canaveral, Fla. Bill Ingalls/NASA hide caption 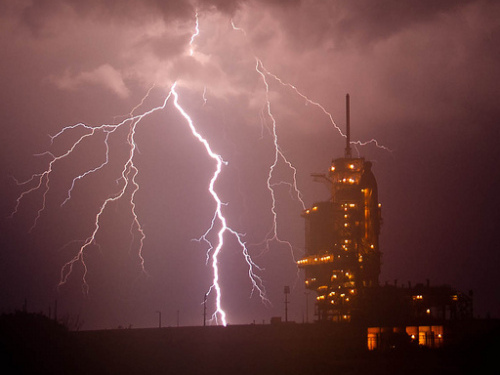 The space shuttle Endeavour is seen on launch pad 39a as a storm passes by prior to the rollback of the Rotating Service Structure (RSS), Thursday, April 28, 2011, at Kennedy Space Center in Cape Canaveral, Fla.