Accessibility links
Who Gets The $27 Million Reward Offered For Bin Laden's Capture? : The Two-Way During a press briefing, Secretary of State Hillary Clinton was circumspect. It seems likely the money may never leave federal hands. 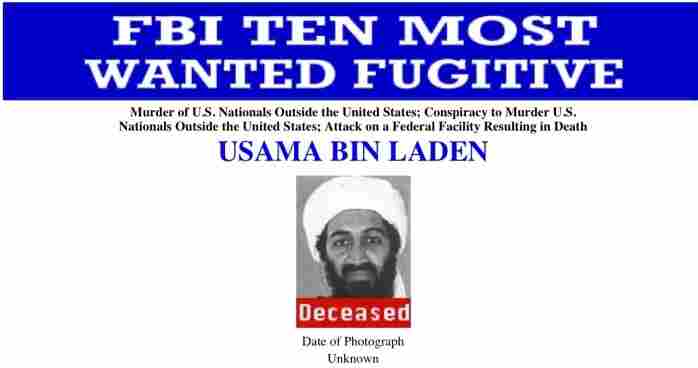 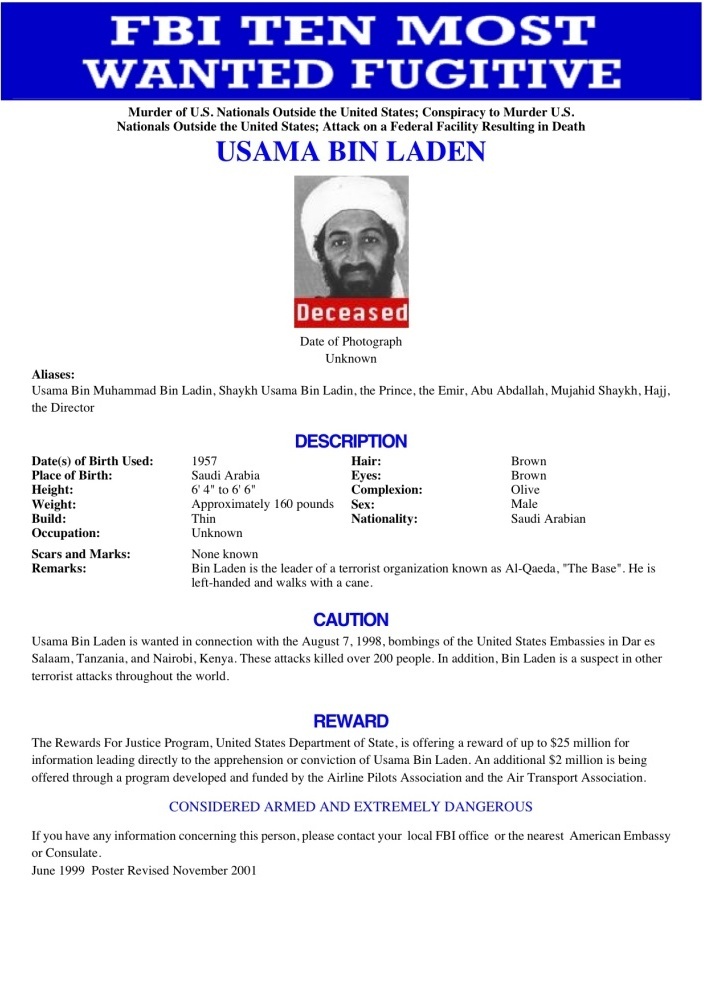 The FBI's Most Wanted poster for Osama bin Laden.

Under a special program started by Congress back in 1984, the U.S. government has paid $100 million to dozens of people who helped bring international terrorists to justice. But the reward for the most notorious terrorist of all — Osama bin Laden — could go unclaimed.

The State Department's Rewards for Justice Program had a $27 million bounty on bin Laden. Oficials removed bin Laden from their list Monday after confirmation of his death at the hands of U.S. troops.

At a news briefing, Secretary of State Hillary Clinton was circumspect about the case.

"Given the importance of confidentiality to the Rewards for Justice program, I cannot comment at all on whether anyone has been nominated for a reward in this or any other case," she told reporters.

The money has paid dividends in other cases, though. The prospect of cash payments motivated an informant to go to the U.S. Embassy in Pakistan and turn in Ramzi Yousef back in 1995. He helped plan the first World Trade Center bombing.

The program also helped the U.S. military find Saddam Hussein's sons. An unidentified source shared their location and after a four-hour firefight, both of them died.

But U.S. authorities have offered some reason to doubt whether the bin Laden reward will ever leave the bank. That's because investigators say they pieced together bin Laden's whereabouts from many different bits of information. Intelligence officials told reporters Monday that no single person is responsible for putting investigators on his trail.

That dynamic produced some friction in the case of Zacharias Moussaoui, who eventually pleaded guilty to terrorism conspiracy charges. A flight instructor and former Navy pilot who taught at the Minnesota school that Moussaoui attended collected $5 million after testifying about his suspicions at his trial.

But two other employees at the same flight school later complained that they had done more – even going so far as to call the FBI to report Moussaui. One of those men later got $100,000 from the Rewards for Justice program.

There's another reason why the bin Laden reward money may not easily leave federal hands. Investigating agencies within the Pentagon, or at the FBI or CIA, have to nominate tipsters. The nominations go to a special government committee and Clinton must approve them.

Intelligence officials say that key tips on the bin Laden courier network came from detainees, some of whom were exposed to enhanced interrogation tactics. Not exactly the people U.S. investigators would choose to get a huge payday.

Clarification at 3 p.m., May 4: "The State Department's Rewards for Justice program had offered a $25 million reward for bin Laden. The Airline Pilots Association and the Air Transport Association contributed $2 million more, for a total of $27 million."