Accessibility links
The Wiretaps That Brought Down A Hedge Fund Titan : The Two-Way Financial giant Raj Rajaratnam, a billionaire investor who founded Galleon Group, was found guilty Wednesday in New York in the largest insider trading case ever involving hedge funds. The case against him was made stronger because of wiretapped conversations in which he brazenly swapped inside stock tips. 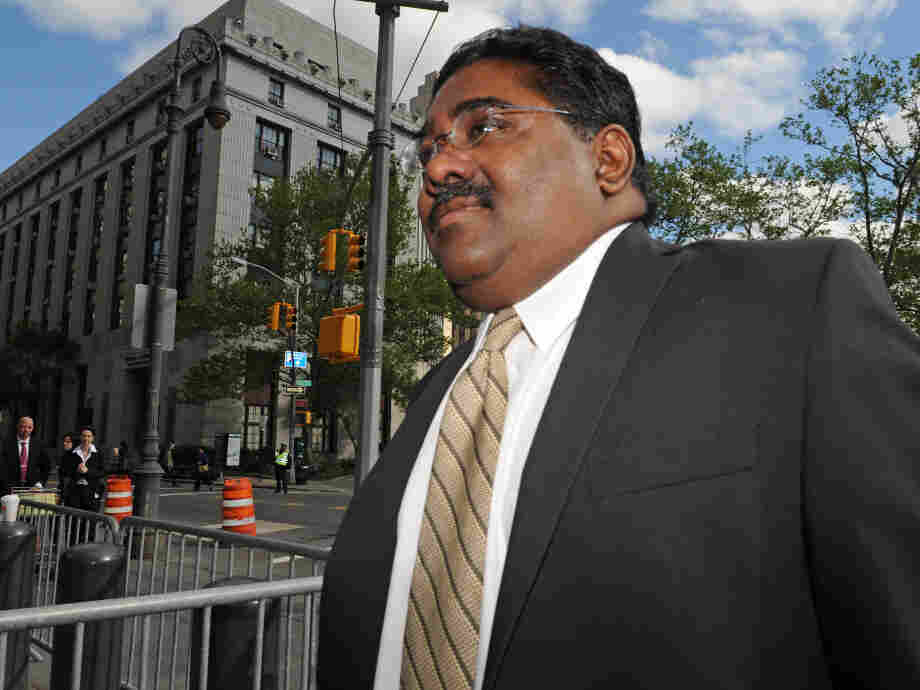 Raj Rajaratnam was found guilty of fraud and conspiracy Wednesday by a federal jury in Manhattan. Rajaratnam is the billionaire investor who founded Galleon Group, one of the biggest hedge funds in the United States. Prosecutors alleged the Sri Lanka-born Rajaratnam was relying on corporate tipsters who were feeding him insider information that led to what looked at the time like savvy and extremely successful investments.

The government pinned the case on a series of wiretapped conversations recorded by federal agents over the course of nine months in 2008. As The New York Times Deal Book puts it, authorities "listened in as Mr. Rajaratnam brazenly — and matter-of-factly — swapped inside stock tips with corporate insiders and fellow traders."

In one of the more telling conversations, Rajaratnam talks about how one investor was going to issue a "term sheet for Spansion," meaning they were proposing business terms to acquire a technology company. Then, with full knowledge that stocks of Spansion would swell, he proposes buying.

"You know, between the term sheet and negotiations all will be a month we can buy, you know?" Rajaratnam is heard saying in one of the wiretaps. "But this is the one that we also have to make sure that we keep our conversations just privileged to the three of us. ... The best way to do these things is to say, you know, 'I sent an email to you saying, you know, have you thought of Spansion? The stock looks cheap.' Right?"

NPR's Tamara Keith dug up a slice of audio from that conversation:

Rajaratnam, 53, was convicted of nine counts of securities fraud and five counts of conspiracy to commit securities fraud. The government estimates he made $63.8 million in illegal profits. The Wall Street Journal reports that Rajaratnam could face as many as 20 years in prison for each count of fraud and five years for each count of conspiracy to commit fraud.

The Journal also explains why another of the wiretapped conversations was important to the case:

The tapes showed how such recordings can seal the government's case. In one call, Mr. Rajaratnam told a contact: "I heard yesterday from somebody who's on the board of Goldman Sachs that they are going to lose $2 per share. The Street has them making $2.50."

The call showed not only that the tip was from a Goldman insider, but also that the information diverged sharply from what investors had expected, making it "material," or likely to have an impact on Goldman's stock price.