Accessibility links
Governments Open Fire In Syria And Yemen During New Round Of Protests : The Two-Way In Syria at least 20 people are dead and snipers in Yemen opened fire on a group of protesters.

0:51
Governments Open Fire In Syria And Yemen During New Round Of Protests 0:51 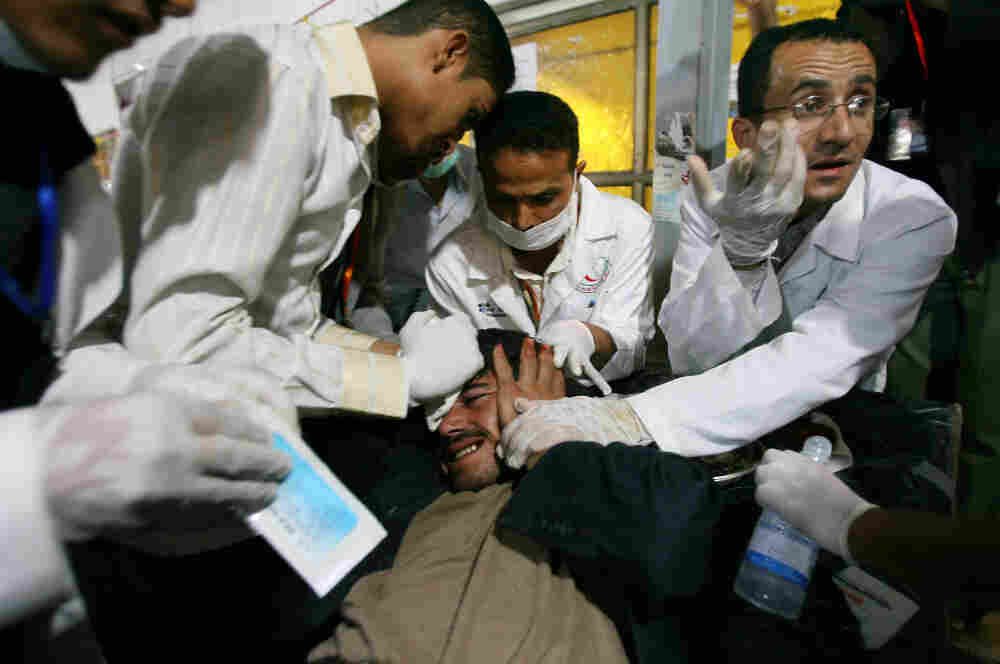 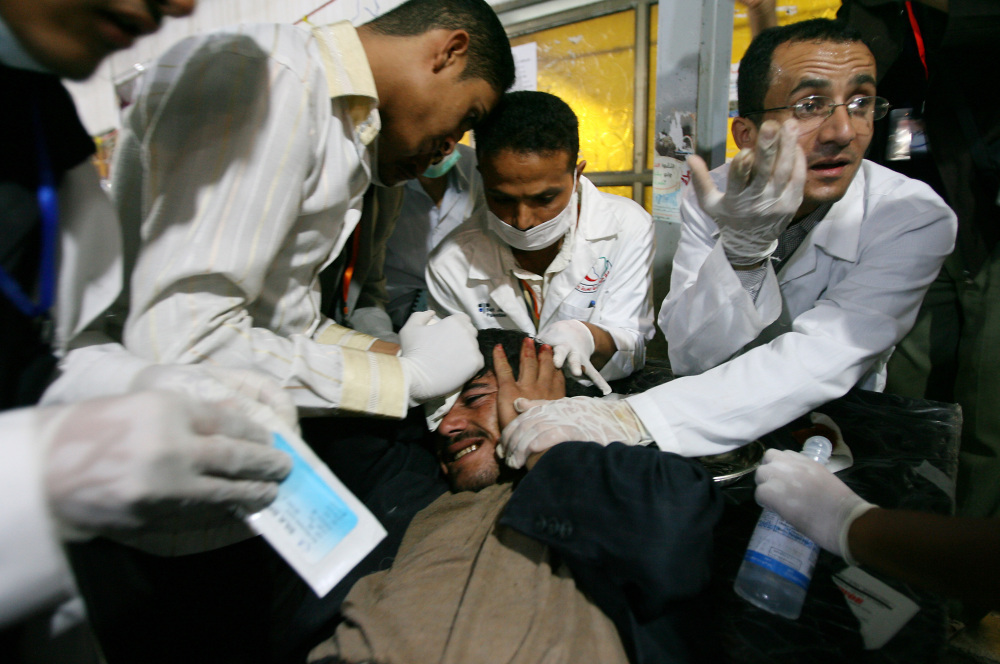 A wounded Yemeni anti-government protester receives treatment at a makeshift field hospital following clashes with Yemeni security forces during a demonstration calling for the ouster of President Ali Abdullah Saleh in Sanaa.

Another day of protests has turned violent in both Syria and Yemen. Korva touched on Syria this morning, but the extent of the government action is coming into focus.

Human rights activists told The Wall Street Journal that at least 20 people are dead after the government shelled Bab Amro near the center of Homs and government tanks attacked a town near Deraa:

The week's stepped-up assaults show that the government of Bashar al-Assad has embraced the violent strategy that other regimes — including Iran, Libya and Bahrain — have employed to clamp down on the pro-democracy movements. That puts the Assad regime —primarily Alawite, one of several large minorities in Sunni-majority Syria — at risk of further isolation from the international community.

One resident of Homs told the BBC that the shelling lasted for three hours. Now, the man said, the town is "surrounded. There is no way for the wounded people to go out to the hospital."

In Yemen, where president Ali Abdullah Saleh has offered to end his more than 30-year rule, authorities opened fired on thousands of protesters. The Guardian's Tom Finn, who is in the capital city of Sanaa, reports that as protesters made their way toward the Ministerial Council headquarters, uniformed men opened fire:

So far two teenagers have been killed and around 60 people — among them women and children — have sustained bullet wounds.

There was some confusion at first as to who the troops actually belonged to: protesters said they were wearing uniforms similar to those of soldiers loyal to the renegade general [Ali Mohsen], who have until now been guarding the protest camp at Change Square.

Among those injured is female activist Bushra Al-Surabi, who is suffering from a bullet wound to the leg.

The march was part of new efforts by Sana'a protesters to put more pressure on President Saleh. Other measures include blocking roads and carrying out acts of civil disobedience.

NPR's Andy Carvin, who's been covering the protests on Twitter, points us to live coverage from SuhailTV, an independent news source from Yemen. Be warned, the images are graphic, but they also show that the number of people hurt is significant. Images from hospitals in Sanaa show dozens of people being treated for bullet wounds. At one point during their live coverage, they showed images of a man with a bloodied eye. Just as doctors put on an oxygen mask, he sat up from his gurney and flashed a victory sign for the camera.

Reuters is now reporting that nine people are dead and "scores" are wounded in Yemen. That number is bound to change, but it is in line with Twitter reports from Jeb Boone, a freelance journalist in Sanaa, who said when authorities opened fire on protesters, "there was so much shooting it just sounded like a steady hum. Never heard anything like it."

Boone also reports that he saw two dead bodies at a field hospital and as he ran, he saw "scores gunned down."

Amel Ahmed describes what happened today in Sanaa as "insane." Jeb Boone at the Washington Post reports that today's clash was the most violent since 52 were killed in March.

Ahmed is an New Yorker, who paused her law degree to head to Yemen to cover the unrest on a blog called Awakening. She says the protesters today were headed to the Ministerial Council headquarters when suddenly government forces opened fire.

For hours afterwards, protesters tried to advance, but as soon as they got past a certain point, government forces would open fire. There were so many bullets, Ahmed told us in a phone interview from her office in Sanaa, that she could not tell where they were coming from.

At one point, she and another freelance journalist, had to seek refuge in a barbershop. They saw one man shot in the head. Here's how she describes the scene:

Ahmed said Yemenis on the street are frustrated at the Gulf Cooperation Council for not putting an end to Saleh's more than three-decade rule and she said she's heard frustration with the Obama administration for not stepping in to help.

She said that into the night, protesters were injured and killed by bullets, but they are determined. The short term goal is to stage a sit-in in front of the presidential palace. She said she doesn't believe the protests will stop, until Saleh leaves office: