Accessibility links
'Go The [Expletive] To Sleep': A Salvo For Tired Parents : The Two-Way The author of the profane new storybook says the book addresses the anxiety of being seen as a bad parent.

'Go The [Expletive] To Sleep': A Salvo For Tired Parents

'Go The [Expletive] To Sleep': A Salvo For Tired Parents 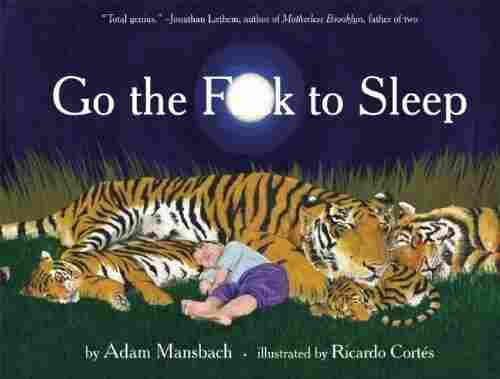 The cover of Go the [expletive] to Sleep. Akashic Books hide caption

We've all been there: It's 10 at night, you've read Good Night Moon six times, and rocked your dear child for two hours. And, still, when you dare to look down at their angelic face, their eyes are still open.

It was a moment like that — "when you begin to contemplate the idea that you will never again leave this room" — that gave Adam Mansbach the idea for a storybook that, as Mark reported earlier, has become the talk of the town.

Mansbach said on a particularly bad night, he left his daughter's room and tapped out a Facebook status update: "Look out for my forthcoming children's book, Go the [famous four-letter expletive] to Sleep."

The response was so great that Mansbach got to work and before long he had an exquisitely profane bedtime story that has really struck a nerve. The book isn't due until June but pirated digital copies of it have created such buzz that Mansbach's book beat out the likes of Tina Fey, Charlaine Harris and Erik Larsen on Amazon's best seller list for two weeks in a row.

"I think it's something every parents goes through and few are comfortable talking about," Mansbach told us in a telephone interview. "I think there's a lot of anxiety about being seen as a bad parent. There's still a lot of subjects that I think people aren't entirely comfortable being honest about."

And that's the thing about Go the [#$%@] to Sleep: It really challenges the notions of modern parenting. In some ways, it comes out of left field in a world where some parents fret about getting their children into the right pre-school or in a world where kids' ballet, piano and baseball practice rule the lives of the adults.

"Something has to give with all the emphasis on perfect parenting," said Mansbach. "I think those conversations start to sag under their own weight and you do need some kind of alternative narrative that's a little more honest or at least a little more funny."

The book is just that: It combines the sweetness and fantasy of classic children's books with the unspeakable profanity of a tired parent. Here is Mansbach reading one of the book's verses:

The owls fly forth from the treetops.

Through the air, they soar and they sweep.

For real, shut the [expletive] up and sleep.

The cubs and the lions are snoring,

Wrapped in a big snuggly heap.

You're cute as hell and smart as [expletive]

But why in the [expletive] won't you sleep?

And here he is explaining that dichotomy:

"I tried to articulate the precise way I felt in my daughter's room," he said. "But also do it in a way that was affectionate, where the profanity was balanced against affection and love and where it was clear that the narrative going on in the parent's head is not something that is spoken to the child."

Mansbach said his daughter, who's three-years-old, has actually become a pretty good sleeper. He said he hasn't read the book to her, but she enjoys the pictures. And someday, when she's grown up, he said, he hopes that he's raised her with a good enough sense of humor that she'll "appreciate her childish exploits."

Of course, the book has received criticism, especially from parents who say they love their children so much, they enjoy every second with them — even when they're struggling to go to sleep.

To that Mansbach responds with typical flair: "They're full of [expletive]," he said.