Accessibility links
Support For Gay Marriage Tops 50 Percent For First Time In Gallup's Polling : The Two-Way The polling organization has been asking about the issue since 1996. While support has now edged above 50 percent, Gallup says the issue remains highly divisive — with older Americans and Republicans more likely to be opposed.

A slight majority (53 percent) of Americans now "believe same-sex marriage should be recognized by the law as valid," Gallup reports this morning. 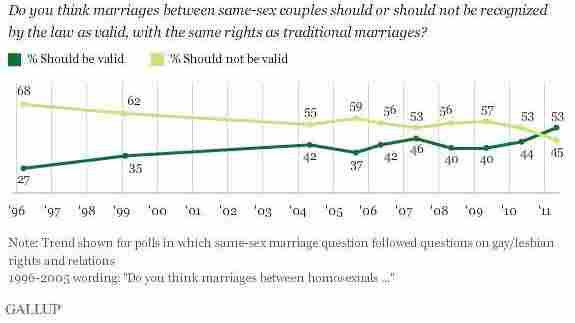 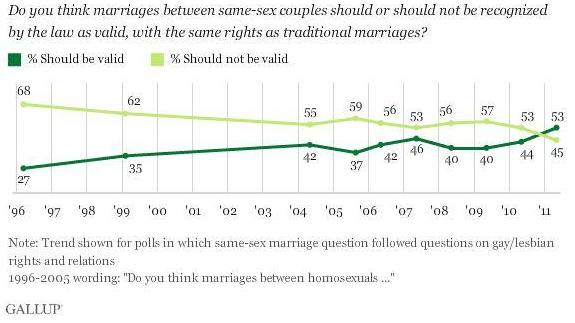 It's the first time since it began asking about gay marriage in 1996, the polling organization says, that more than half of those polled have felt that way.

The result matches what was reported in a March poll done for ABC News and The Washington Post.

According to Gallup, there was a 9-point increase in support for same-sex marriage in its polling since last year. It adds, though, that the issue remains "highly divisive":

"While big majorities of Democrats and young people support the idea of legalizing same-sex marriage, fewer than 4 in 10 Republicans and older Americans agree. Republicans in particular seem fixed in their opinions; there was no change at all in their support level this year, while independents' and Democrats' support jumped by double-digit margins."

Gallup's nationwide telephone survey was done from May 5-8. The firm surveyed 1,018 adults, with about 400 of them contacted on cellphones and the rest on landlines. The margin of error: +/- 4 percentage points.