Accessibility links
VIDEO: Horrifying Scramble To Safety As Tornado Crushed Joplin Store : The Two-Way Words such as "war zone," "atomic bomb" and "devastation" are being used this morning about the effects of a tornado that roared through Joplin, Mo., Sunday evening. And eyewitness videos document the destruction. 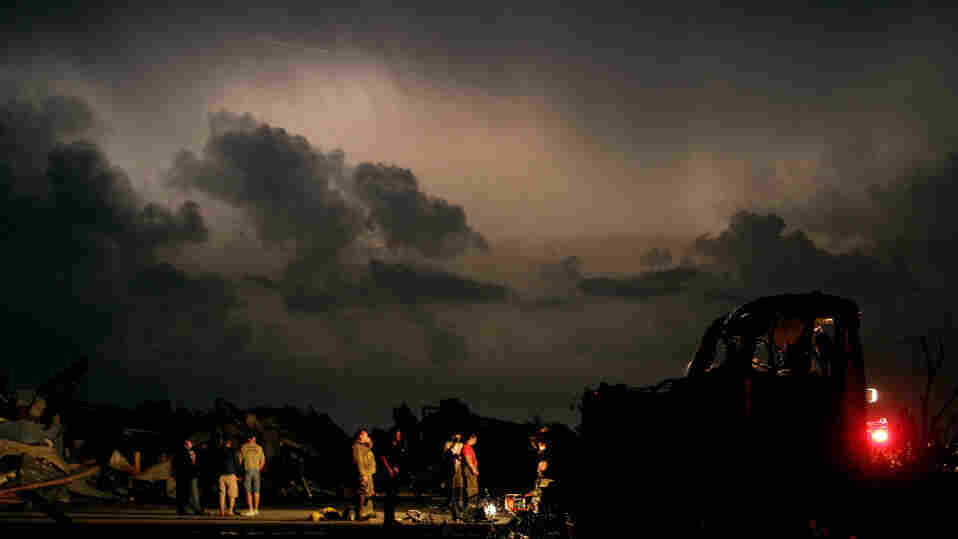 Emergency workers wait for a medical team after finding a body in a tornado-ravaged car in Joplin, Mo., earlier today (May 23, 2011). Charlie Riedel/AP hide caption 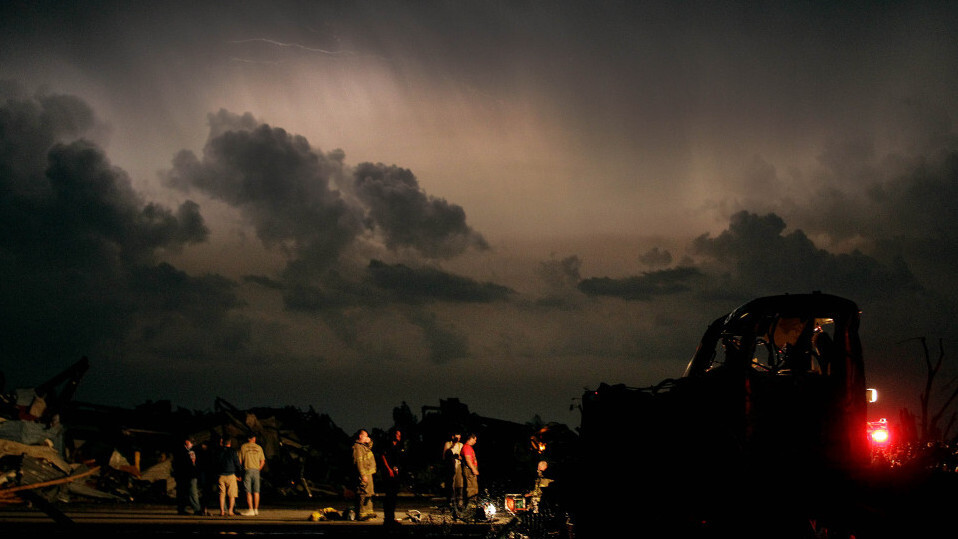 Emergency workers wait for a medical team after finding a body in a tornado-ravaged car in Joplin, Mo., earlier today (May 23, 2011).

We're hearing and reading words such as "war zone," "atomic bomb" and "devastation" this morning about the effects of a tornado that roared through Joplin, Mo., Sunday night.

The death toll, already a grim 89, is expected to exceed 100, the local Joplin Globe reports.

As you can see and hear from this video, which the YouTube poster says was taken at a Fastrip convenience store on E. 20th St. in Joplin as the tornado hit, it was horrifying. The people in the store found shelter in the walk-in refrigerator. (Fair warning, this video may be disturbing to some.)

According to the local Globe:

"St. John's Regional Medical Center [in Joplin] took a direct hit from the tornado. Several patients in that hospital were transferred to Freeman Hospital West, which was overwhelmed by injured people. People were being delivered in pickup trucks, lying on doors and pieces of plywood that served as makeshift stretchers. Also overwhelmed was an emergency medical center that was set up at Memorial Hall. ...

On Morning Edition, city council member Melodee Colbert-Kean told host Renee Montagne that 70 percent of Joplin has been affected." She thinks people had 5 to 7 minutes' warning before the tornado struck.

The city needs all the help it can get from surrounding communities, she added: "water, food, shelter, a hug, a prayer... anything that can be done is needed... and appreciated."

Local NBCActionNews has more video of the aftermath.