Accessibility links
Making The Best Out Of Invasion, Missouri Shop Makes Cicada Ice Cream : The Two-Way The first batch of ice cream sold out in a flash. But, then, health officials advised against using the insects in food. 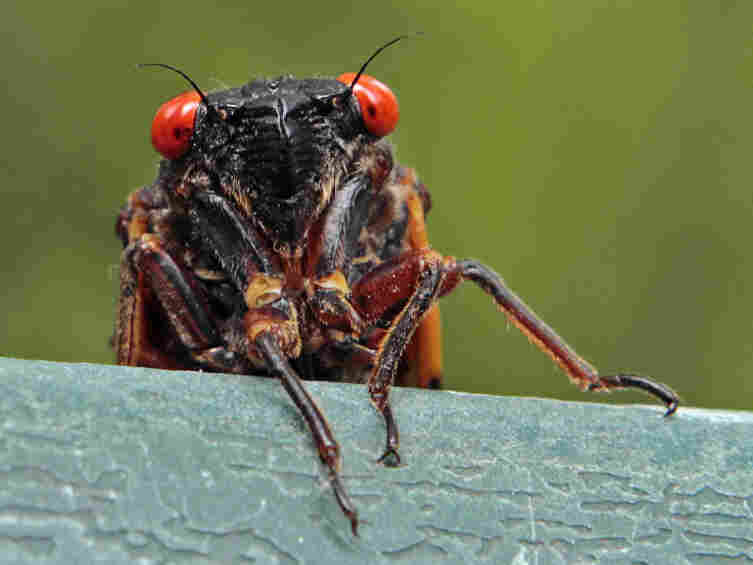 What is it that they say? If life gives you a cicada invasion, make ice cream. OK that's not what anyone says, but Columbia, Mo. is in the midst of cicada mating season. It means that once every 13 years, cicadas leave their homes underground as nymphs, they molt and emerge as adults. Sparky's Homemade Ice Cream decided that while they were out there, they might as well make a cicada flavored batch.

Here's how the Columbia Missourian describes the process:

To make the ice cream, Sparky's employees collected cicadas from their backyards and brought them in to work on Wednesday. The cicadas are fully cooked through boiling, then covered in brown sugar and milk chocolate. The base ice cream is a brown sugar and butter flavor.

The first batch of ice cream sold out before it was "placed in the display case."

Alas, before the second batch was made, Sparky called the Columbia/Boone County Department of Public Health and Human Services and they told them the food code didn't address cicadas, but advised against their use in food.

Last month, the USA Today reported on the emergence of the Great Southern Brood or Brood XIX. Over the past month, the cicadas have been hatching across the United States. They'll stick around for a month, die and the process begins all over again. Quoting a biology professor, the paper reports cicadas are "non-toxic and even edible."

Still, the Missourian reports Sparky's owners hung a sign on the door, telling customers the next batch won't be made until 2024.