Accessibility links
'Texas Bodies' Nonstory Is Reminder To News Media: Slow Down : The Two-Way In only took an hour for news outlets to go from frantic alerts about "25 to 30 bodies" in a backyard near Houston to the real story — that there were no bodies. But the erroneous reports are fresh examples of the need to be more careful.

'Texas Bodies' Nonstory Is Reminder To News Media: Slow Down

'Texas Bodies' Nonstory Is Reminder To News Media: Slow Down 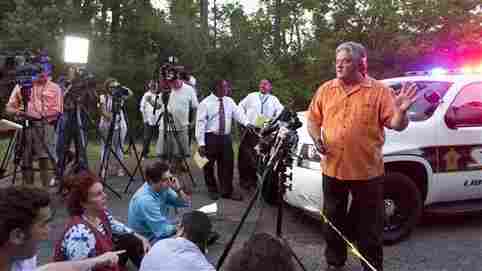 We've made the same mistake — reporting something we've been told by someone who should know when we really should have waited for more information to come in.

So we won't get all sanctimonious.

But what happened Tuesday when stories started to come out of Liberty County, Texas, about "dozens" of bodies supposedly being found at a home is worth noting. It underscores again how we in the news media need to remind ourselves sometimes to slow down and let the facts become more clear before we rush to report. And at the very least, to be very careful about what we do say when a story is breaking.

If you haven't heard, there were news alerts and Twitter posts from local and national news outlets late Tuesday afternoon that 20 to 30 bodies had been discovered on property near Hardin, Texas.

Click2Houston1, the Twitter feed from Houston's KPRC-TV flat out said there was "Breaking News in Liberty County where dozens of bodies have been found near Daisetta." It had said it was told by the Liberty County Sheriff's Office that "25 to 30 bodies were reported on a property at the intersection of County Roads 2049 and 2048."

Reuters, saying it was relying on "local media" reports, had reported that "Texas authorities find up to 30 bodies, including children."

Within an hour, the story changed dramatically.

As The Associated Press writes this morning, "the investigation into a tip about multiple bodies being buried at a rural Texas farmhouse has now turned to the tipster after authorities turned up nothing in a search of the property." It seems that "authorities said the tip came from a woman claiming to be a psychic" and they took it seriously because of details she told them regarding the home and property. But they found nothing.

So what does this all tell us? That even in this age of intense competition and instant reporting, it's important for news outlets to remember that they should stick to what they know, not what they think on stories like this. And that some seemingly old-fashioned kinds of things — such as attributing information, waiting to hear from multiple sources and being very, very careful about how we phrase our reports — are still important.

With that, we will get off our soap box. Feel free to call us out in the future if we don't follow our own advice.

Update at 12 p.m. ET: Now that the NPR.org editors who were on duty last evening are at their desks again, we've confirmed how the story was handled on this website.

Late Tuesday afternoon, NPR.org posted a short story from The Associated Press that basically said authorities were investigating a report about bodies at that location. Neither AP nor NPR.org said any bodies had been found. (Note at 3:45 p.m. ET: The AP had even cautioned news organizations that get its feeds, saying at 6:58 p.m. ET Tuesday that it was "aware of reports that dozens of bodies have been found at a home near Hardin, Texas. [But] the AP has not been able to confirm the source of the reports and whether they are true. AP reporters and a photographer are en route to the scene.")

Immediately after more information came in, that wire story on NPR.org was updated with the news that no bodies had been discovered and the tale of how authorities had been led to the location by a tip from a psychic.

Our colleagues on the radio did not report about what was going on at all.

The Two-Way did not report about any of this until this post today.