Accessibility links
Brilliant News: Light Bulb That's Been Burning Since 1901 Is Still On : The Two-Way The Centennial Bulb in Livermore, Calif., marks its 110th year in operation (everyone assumes) on June 18. Check the webcam if you're worried about it going out.

We trust no one is going to hit the switch between now and next Saturday (June 18) at Fire Station 6 in Livermore, Calif.

Not with the city's Centennial Bulb set to mark its 110th year in (almost) continuous use that day. 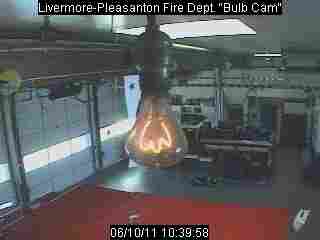 The Centennial Bulb. Click the link to be taken to the "BulbCam." CentennialBulb.org hide caption

As you may have heard on The Colbert Report this week or remember from Weekend All Things Considered back in 2001, there's a light bulb in that firehouse that was first switched on in 1901. Since then, with the exception of a brief period in 1903, a week or so in 1937 and some power outages between then and 1976, the light has been on.

For the past 35 years or so it has been connected to an emergency generator system in the firehouse, retired fire division chief Lynn Owens told NPR's Jacki Lyden back in 2001. That's the system that keeps the department's emergency radios running at all times. "So, no, we're not worried about a blackout," he said.

The light's longevity, Owens added, can partly be attributed to a very thick filament and the relatively lower power level supplying it.

As for what's coming next Saturday, the city plans "an afternoon of food & fun, and a walk down memories lane. Several displays are being planned, about the Bulb, Fire Department, and Liverrmore history." And there's a movie premiere: Century of Light, "a film starring one of Livermore's most famous luminaries: the Centennial Bulb," according to the Independent, the local newspaper.

Meanwhile, if you're worried about the light, and have some time on your hands, there is a "BulbCam."