There's word on a "Jihadist website" that Osama bin Laden's longtime deputy, Egyptian Ayman al-Zawahri, is taking over the leadership of al-Qaida. 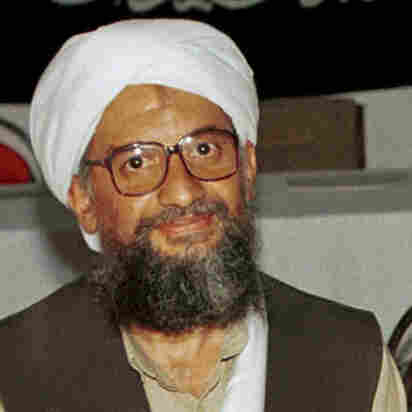 This is the first semi-official confirmation of what had been expected to happen after the May 2 death of bin Laden during a raid by U.S. commandos on his hideout in Pakistan.

As the BBC notes, al-Zawahri (a doctor by training) is "known to be highly intelligent, but is said to lack the charisma of bin Laden." It has posted some of the statements al-Zawahri has made in recent years, including his calls for the killing of Americans.

Other stories making headlines include:

-- White House Stands By U.S. Military Mission In Libya: While arguing that the campaign in Libya does not need congressional approval, the White House said Wednesday that it has "complied with the letter and spirit" of the War Powers Resolution by sending a 32-page report to Congress explaining the mission. (Morning Edition)

From a related story by The Washington Post: "The Obama administration argued Wednesday that its nearly three-month-old military involvement in Libya does not require congressional approval because of the supporting role most U.S. forces are playing there, a position that puts it at odds with some Republican leaders and the antiwar wing of its own party."

-- Citigroup Doubles Number Of Accounts Thought To Have Been Hacked: "Citigroup Inc. said about 360,000 credit cards were affected by last month's hacking attack, or nearly double the number previously indicated by the giant bank." (The Wall Street Journal)

-- Greece To Announce New Cabinet: "Greek Prime Minister George Papandreou is set to announce a new cabinet in a concessionary move as he seeks support for new austerity measures. Mr Papandreou, who will stay in his post, says he will put the cabinet to a vote of confidence in the parliament. ... Athens witnessed some of the most violent protests in more than a year on Wednesday as demonstrators went on to the streets and took part in a general strike." (BBC News)

-- Tougher Conditions Today As Crews Battle Arizona Fire: "Crews are expecting higher winds Thursday as they battle a raging blaze that started last month in eastern Arizona, devouring hundreds of thousands of acres before spilling into New Mexico. The massive blaze has grown into the largest fire ever in Arizona, according to fire officials. It had burned 478,452 acres and was 29% contained by Wednesday evening, officials said." (CNN)

Our related post: "Win Or Lose, Some Fans Choose To Riot."