Accessibility links
Obama: Troop Pullout From Afghanistan To Begin : The Two-Way Saying that the "tide of war is receding," the president laid out plans to bring the 33,000 "surge" troops home by the summer of 2012. "It is time to focus on nation building here at home," he said.

Obama: 'The Tide Of War Is Receding'; Troop Withdrawals To Begin

Obama: 'The Tide Of War Is Receding'; Troop Withdrawals To Begin

Saying that the U.S. has largely accomplished its mission in Afghanistan and that "it is time to focus on nation building here at home," President Obama tonight laid out a plan to bring 33,000 of the 100,000 U.S. military personnel in that country home by the end of next year.

He said 10,000 troops will be withdrawn from the central Asian nation this year. 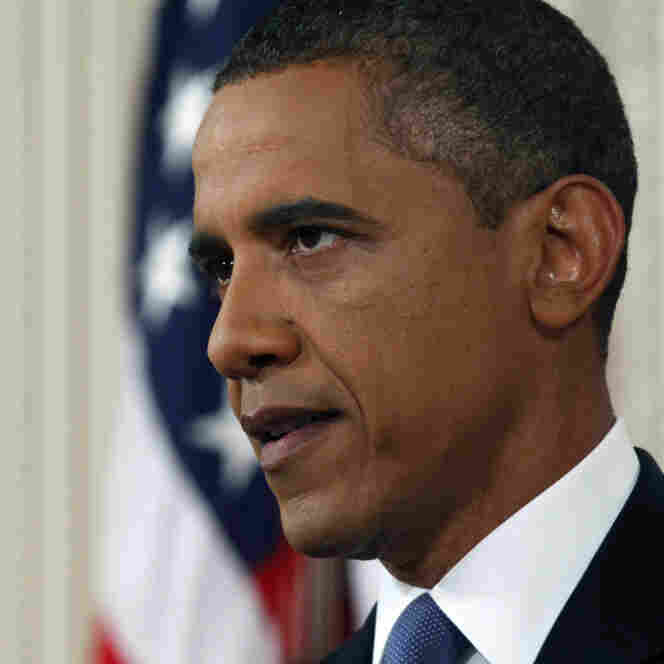 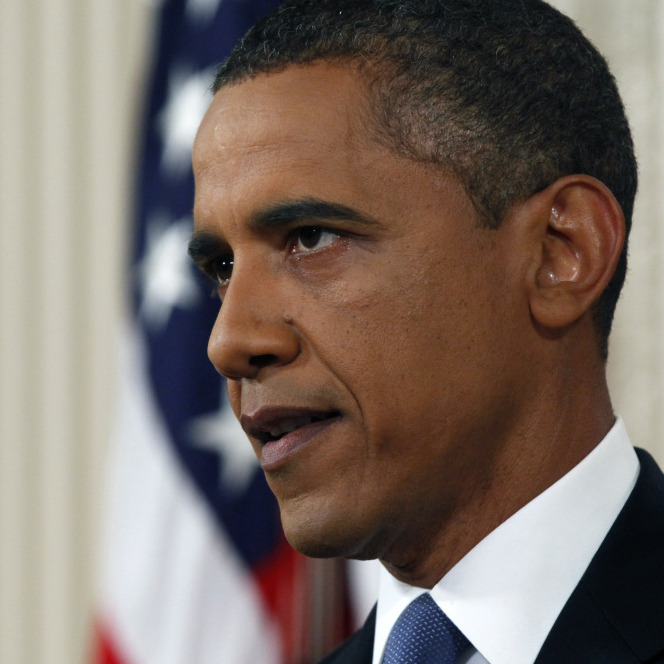 President Obama as he addressed the nation tonight (June 22, 2011).

And, the president said in an address to the nation, that all U.S. combat forces will leave Afghanistan by the end of 2014.

By that time, U.S. forces will have been there for 13 years — since shortly after the Sept. 11, 2001, terrorist attacks that were planned and organized by Osama bin Laden's al-Qaida terrorist network from what had been its safe haven in Afghanistan.

The president tonight recognized the sacrifices that American troops and their families have made since that dark day nearly 10 years ago.

"We have learned anew the profound cost of war," he said, "a cost that has been paid by the nearly 4,500 Americans who have given their lives in Iraq, and the over 1,500 who have done so in Afghanistan – men and women who will not live to enjoy the freedom that they defended. Thousands more have been wounded."

But while cautioning that hard times may still be ahead, he also held out hope: "We have ended our combat mission in Iraq, with 100,000 American troops already out of that country," Obama said. "And even as there will be dark days ahead in Afghanistan, the light of a secure peace can be seen in the distance. These long wars will come to a responsible end."

Frank James, over at It's All Politics, will be looking at the address from a political perspective later. We live-blogged as the president spoke. Read through to see the highlights. We'll be back in the morning with a round-up of the reaction and analysis.

As he wraps up, the president says it is time to "finish the work at hand. Let us responsibly end these wars, and reclaim the American Dream that is at the center of our story. With confidence in our cause; with faith in our fellow citizens; and with hope in our hearts, let us go about the work of extending the promise of America – for this generation, and the next."

Turning to the homefront, the president strikes a theme that's sure to be part of the 2012 campaign — and has been championed by some of his would-be Republican opponents.

"Now, we must invest in America's greatest resource – our people," he says. "We must unleash innovation that creates new jobs and industry, while living within our means. We must rebuild our infrastructure and find new and clean sources of energy. And most of all, after a decade of passionate debate, we must recapture the common purpose that we shared at the beginning of this time of war. For our nation draws strength from our differences, and when our union is strong no hill is too steep and no horizon is beyond our reach.

"America, it is time to focus on nation building here at home."

Update at 8:11 p.m. ET. Lessons Learned And The Mission In Libya:

The president says that one of the lessons of the last decade is that the U.S. must chart a "centered-course."

"We must rally international action, which we are doing in Libya," he notes, "where we do not have a single soldier on the ground, but are supporting allies in protecting the Libyan people and giving them the chance to determine their destiny."

After noting the sacrifices made by those who have died and been injured in the wars in Iraq and Afghanistan, the president says that "yet tonight, we take comfort in knowing that the tide of war is receding. Fewer of our sons and daughters are serving in harm's way. We have ended our combat mission in Iraq, with 100,000 American troops already out of that country. And even as there will be dark days ahead in Afghanistan, the light of a secure peace can be seen in the distance. These long wars will come to a responsible end."

"Of course, our efforts must also address terrorist safe-havens in Pakistan," Obama continues. "No country is more endangered by the presence of violent extremists, which is why we will continue to press Pakistan to expand its participation in securing a more peaceful future for this war-torn region. We will work with the Pakistani government to root out the cancer of violent extremism, and we will insist that it keep its commitments. For there should be no doubt that so long as I am president, the United States will never tolerate a safe-haven for those who aim to kill us: they cannot elude us, nor escape the justice they deserve."

"America will join initiatives that reconcile the Afghan people, including the Taliban," Obama says. "Our position on these talks is clear: they must be led by the Afghan government, and those who want to be a part of a peaceful Afghanistan must break from al-Qaida, abandon violence, and abide by the Afghan Constitution."

After saying great progress has been made in Afghanistan, the president cautions that "of course, huge challenges remain. This is the beginning – but not the end – of our effort to wind down this war. We will have to do the hard work of keeping the gains that we have made, while we drawdown our forces and transition responsibility for security to the Afghan government. And next May, in Chicago, we will host a summit with our NATO allies and partners to shape the next phase of this transition."

"Thanks to our men and women in uniform, our civilian personnel, and our many coalition partners, we are meeting our goals" in Afghanistan, the president says. "As a result, starting next month, we will be able to remove 10,000 of our troops from Afghanistan by the end of this year, and we will bring home a total of 33,000 troops by next summer, fully recovering the surge I announced at West Point. After this initial reduction, our troops will continue coming home at a steady pace as Afghan security forces move into the lead. Our mission will change from combat to support. By 2014, this process of transition will be complete, and the Afghan people will be responsible for their own security."

"In the days that followed [the 9/11 attacks], our nation was united as we struck at al-Qaida and routed the Taliban in Afghanistan," Obama says. "Then, our focus shifted. A second war was launched in Iraq, and we spent enormous blood and treasure to support a new government there. By the time I took office, the war in Afghanistan had entered its seventh year. But al-Qaida's leaders had escaped into Pakistan and were plotting new attacks, while the Taliban had regrouped and gone on the offensive."

"Nearly 10 years ago," the president says, "America suffered the worst attack on our shores since Pearl Harbor. This mass murder was planned by Osama bin Laden and his al-Qaida network in Afghanistan, and signaled a new threat to our security — one in which the targets were no longer soldiers on a battlefield, but innocent men, women and children going about their daily lives."

President Obama is telling the nation tonight how fast and how soon the U.S. will start drawing down the number of troops it has in Afghanistan. He's going to talk specifically about the 33,000 or so military personnel who were added to the campaign there in the "surge" he announced in December 2009, and in broader terms about the length and size of the U.S. mission.

There are now about 100,000 U.S. troops in Afghanistan. As NPR's Ari Shapiro reported for the Newscast Desk earlier, the president's long-term goal is to have all "combat" troops out of Afghanistan by sometime in 2014.

The president is scheduled to begin at 8 p.m. ET. We will live-blog as he speaks. Be sure to hit your refresh button to see our latest updates. Afterward, we'll recap the news. If you're on the right kind of device (our apologies to those who aren't) you can also listen by clicking the player at top of this post (8:18 p.m. ET: with the address now over, we've removed that audio player). And, as usual, among the places you can watch online are WhiteHouse.gov and C-SPAN.org.