Accessibility links
NATO Says It Has Killed Senior Militant Linked To Hotel Attack : The Two-Way The airstrike that killed him came on the same day the Obama administration unveiled its new "National Strategy for Counterterrorism," which focuses on targeted drone strikes and special operations raids rather than conventional wars. 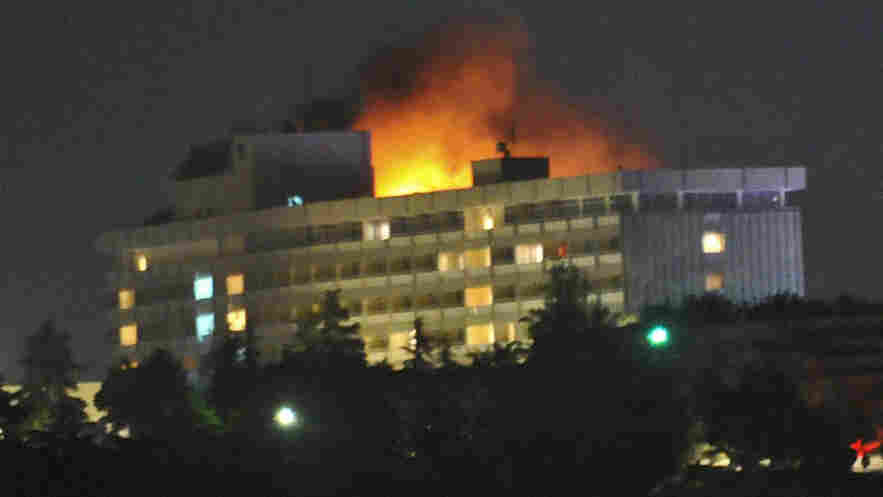 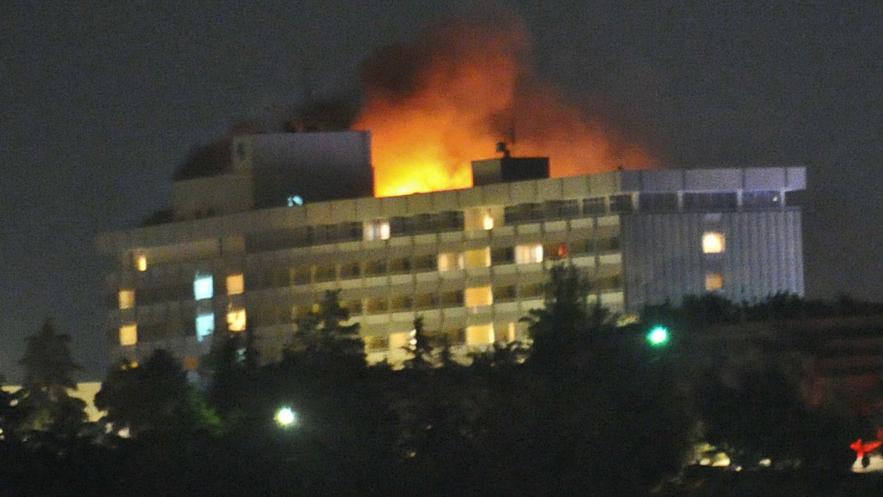 Fire broke out in Kabul's Inter-Continental Hotel on Tuesday during the attack.

"NATO forces in Afghanistan say they have killed a senior militant they suspect of involvement in [Tuesday's] attack on the Inter-Continental Hotel in Kabul," the BBC reports. "Ismail Jan died in an airstrike in the eastern province of Paktia on Wednesday, the alliance said."

In a statement, the International Security Assistance Force that directs allied forces says that Jan, "a top Haqqani network leader suspected of providing material support to the Kabul suicide bomb attack ... was the deputy to the senior Haqqani commander inside Afghanistan, Haji Mali Khan."

While the Taliban claimed responsibility for the hotel attack, which left about 20 people dead (including the eight attackers), NATO has pinned the blame on the Haqqani network. The Taliban and the Haqqani network, which in recent years has staged several high-profile attacks and kidnappings, do often work in support of each other.

The strike that killed Jan came on the same day that White House counterterrorism chief John Brennan unveiled "a new national counterterrorism strategy," as The Associated Press reports. Under that doctrine, AP says, the U.S. "will push ahead with more targeted drone strikes and special operations raids and fewer costly land battles like Iraq and Afghanistan in the continuing war against al-Qaida" and other terrorist networks.

NPR's Rachel Martin reports that Brennan also said the U.S. will use "every tool in our government to pursue al-Qaida and its affiliates."