Accessibility links
About $22 Billion In Gold, Diamonds, Jewels Found In Indian Temple : The Two-Way The valuables were donated by an erstwhile royal family and devotees visiting the temple. The treasure has been kept under lock and key for some 150 years. Now, Indians are having a discussion about where that wealth should go, whether it should stay in the temple or used to fight poverty.

About $22 Billion In Gold, Diamonds, Jewels Found In Indian Temple

About $22 Billion In Gold, Diamonds, Jewels Found In Indian Temple 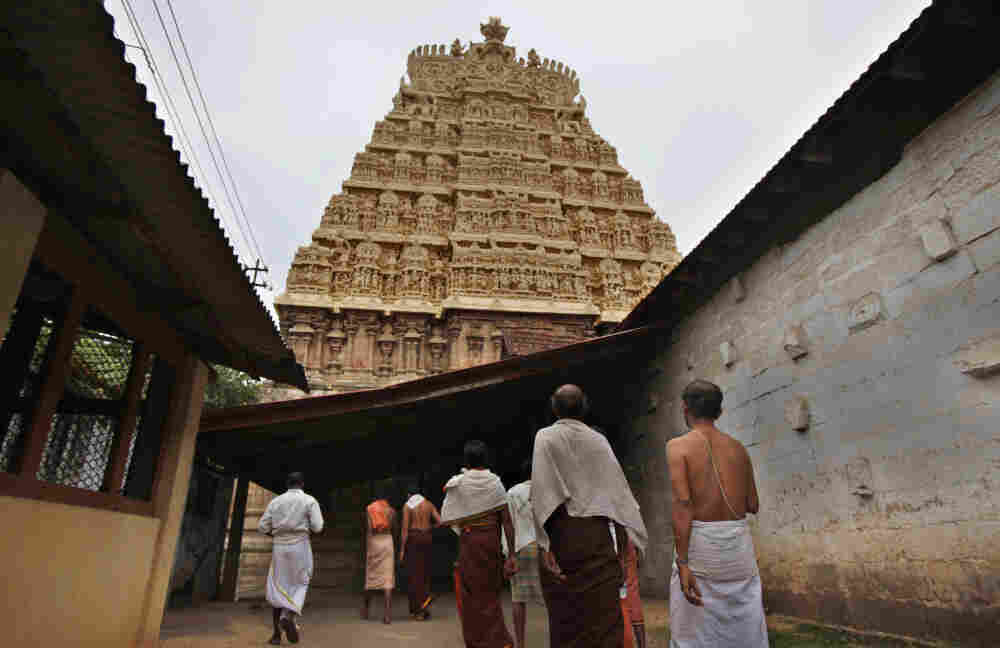 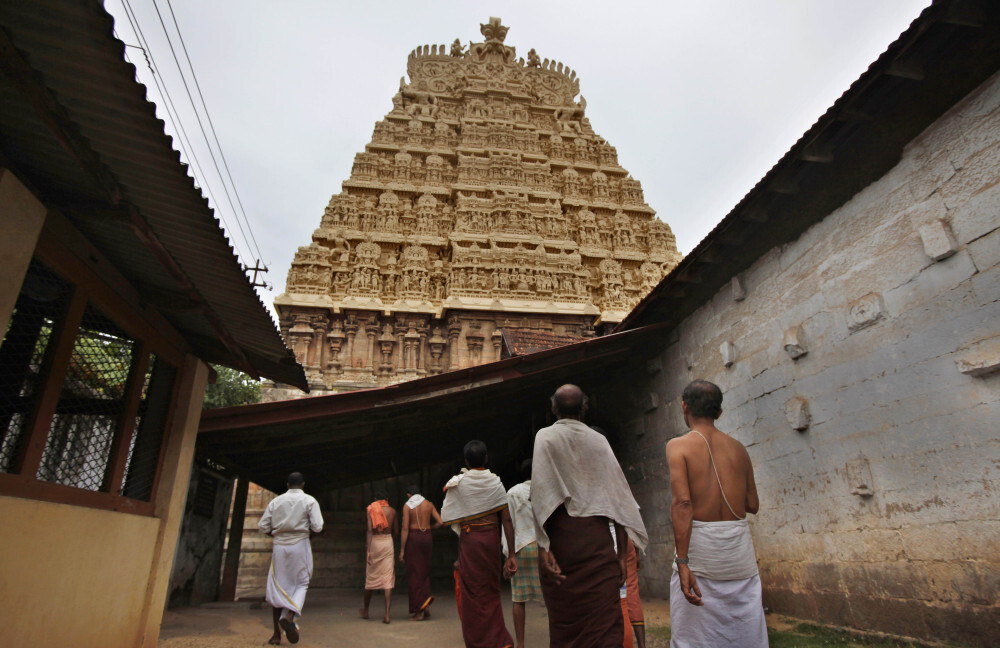 Devotees walk inside the premises of the 16th-century Sree Padmanabhaswamy Temple in Trivandrum, India.

In Southern India a story that sounds like the plot line of a Hollywood adventure is unfolding. Over the past week, on orders from the country's Supreme Court, a panel has found a treasure estimated to be worth $22 billion in the underground vaults of a Hindu temple in Trivandrum, India.

Inside the Sree Padmanabhaswamy Temple, investigators were counting the staggering hoard of gold coins and statues of gods and goddesses studded with diamonds and other precious stones. Outside, small groups of armed policemen patrolled the temple grounds in the heart of the Kerala state capital, Trivandrum.

Metal detectors were hurriedly installed at temple entrances after six days of searches revealed a treasure trove of artifacts, statues and temple ornaments made of gold and embellished with jewels.

The valuables were donated to the temple by devotees over hundreds of years, and India's erstwhile royal family has been the custodian of the treasures.

The vaults had not been opened in about 150 years and the treasure spans some 500 years. India's Supreme Court ordered that the vaults of the temple be inventoried after a man filed a suit that worried about how the trust was caring for the riches.

In some ways, that's where the story gets interesting. With the find, India is in the middle of a heated discussion about what rights to afford former royalty and what should happen to riches like these that include historic pieces destined for museums. The Christian Science Monitor offers a condensed family history:

The temple is controlled by descendants of the royal family of Travancore, the former princely state of the region. It is believed the former rulers donated much of their wealth to the temple, where it lay in safe keeping for decades. Offerings by the many worshippers making pit stops there along the global trade routes probably also contributed to the treasure.

It was no stumbled-upon find, however. While the vaults have been kept under lock and key for around 150 years, the wealth has been on the public record.

Still, $22 billion (yes, billion with a "B") is a lot of money. We wondered why it wasn't put to use. The Hindu newspaper reports that the royal family ruled Travancore as "padmanabha dasasas," which means they were servants of the temple's deity. The BBC explains a bit better in between some legal history:

The Supreme Court stayed a ruling by the high court in Kerala, which ordered the state government to take over the temple and its assets from the royal trust. It also ordered the trust to hand over responsibility for the temple's security to the police.

The members of the Travancore royal family entrusted their wealth to the temple because they consider themselves to be servants of its presiding deity. The deity, Padmanabhaswamy, is considered by devotees to be an aspect of the Hindu God Vishnu in eternal sleep.

But there was a public outcry when the Maharajah attempted to retain control of the temple by citing a special law, with many arguing that the wealth belonged to the people now.

The panel appointed by the Supreme Court has opened five of the six vaults. The panel managed to open the sixth vault but found an iron wall inside it, reports the BBC. As if the story couldn't get any weirder, The Hindustan Times reports the sixth vault has a snake on the front door and quoting an unnamed royal family source, it reports that opening it "might be a bad omen."

The Guardian reports that the sixth vault has "special locks" but experts should be able to examine them and open it by Friday. The Guardian also reports that the inventory is being conducted under the watch of police, but no pictures or video of the vaults will be taken or released because it "is strictly prohibited" within a "sacred space."

As we said, $22 billion is an almost unimaginable number. But that is likely a conservative estimate. The Hindu reports that the panel is simple counting and weighing the valuables. "Their value, including antique value, is not being assessed," The Hindu reports.