Accessibility links
Murdoch Folds Tabloid Over Hacking Scandal : The Two-Way The British tabloid has been under increasing attack because of the scandal over how investigators it hired hacked the phones of murder victims, celebrities, politicians and relatives of those killed and injured in the London bombings. 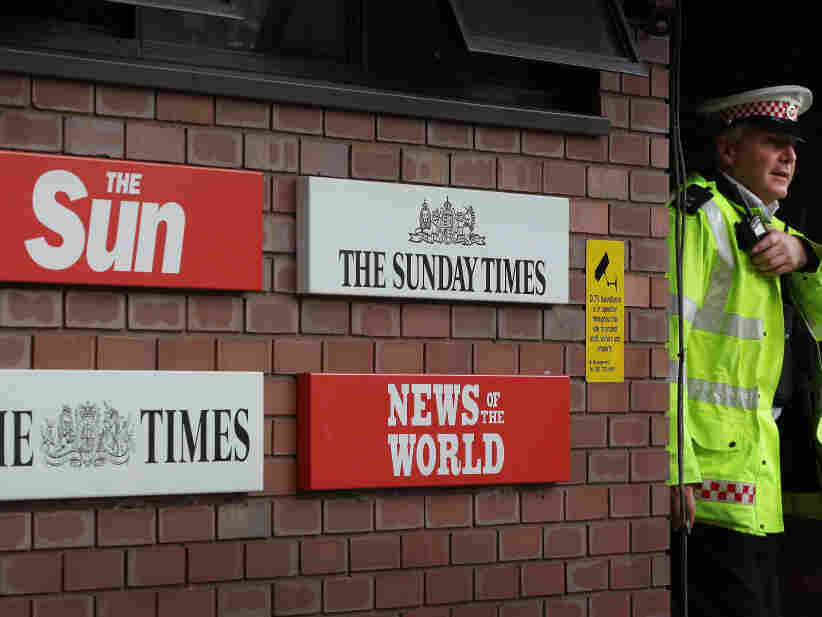 "This Sunday's News Of The World will be the last ever issue of the tabloid," James Murdoch, deputy chief operating officer of News Corp., just announced.

The tabloid — Britain's biggest — has been coming under increasing attack because of the scandal over how investigators it hired hacked into the phones of murder victims, celebrities, politicians and relatives of those killed and injured in the 2005 London bombings. Investigators say they are contacting thousands of potential hacking victims.

According to Sky News, another part of the Murdoch family's media empire, James Murdoch "said [Sunday's] newspaper would not run any commercial adverts this weekend, adding the advertising space would be donated to causes and charities." (He is Rupert Murdoch's son.)

Update at 4:38 p.m. ET. Approval of BSkyB Takeover In Jeopardy:

NPR's David Folkenflik tells Michele Norris that one of the big things to come of this is that Rupert Murdoch's bid to takeover British broadcaster BSkyB is now "at risk." The Guardian reports that the British government, which was set to approve the purchase tomorrow, has decided not to delay the hearing. But because they've gotten an incredible amount of responses from the public in reaction to the hackings a decision is unlikely to be made before the end of summer.

Andy Coulson, who was News of the World editor from 2003-2007 and later served briefly as communications chief for Prime Minister David Cameron, "has been told by police that he will be arrested on Friday morning over suspicions that he knew about, or had direct involvement in, the hacking of mobile phones," The Guardian reports.

It adds that Coulson "has always strenuously denied any knowledge of the illegal telephone hacking that is at the heart of the scandal currently rocking the Murdoch empire."

The Guardian, which has led the way in breaking the hacking scandal news, has collected its coverage here.

In recent days, especially after it was revealed that a News of the World investigator had hacked into the voicemails of a missing girl — and deleted some of them — several dozen of the tabloid's major advertisers pulled out.

More from his statement:

"The good things the News of the World does ... have been sullied by behaviour that was wrong. Indeed, if recent allegations are true, it was inhuman and has no place in our Company."

"The News of the World is in the business of holding others to account. But it failed when it came to itself.

"In 2006, the police focused their investigations on two men. Both went to jail. But the News of the World and News International failed to get to the bottom of repeated wrongdoing that occurred without conscience or legitimate purpose.

"Wrongdoers turned a good newsroom bad and this was not fully understood or adequately pursued. ...

"While we may never be able to make up for distress that has been caused, the right thing to do is for every penny of the circulation revenue we receive this weekend to go to organisations — many of whom are long-term friends and partners — that improve life in Britain and are devoted to treating others with dignity. ...

"I want all journalism at News International to be beyond reproach. I insist that this organisation lives up to the standard of behaviour we expect of others."