Accessibility links
2011 World Cup: U.S. Women Likely To Wear 'Black Widow' Uniforms Against Brazil : The Two-Way The U.S. women's soccer team looks for a spark when they play Brazil in an elimination match of the FIFA Women's World Cup. One source of inspiration may be their new all-black uniforms, which the team will reportedly wear for the first time at the 2011 Cup. 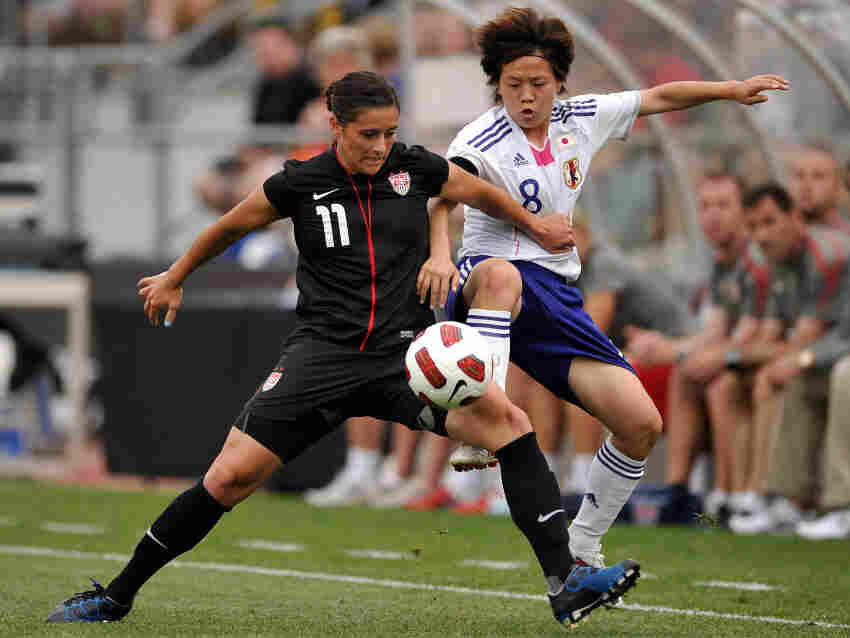 A Good Luck Charm? The U.S. women's team is undefeated when wearing all black since the uniforms were introduced on May 14. In that game against Japan, Ali Krieger battled for control of the ball. Jamie Sabau/Getty Images hide caption 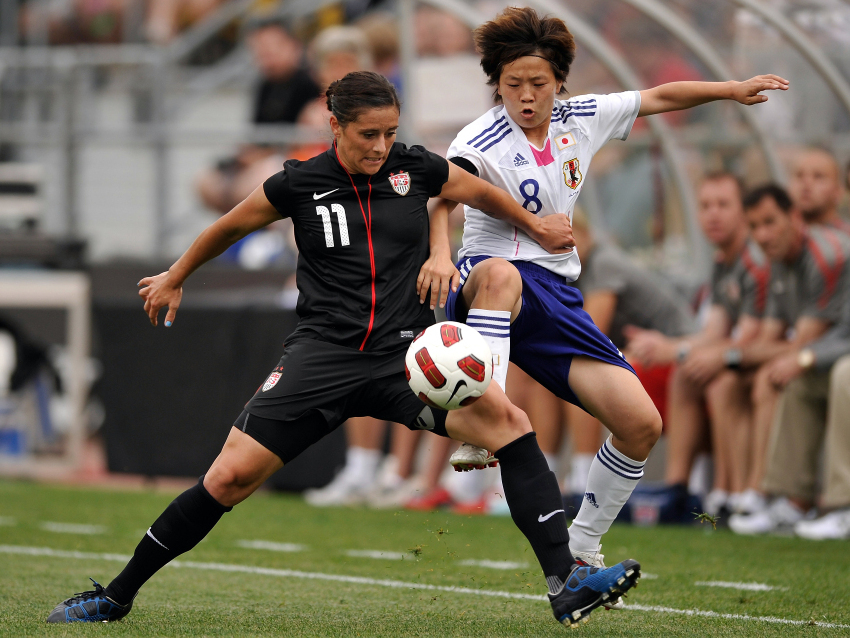 A Good Luck Charm? The U.S. women's team is undefeated when wearing all black since the uniforms were introduced on May 14. In that game against Japan, Ali Krieger battled for control of the ball.

The U.S. women's soccer team will be looking for a spark when they play Brazil Sunday in an elimination match of the 2011 FIFA Women's World Cup. One source of inspiration could be their new all-black uniforms, which the U.S. team reportedly plans to wear for the first time in Germany.

The all-black uniforms (or "kit," as we call it in the global-inflected world language of international soccer... or, um, football), might help the U.S. women rise to the occasion and defeat Brazil, thus proving that they're more mature and focused than the squad that lost its first-ever group stage match against Sweden and squandered a chance to win Group C.

Described by Nike as evoking a Black Widow spider, the black kit will give U.S. spectators something more to talk about besides the Americans' chances against Brazil and its five-time FIFA player of the year, Marta.

The uniforms have been a hot topic. During the U.S. opener against North Korea, a soccer fan here at NPR shot me a note with some of her thoughts about the exciting match (somewhat superfluously, actually; I heard her yelling from down the hall).

Then she added, "I hate to be a girl...but the uniforms? Really? As soon as anyone starts paying attention, they will start complaining about the uniforms. They look so silly."

It turns out that someone had been paying attention, and complaining, already. In April, Jennifer Doyle wrote on her From A Left Wing blog that "This is quite simply the ugliest women's football jersey I have ever seen."

Another NPR soccer fan said, "I agree that the U.S. uniforms are tragic (though Canada's poncho-esque kits are a close second)."

So, I asked Nike media relations manager Tim Yu about the U.S. team's uniforms. And like with most sportswear, it turns out that they're the result of lots of thinking about function and style.

"The kits are made of a new recycled polyester DriFit yarn that is designed to keep players cooler and more comfortable," Yu says — a possibly huge advantage in the heat and humidity that marked many of the early matches in Germany.

The jerseys are made of, essentially, recycled bottles. In an email, Yu said that "each jersey contains around 8 plastic bottles."

Nike says that DriFit is 15 percent lighter than the previous sports fabric, which makes it sound something like the Michelob Ultra of the uniform world.

That all sounds fine. But here's where we get to the part that makes some fans, and fashion observers, uneasy. "The kit is designed specifically for the female athlete, to enhance the range of motion and create a uniquely feminine silhouette," Nike said back in the spring, when it (and U.S. Soccer) announced the national team's new uniforms.

So far, so good. I've heard from other sources that the U.S. players had some input in the design, and it's understandable that they'd want a kit that's designed for their bodies and does a good job of managing heat.

But then, it seems, fans and fashionistas go a little nuts when it comes to this next part. "Capped sleeves and a high neckline with v-neck piping were added to create a striking aesthetic," in Nike's view.

It's unclear how contagious that view is. Several onlookers, Doyle included, have unfavorably compared the team's white "home" kit to a nurse's outfit. There seems to be less outcry against the black "away" uniform, which features "a black bodice and red piping inspired by the beautiful but deadly Black Widow spider," Nike says.

Of course, there may be less outcry just because the black kit has been worn in fewer games. But at least one reviewer fell in love with it.

For anyone wondering if the U.S. will be playing in the full sun when they're wearing black Sunday: It'll be 5:30 p.m. in Germany when the U.S. plays Brazil. That's 11:30 a.m. ET. I might not know all there is to know about fashion, but wouldn't the 8:30 p.m. (local time) game against Sweden have been the time to break out the formal gear?

Whether they love or hate the new uniforms, there's some good news for U.S. fans hoping the team advances to the semifinals: So far, the Americans are undefeated when they wear the Black Widow unis. The last time the U.S. wore the black kit was in June, when it beat Mexico, 1-0. The all-black look was introduced in a 2-0 win over Japan in May.

Still, the U.S. women could be forgiven for hoping history plays only a small role in Sunday's match. Because in the 2007 Women's World Cup, the Brazilians handed them their worst-ever loss, 4-0.

If the U.S. women win Sunday and you decide you just have to have a uniform for yourself, they're being sold through the U.S. Soccer store. A full kit, including socks, will run you $122.37 before tax. A jersey by itself — white or black — costs $71.99. If that seems steep, you have our apologies for passing along the info that they're made from recycled plastic bottles. 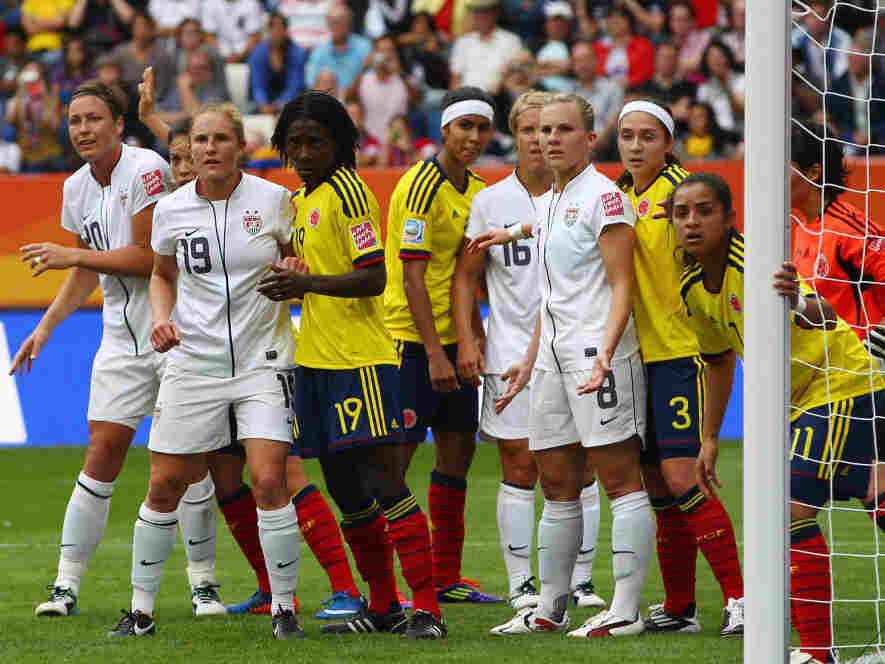 U.S. players, in white, line up for a corner kick against Colombia in a group stage game of the 2011 Women's World Cup. The white jerseys have been criticized as resembling a nurse's uniform. Alex Grimm/Getty Images hide caption 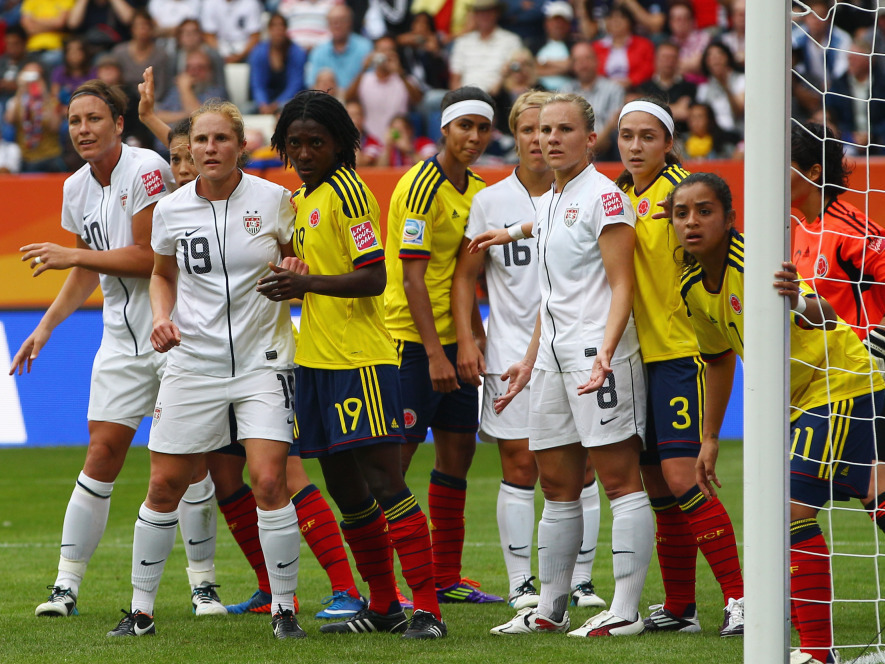 U.S. players, in white, line up for a corner kick against Colombia in a group stage game of the 2011 Women's World Cup. The white jerseys have been criticized as resembling a nurse's uniform.