Accessibility links
Obama On Deficit Deal: 'If Not Now, When?' : The Two-Way Saying he is prepared "to take significant heat" from members of his own party in order to achieve meaningful debt and deficit reduction, President Obama this morning again pushed for a big, long-term budget deal with Republicans.

Obama On Deficit Deal: 'If Not Now, When?'

Obama On Deficit Deal: 'If Not Now, When?' 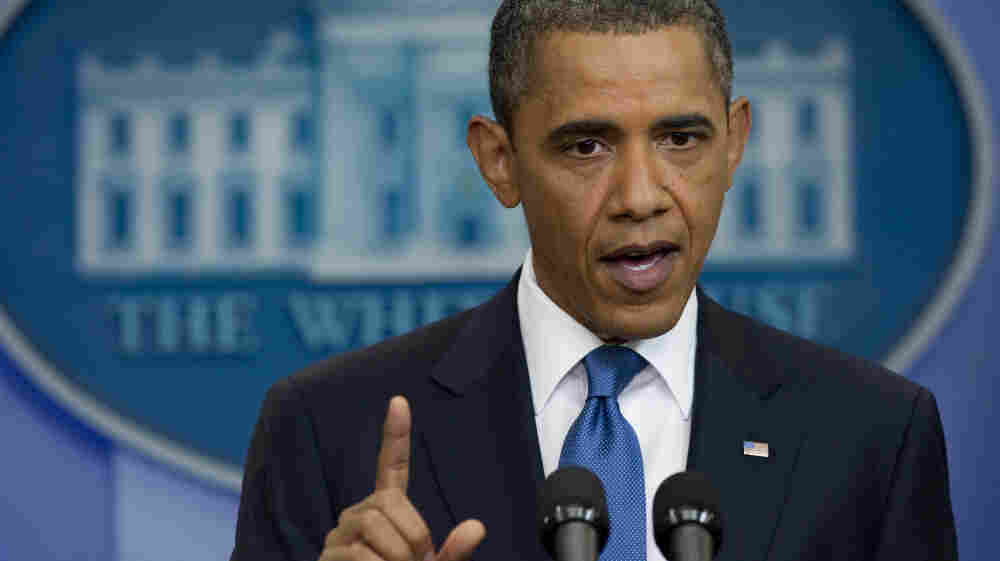 Saying he is prepared "to take significant heat" from members of his own party in order to achieve meaningful debt and deficit reduction, President Obama this morning again pushed for a big, long-term budget deal with Republicans.

And he heaped praise on House Speaker John Boehner (R-OH) for his efforts to strike such a grand bargain, even though the Republican leader has said that he probably can't get such a plan approved by members of his party. The president said that both he and Boehner need to convince skeptics in their parties' ranks of the need to compromise in order to achieve results.

"If not now, when?" Obama asked, underscoring what he said is the opportunity now to get a deal done.

The president also flatly declared that an agreement will be reached in time to prevent a default by the federal government after Aug. 2, the deadline for increasing its "debt ceiling" on borrowing.

And he said he will not accept any temporary fixes. "We don't manage our affairs in three-month increments," he said.

We live-blogged as the president spoke to reporters during a news conference in the White House briefing room. Scroll down and read "up" if you want to see how the event played out.

NPR's Scott Horsley reports from the White House that today's budget talks between the president and leaders of congress (Republicans and Democrats) just concluded. Aides, though, have been meeting almost continuously in recent days and presumably will continue to do so.

Continuing to speak about current conditions, the president says that "what we can do is solve this underlying debt and deficit problem" so that then, there can be debates about "strategies that we could pursue to focus on targeted job growth."

The economic stimulus package passed shortly after he became president, Obama says, prevented a depression — but also "stabilized [the economy] at a level where unemployment is still too high and ... can't make up for al the jobs that were lost before I took office" and in the first months after he took office.

Paraphrasing former Sen. Bob Dole (the 1996 GOP presidential nominee), the president says that if Republicans and Democrats both compromise, it's as if "everybody gets in the boat at the same time — it doesn't tip over."

Asked if the administration is working on any contingency plans in case a deal on raising the federal debt ceiling is not reached by the Aug. 2 deadline, the president flatly states that "we are going to get this done by Aug. 2."

If a big deficit-reduction deal can be reached, Obama argues, and Americans and the world see "Washington acting responsibly ... compromises being made ... the debt and deficit being dealt with," then confidence will rise among businesses and foreign investors — leading to job growth.

"If we're going to actually solve the [deficit] problem," Obama says, "there are finite ways of doing it." Cutting spending is one side, but too much of it puts the burden "on people who can least afford it ... and that's not fair."

His goal is to "strengthen Social Security to make sure those benefits are there in the out years," Obama says. And the reason to include such entitlement spending in the current discussion is that "if you're going to take a bunch of tough votes, you might as well do it now."

"It is hard to persuade people to do hard stuff that entails trimming benefits and increasing revenues," the president says.

"I think Speaker Boehner [R-OH] has been very sincere about trying to do something big," the president says. But, "his politics within his caucus is very difficult" and too many lawmakers have been rewarded politically for saying "irresponsible things."

Some of his fellow Democrats, Obama adds, are also unwilling to take action on such things as soaring costs for entitlements which need to be tackled if deficits are to be brought under control over the long-term.

If a deal isn't reached to raise the debt limit by the Aug. 2 deadline, Obama says, the reaction in financial markets to the news that the U.S. government could no longer meet its obligations would "create a recession and throw millions out of work."

"If they don't budge, period," Obama says of the GOP leaders, "if it's 'my way or the highway,' then we're probably not going to get something done."

After saying "I'm prepared to take significant heat from my side to get something done," the president adds that Republican leaders need to be willing to do the same.

Obama says he will not accept a deal that merely extends the discussion another 30, 60 or 90 days by temporarily raising the debt ceiling. "We don't manage our affairs in three-month increments," he says.

Hammering out as big a deficit-reduction deal as possible, the president says, would "give the American people confidence that this town can actually do something once in a while."

After praising House Speaker John Boehner's effort to reach as large a deficit-reduction deal as possible, the president asks those lawmakers who are balking at that idea: "if not now, when?"

"We're going to meet every single day until we get this thing resolved," the president says of the bi-partisan negotiations.

Update at 11:12 a.m. ET: Two-Minute Warning. According to CBS News' Mark Knoller, reporters were just given the "two-minute warning," so it should be getting started shortly.