Accessibility links
FIFA World Cup 2011: U.S. Defeats France, 3-1, In Semifinal : The Two-Way The American women hope to win the World Cup for the first time since 1999. The win comes despite a 27-12 shooting edge for the French women. The Americans will face either Sweden or Japan, who play this afternoon. 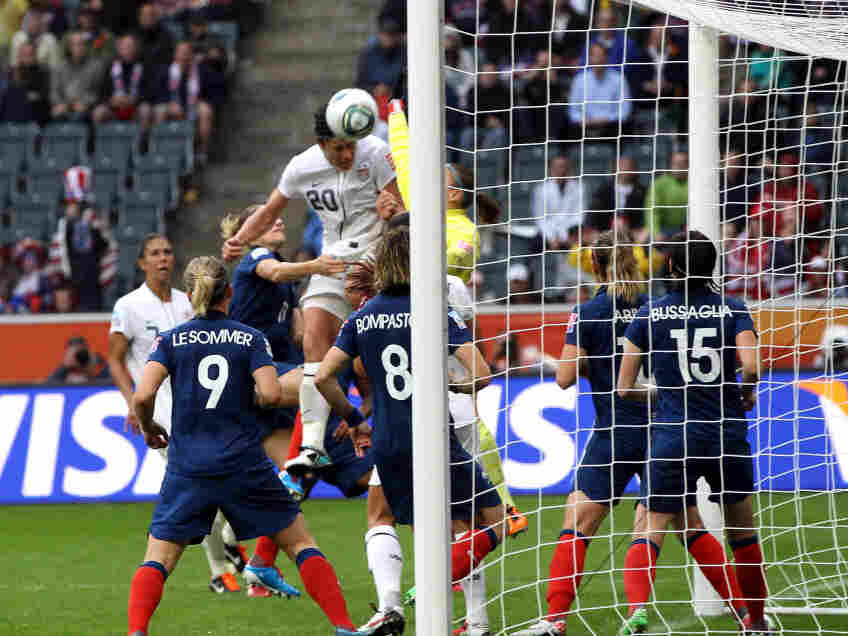 The U.S. women's national soccer team has beaten France, 3-1, to advance to the World Cup final for the first time since 1999. In the July 17 match, the U.S. team will face either Sweden or Japan. Those two teams play Wednesday afternoon. Update: Japan wins, sets up U.S.-Japan final.

In the semifinal against France, Lauren Cheney scored from close range to give the U.S. team an early 1-0 lead. But France often dominated play, maintaining possession and taking 15 more shots on goal (27) than the Americans (12).

In the second half, Abby Wambach and Alex Morgan added late goals to turn a tight 1-1 tie into a 3-1 victory.

"Abby, she's just the best. I'm very happy to have her on our team," says coach Pia Sundhage on the field in a post-game interview. Wambach scored the go-ahead goal once again for the American side.

Our coverage of the match:

Update at 1:50 ET: The game is over, and the players are hugging one another. The close-fought game saw only one card: a yellow, given in the 90th minute to France's Elodie Thomis.

Update at 1:48 ET: Official time is up; two minutes added. The Americans are seeking to control the ball and move on to the final.

Update at 1:39 ET: Alex Morgan makes it 3-1 with a breakaway goal when she squeezed the ball over and past the French goalie, with four defenders in pursuit. Goal came in the 82nd minute.

Update at 1:37 ET: Wambach scores after heading in Lauren Cheney's corner kick. The goal in the 79th minute makes it a 2-1 lead over France.

Update at 1:33 ET: Gaetane Thiney has annoyed Hope Solo by coming from behind to ram the ball free from her grasp as she walked forward to kick the ball into play after a save. Solo talks to ref as ball nearly trickles in goal; crowd whistles.

Update at 1:30 ET: Possession was even at the half, but now France has taken over, controlling the ball 56 percent of the time, ESPN says. They've taken 23 shots, to 7 for the U.S. women.

Update at 1:25 ET: Second-half substitutions for the U.S.: Megan Rapinoe in for Carli Lloyd, and Alex Morgan for Amy Rodriguez. But right now, the French are dominating play.

Update at 1:21 ET: U.S. is playing with 10 players, as defender Ali Krieger is on the sideline sorting out an ankle injury that seems to have come after a nice tackle.

Update at 1:12 ET: France's Sonia Bompastor has scored a goal after the ball nearly came in for a header — but instead drifted into the right corner of the net. The goal came at the 55th minute.

Update at 1:06 ET: In the first minute of the second half, Americans Ali Krieger and Hope Solo had to thwart another deep threat from Gaetane Thiney as she ran inside the penalty box. Solo leapt on the ball to end the chance.

Update at 12:40 ET: Abby Wambach collided with defender Sonia Bompastor and the French goalie in front of the net, as a quick, low crossing pass came in. Bompastor was shaken up; she and Wambach shake hands.

Moments earlier, Wambach narrowly missed a header from the left side of the goal, after defender Christie Rampone streaked down the right side of the field and lofted a crossing pass toward the net. 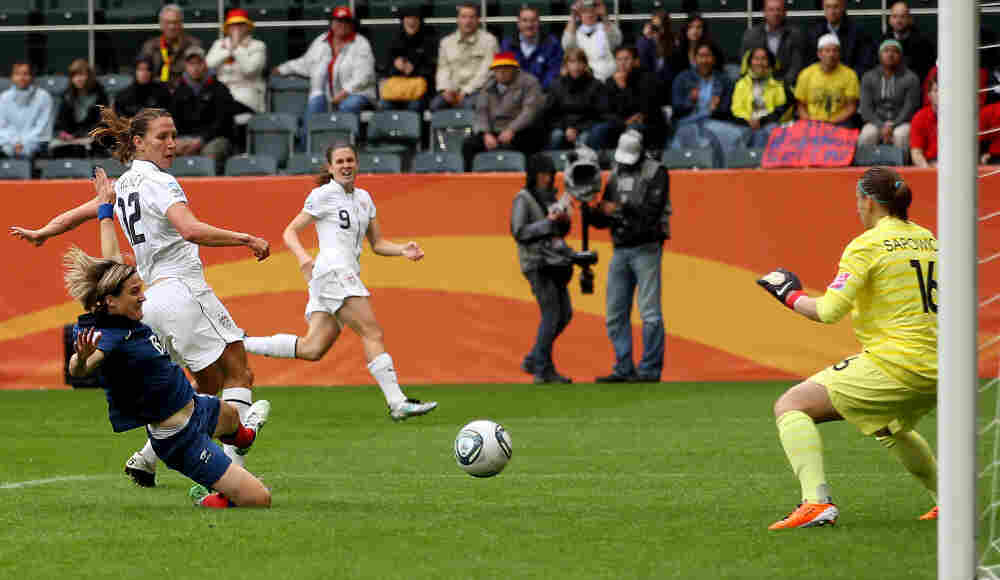 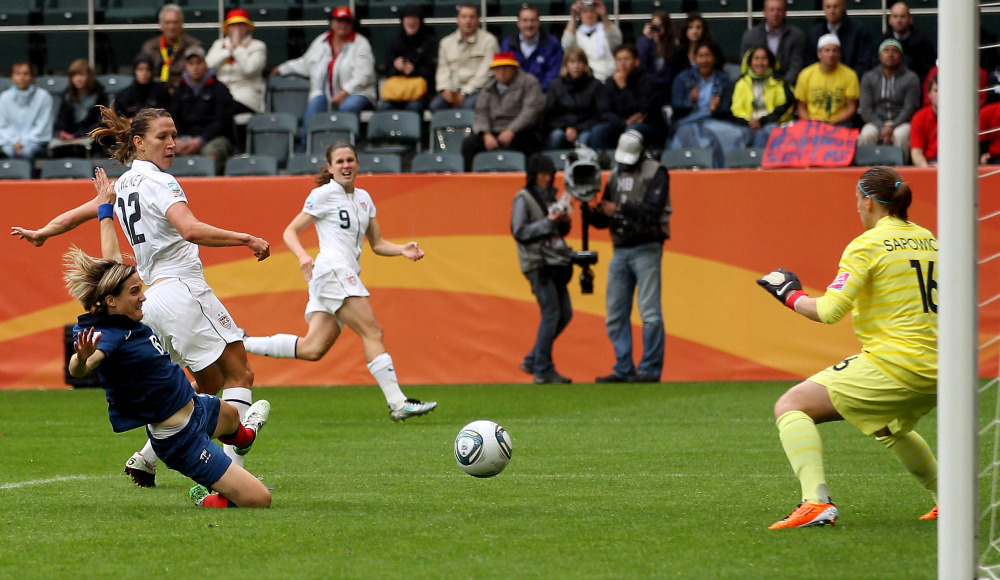 Lauren Cheney of the U.S. scores an early goal after a low, hard pass from Heather O'Reilly, during the FIFA Women's World Cup 2011 semifinal match with France.

Update at 12:37 ET: France has now taken 13 shots, to the Americans' three. France's Louisa Necib and Gaetane Thiney have been particular threats, as they've found running room up the center of the field.

Thiney had a golden chance to score, finding herself facing the U.S. goalkeeper from the left side of goal. But her shot went wide, as American Hope Solo cut down the shooting angle by rushing toward her.

Update at 12:28 ET: The moments after Cheney's score held lots of action in the midfield, but now the match has settled into more acute offensive threats from both sides. The French have struck several hard, long shots that Hope Solo has gathered without incident.

According to ESPN announcer Ian Darke, U.S. coach Pia Sundhage told him that during her days of playing for her native Sweden, she once scored four goals against France.

The FIFA online match tracker is inadvertently amusing: "A player from France is adjudged to be in an offside position."

American Heather O'Reilly fed a perfect pass to Lauren Cheney, and the result was a score from close range in the ninth minute, as the U.S. women's national team got an early edge over France in the semifinals of the FIFA Women's World Cup.

In the game's early minutes, play was fast and spirited, each team hoping to get that all-important first goal.

U.S. goalkeeper Hope Solo had to deflect a hard shot from Louisa Necib, sending it over the top of the goal post. And Laurel Cheney had a beautiful run through the midfield in the fifth minute, eluding defenders before dropping the ball off.

The U.S. arrived in the semifinals after a nerve-wracking penalty kick win over Brazil.