Accessibility links
Women's World Cup 2011: In Final, U.S., Japan Vie To Make History : The Two-Way The FIFA Women's World Cup final pits the U.S. Women's National Team against Japan Sunday at 2:45 p.m., ET. During the game, the Two-Way will be live-blogging the action, as Abby Wambach leads her team against prolific striker Homare Sawa. We'll also have a post-game wrap-up. 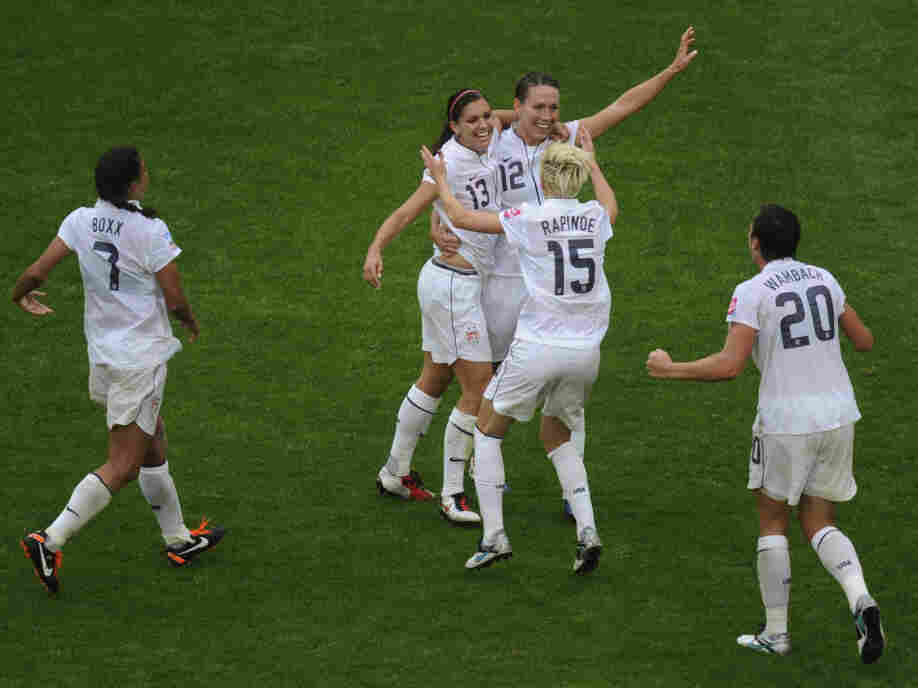 Power In Reserve: Strikers Alex Morgan (second from left) and Lauren Cheney have added firepower to the U.S. lineup, while midfielder Megan Rapinoe has adjusted to coming in off the bench to energize the American attack — and set up goals for Abby Wambach. Odd Andersen/AFP/Getty Images hide caption 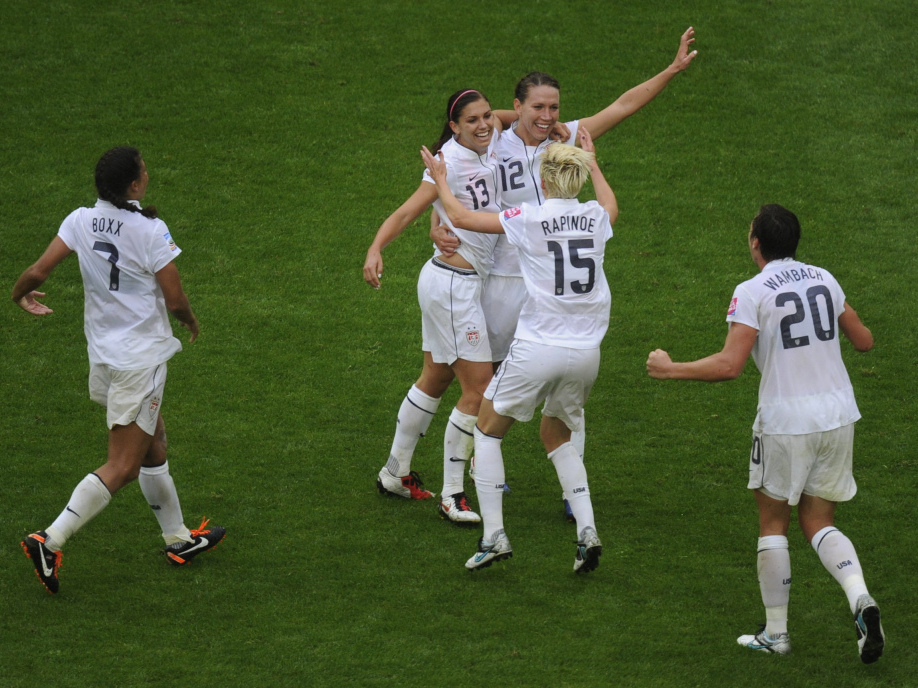 Power In Reserve: Strikers Alex Morgan (second from left) and Lauren Cheney have added firepower to the U.S. lineup, while midfielder Megan Rapinoe has adjusted to coming in off the bench to energize the American attack — and set up goals for Abby Wambach.

The FIFA Women's World Cup final pits the U.S. women's national team against Japan Sunday at 2:45 p.m., ET. During the game, the Two-Way will be live-blogging the action, as U.S. star Abby Wambach leads her team against prolific striker Homare Sawa. We'll also have a post-game wrap-up.

The Americans got into the final thanks to a 3-1 semifinal victory over France — which took more shots and controlled the ball more than the U.S. side. And like the French team, Japan is good at using precise passes to control possession and create scoring chances.

By contrast, the Americans have been a tad inconsistent but wildly successful, making the most of an ability to adjust to their opponents' strategies and personnel. It's also nice to have a confident leader in Wambach, an elite goalkeeper in Hope Solo, and the speed and size to put on swift counter-attacks.

Here are some things to consider:

Sunday's title match will be Japan's first. But the Japanese players have shown few signs of nerves at this World Cup — in interviews, they say they want to win, to inspire and console the victims of the earthquake and tsunami that their country is still coping with.

"Even little things, like a win, can give people courage and hope," Japanese coach Norio Sasaki told the AP. "And when we play the final, we are not going to think about the end result. We are just going to do what we can."

That sentiment has made Japan a favorite in many fans' hearts. And even the U.S. players say they're impressed with the Japanese, and their motivations.

Discussing Japan, Hope Solo told the AP, "They are playing for something bigger and better than the game. And when you're playing with so much emotion, and so much heart — that's hard to play against. So I think it's going to be an incredible final that people didn't expect to see."

So, the Japanese are many fans' sentimental favorite. But the American women have motivation of their own — to win the World Cup for the first time since 1999. With the nail-biting wins the U.S. team has pulled off to reach this point, anything else will be met with deep disappointment.

"We want all those things that have happened within the last... few days to be worth it, and to be meaningful," Wambach said. "And the only way we can do that is to secure a win on Sunday."

As the defending Olympic champion and the world's No. 1 team entering this tournament, the U.S. women have proven they know how to win, especially in clutch situations. First they needed to beat Italy to secure the final slot in the 2011 Cup tournament. Then they eked out a difficult game against Brazil on penalty kicks.

And now, with just one more win, the current U.S. women's national team could put their names next to those of Mia Hamm, Brandi Chastain and Julie Foudy.

"We've had the mentality from day one that we came here for one reason," Solo said. "Our one and only goal was to win this tournament, and I think people are staying pretty true to that."

The Americans' play — and their seeming addiction to exciting, do-or-die situations — has won them fans in World Cup host Germany, as well as back home.

Fellow athletes, from NFL quarterback Aaron Rodgers to NBA star Kevin Durant — who said he might name his daughter Hope Solo — have been captivated by their seat-of-their-pants wins, but also by the joy they bring to the game.

And Wednesday, the team learned it had won Best Play at the ESPY Awards, for Wambach's header at the end of overtime that forced the quarterfinal match against Brazil to be decided by penalty kicks.

So far, TV viewership of the 2011 Cup is up 200 percent over the 2007 tournament held in China, according to Nielsen.