Accessibility links
Eagle Love Story: Injured Mates Reunited At Rehab Center : The Two-Way When an injured bald eagle was brought to a rehabilitation center near Buffalo, N.Y., last week, there was a surprise: The female who was being treated there must have been his mate because they responded to each other immediately. 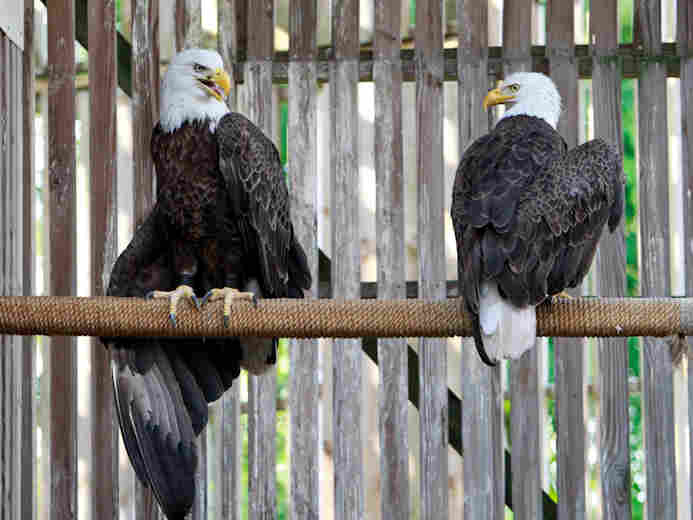 Back together. The female, left, taught her mate how to get up to the perch. Wendi Pencille/Bless the Beasts Foundation hide caption 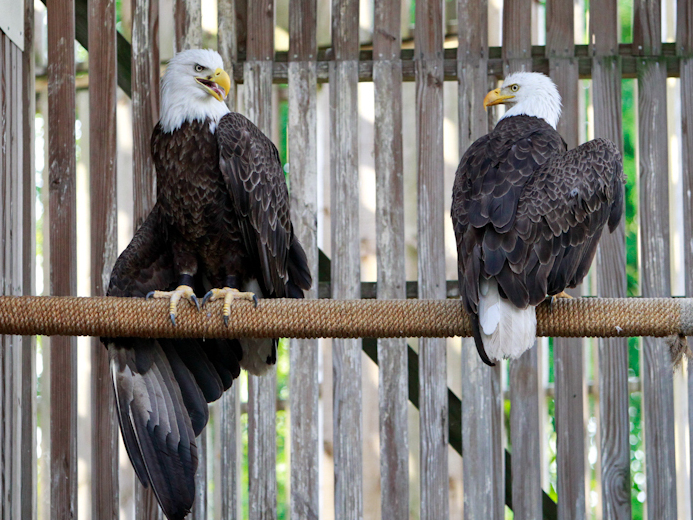 Back together. The female, left, taught her mate how to get up to the perch.

"Two seriously injured bald eagles, found two months apart and more than a mile away from each other near the Iroquois National Wildlife Refuge," in Western New York State, "were rescued and reunited in a wildlife rehabilitation facility in Medina last week," the Buffalo News reports.

And on today's All Things Considered, raptor rehabilitator Wendi Pencille tells host Michele Norris the remarkable story of what it was like when the two lovebirds were reunited.

The first eagle to come to her wildlife center, Pencille said, was the female — which has a snapped tendon in a wing and won't be able to be released in the wild. Then last week, Pencille got the report of an injured male eagle and brought him to the center. He most likely got hurt in a fight with another eagle and won't be able to live in the wild again either because part of a wing was amputated. (Update at 10 p.m. ET: Earlier, we said the male had hit a power line. Pencille got in touch to correct us. The female was injured that way.)

Pencille was nervous about what would happen next, but needed to see if the two birds could coexist at her center. There just wasn't room to put the second eagle anywhere else but in the cage with the female.

"Normally when we introduce raptors in a cage together that are not related, there's an altercation," she told Michele. Sometimes, it's a fight to the death.

"I put the male in the cage ... and he was very frightened," Pencille continued.

Then, "all of a sudden he makes a call. ... And as soon as she hears that ... she goes just out of her mind trying to get his attention."

And that started a series of events that surprised Pencille: The female, after many attempts, taught the male how to hop up a series of steps to her perch. She actually jumped down and showed him what to do.

In other words, two mates who never would have seen each other again if the male hadn't also been brought to the center, are now together.

We've got a long audio clip of Pencille telling Michele about what happened. (There's one short pause about 16 seconds in where we clipped out a bit of the conversation.)

More from their talk will be on today's All Things Considered. Click here to find an NPR station that broadcasts or streams the show. Later, we'll add the as-broadcast version of the interview to the top of this post.

For information about the Bless the Beasts Foundation network of wildlife rehabilitators in Western New York, click here. And Pencille has posted many photos of the eagles here.

All this talk about eagles reminded us that we should check on how things are going in Decorah, Iowa, home to the "eagle cam" that so many folks were watching this spring.

Good news: the three eaglets there have left the nest.

Update at 4:40 p.m. ET: In other raptor-related news, a veterinarian in Oregon performed mouth-to-beak CPR on a injured bald eagle during a recent surgery, according to KTVZ-TV ("central Oregon's news leader).