Accessibility links
Oscar Pistorius Qualifies To Run At Track Worlds : The Two-Way Oscar Pistorius, the sprinter who runs on prosthetics made from carbon fiber, has officially qualified for the World Championships in Athletics, which will be held in Daegu, South Korea. 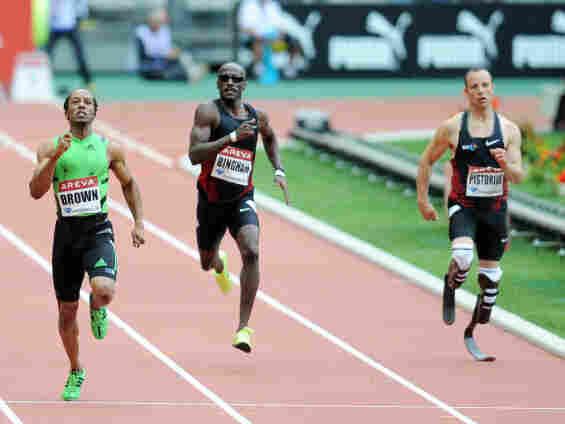 South African runner Oscar Pistorius, right, runs in the 400 meter race in France, July 8, 2011. His time in a race in Italy Tuesday was good enough to send him to the World Championships. Franck Fife/AFP/Getty Images hide caption 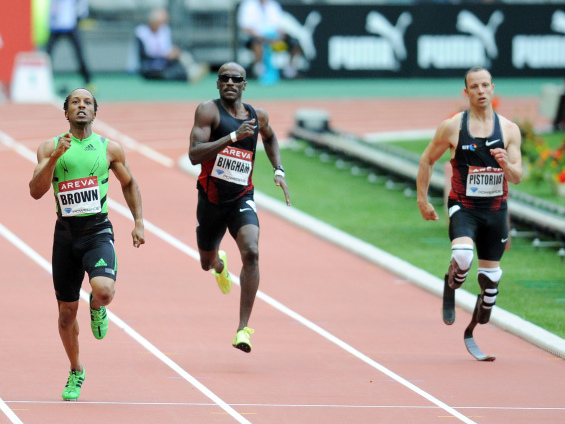 South African runner Oscar Pistorius, right, runs in the 400 meter race in France, July 8, 2011. His time in a race in Italy Tuesday was good enough to send him to the World Championships.

Oscar Pistorius, the sprinter who runs on prosthetics made from carbon fiber, has officially qualified for the World Championships in Athletics, which will be held in Daegu, South Korea.

It's been a good month for Pistorious — as The New York Times reported last week, he's the face of an ad campaign for Thierry Mugler's new fragrance.

The ads will begin to run this fall — shortly after Pistorius runs in the track and field World Championships in late August. And depending on his performance, South Africa's Olympic team might consider putting him on the roster for the 2012 Summer Games in London.

But in early 2008, it was the perception that the J-shaped prosthetics could give Pistorius an edge that led track's governing body to ban him from competing in track events at the Olympics and World Championships. Pistorius fought that ruling, and in May of 2008 he won the right to compete in elite events other than the Paralympic Games.

As a recent profile of the sprinter suggests, the fact that Pistorius runs on springy carbon fiber doesn't necessarily mean that he has an advantage at the track. A recent Sports Illustrated article by David Epstein explains:

"Getting out of the blocks, you have to really lift your knees up," Pistorius told Lampkin [Andre Lampkin, an aspiring Paralympic athlete]. "If you don't, you'll drag your legs along the ground." When Pistorius ran his first 100-meter race in 2004, he had to start standing up. And because he has no ankle flexion and no toes, maintaining his balance while accelerating at the gun has been a huge challenge. In the 2004 Paralympic Games, he essentially fell out of the blocks in the 200 meters, before coming back to win. In every race he has run against able-bodied athletes, Pistorius has been the slowest out of the blocks — and he always will be.

Pistorius, 24, was born without fibulas in his legs, which were then amputated below his knees.

In 2008, Pistorius talked with NPR's Neal Conan about the first time he ran using the carbon-fiber prosthetics, called "Cheetahs." That's when he realized that their lack of a heel made it difficult to balance on them — and also to stop.

"I couldn't slow down, I didn't know how to," he said. "I ran straight into this wall at about, I guess, about 7 or 8 meters per second. And I took all the skin off my shoulder and my wrist. You know, I thought I'd never, ever run on these things ever again. It was extremely hard to balance, let alone use them."