Accessibility links
'Triangle Of Death' In Horn Of Africa; Famine Grips Southern Somalia : The Two-Way The United Nations has escalated its dire warnings about what's happening in the Horn of Africa, declaring today that drought and famine in southern Somalia threaten millions of people. 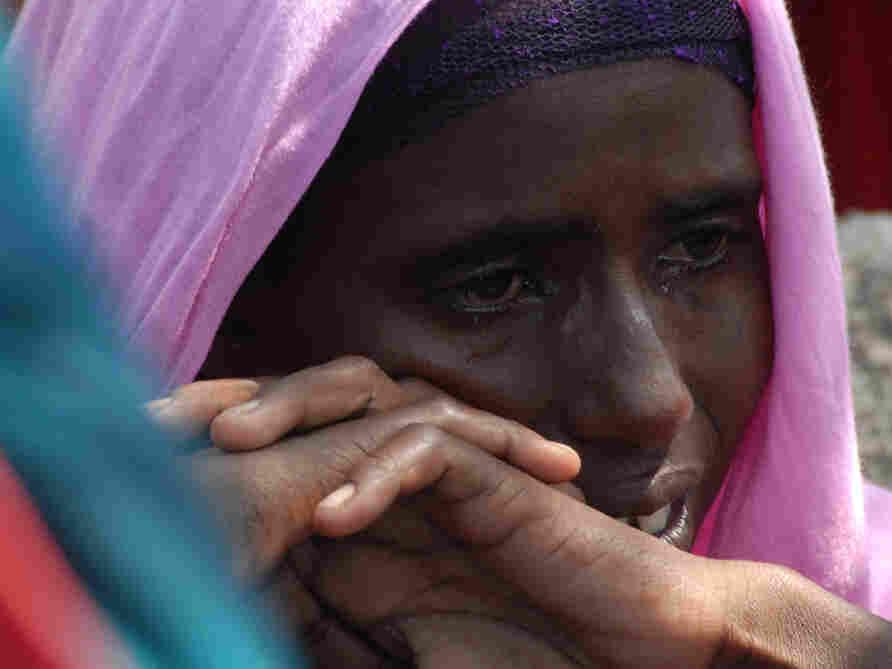 Monday (July 18, 2011): At a refugee camp near Mogadishu, a Somali woman cries after the death of one of her children. Mustafa Abdi/AFP/Getty Images hide caption 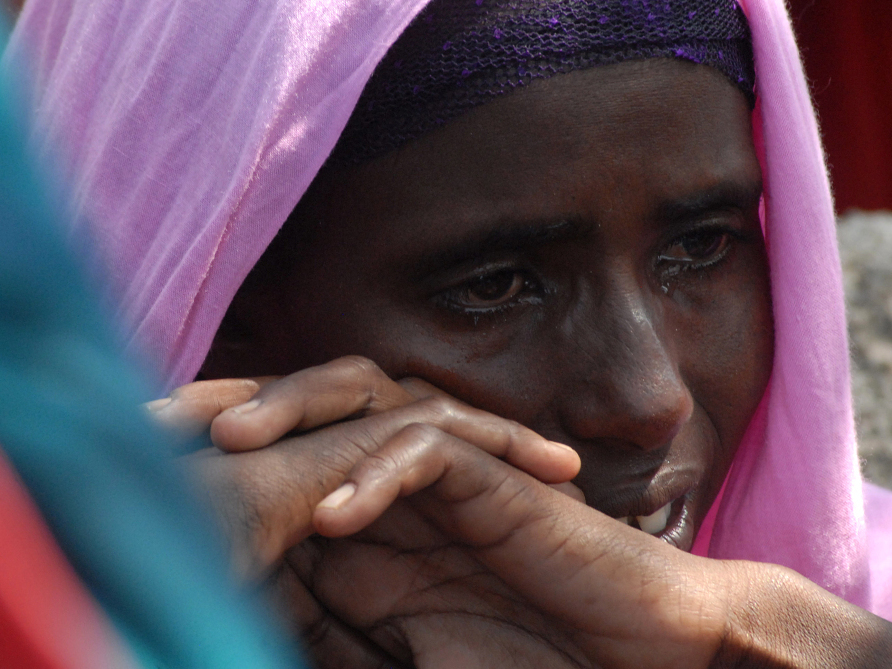 Monday (July 18, 2011): At a refugee camp near Mogadishu, a Somali woman cries after the death of one of her children.

As the United Nations escalates its dire warnings about what's happening in the Horn of Africa, declaring today that drought and famine in southern Somalia threaten millions of people, NPR's Ofeibea Quist-Arcton reports from a refugee camp in Kenya that an area straddling Somalia, Ethiopia and northern Kenya has been dubbed "the triangle of death."

She filed two reports for NPR's Newcast desk. It's estimated, she says, that in southern Somalia "30 percent of children [are] acutely malnourished and 4 in every 10,000 [are] dying each day." Ofeibea says the drought, famine and conflicts in the region are combing to form a "human catastrophe," aid workers warn.

Meanwhile, "access to Somalia itself and security remain a major challenge for relief workers," Ofeibea adds, "despite a pledge by the powerful, militant, al-Qaida linked Al-Shabaab" group to allow aid in.

According to a statement issued by Mark Bowden, the U.N.'s humanitarian coordinator for Somalia, "in the last few months, tens of thousands of Somalis have died as a result of causes related to malnutrition, the majority of whom were children."

During a briefing yesterday, State Department Assistant Secretary Johnnie Carson called on "all of those in south central Somalia who have it within their authority to allow refugee groups and organizations to operate there to do so."

The drought in southern Somalia is the worst in more than 50 years, Voice of America adds.

The State Department estimates that "in Ethiopia, at least 4.5 million people are in need of assistance. Almost 3 million people need assistance in Somalia. In addition to the hundreds of thousands of Somali refugees already in Kenya and in Ethiopia, new arrivals are coming in at staggering daily rates."

According to State: "Since October of last year, the United States Government has provided assistance to 4.4 million affected people, a total of $383 million of life-saving food, supplies, and other necessary aid, including 348,000 metric tons of food." Raj Shah, administrator of USAID, is headed to the region. Aid groups and organizations working in the region, State adds, include CARE, Save the Children, UNICEF, and the World Food Program.

USAID's web page with information about the U.S. response is here. Shah, the agency's administrator, is posting updates as he travels through the region on his Twitter page.

The World Food Program has put together a special "Horn of Africa Crisis" web page. You can also follow what it's doing on Twitter.

On Tell Me More today, al-Jazeera English correspondent Azad Essa tells host Michel Martin that "in a word, the situation is quite horrific."

Essa has been reporting from refugee camps where "between 40,000 and 60,000 people [live] in totally, ridiculously squalor conditions. Very, very poor hygiene, no sanitation. And it's just very very desolate. It's almost as if they have been abandoned by humanity."

Reuben Brigety, a deputy assistant secretary of State, was at a camp in the region last week. He tells Michel that he encountered one mother who "carried her polio-stricken [seven-year-old] daughter on her back for nine days with six other children in tow in order to get to a refuge in Kenya. And I could tell stories like that all day long."

Click here to find an NPR station that broadcasts the show.