Accessibility links
Deadly Explosion Rocks Oslo; Youth Camp Also Attacked : The Two-Way The explosion in Oslo killed at least seven people and injured more than a dozen others. The Associated Press said police told reporters the blast was caused by "one or more" bombs. Around the time of the explosion, a gunman attacked a youth camp.

Two tragic stories are playing out in Norway, where a large explosion today — or possibly more than one blast — caused deaths, injuries and extensive damage to government buildings in Oslo.

At the same time, there are reports that an individual dressed as a police officer opened fire at a youth Labor Party camp on an island in a fjord about 45 minutes from Oslo. News media in Norway say there were fatalities.

Authorities suspect that terrorists were likely behind the Oslo attack. And just before 2 p.m. ET they told local news outlets that they believe the events in Oslo and on the island of Utoya are connected.

We're following developments. Scroll down and "read up" if you need to start at the beginning. Be sure to hit "refresh" occasionally to see our latest updates.

Reuters, VG and NRK are reporting that police found unexploded devices at the youth camp that was the site of the shooting. Police believe the explosives belonged to the man arrested on the scene.

We are calling it a night on the blog, but obviously this story continues to develop. If anything major breaks, we will pop back in.

But meanwhile, we'll leave you with a few links to Norwegian-language news sites. We've linked to the English version of the sites via Google Translate. While the translations are sometimes spotty, you can understand a great deal of what's being reported. Here are the links:

Also the good people at Storyful have put together a helpful list of news organizations and people in Norway tweeting about the attacks.

Throughout the day, there's been many reports about who the man arrested is. Now, NRK and multiple other outlets are reporting that the man is in his 30s and an "Ethnic Norwegian." Quoting eyewitnesses, NRK reports the man is "tall" and "blond" and spoke a dialect used near Oslo.

The AP moved an alert that quoted an unnamed Norwegian police official saying it looks like the man is not "linked to Islamist terrorism." The official said the investigation is still ongoing and "things can change."

Earlier today at the Oval Office, President Obama said "our hearts" go out the Norwegian people.

"It's a reminder that the entire international community has a stake in preventing this kind of terror from occurring," the president said.

During a press conference, the AP reports that Norway's Justice Minister Knut Storberget said the man arrested in connection with the shooting at a youth camp near Oslo, is Norwegian.

The AP reports that Norway's Prime Minister Jens Stoltenberg said they would find those responsible and "hold them accountable."

Those behind the attacks "will not destroy our democracy," Stoltenberg said.

There are wildly conflicting reports from various outlets about how many people are believed to have been killed on the island. Here's how Norway's NRK is summing up that part of the story: "The police described the situation as chaotic, and can not yet determine with certainty how many people have died."

CNA research analyst Will McCants earlier this afternoon pointed to a claim of responsibility for the Oslo attack, posted on "jihadi forum" forum, from a group calling itself Helpers of the Global Jihad. Soon after McCants' original post, he tweeted that " 'Helpers of Global Jihad' now says its claim is not the official claim and it had nothing to do w/ operation. Says wait for official claim." And the first "claim" has been erased, according to McCants. So it's unclear whether it ever had anything to do with today's attacks.

McCants' original post about the claim, though, is showing up in some media reports.

"It is now clear that there is a connection between the explosions in the city center" and the shootings at a youth camp on the nearby island of Utoya, police tell Norway's NRK news.

According to Norway's NRK news, "seven people are confirmed dead" from the blast (or blasts, it's still not clear if there was more than one) in Oslo.

Bjorn Erik Jacobsen, head of information for the police in Northern Buskerud, tells Norway's NRK news that an individual has been arrested in connection with the reported shooting at a youth camp near Oslo. There's still no definite link between that incident and what happened in the city. There's also no official word on the casualties at the camp.

Norway's Varden newspaper is quoting a local "county secretary" as saying he saw four people get shot there.

Norway's NRK news says that terrified campers are texting and tweeting that they are hiding. There are also reports of some trying to swim to safety.

It's important to remember that at this point, much is not known about what's happening in Norway — for instance, whether the explosion (or explosions) in Oslo are related to the reported attack on the youth camp.

There's more on the other situation — which may not be related to the explosions. Norway's NRK news reports that "a person dressed as a police officer" reportedly fired shots at young people attending a Labor Party Youth League camp on the island of Utoya in a fjord about 45 minutes from Oslo.

"Oslo police officials say two people have been confirmed dead and 15 injured in a powerful bomb blast at the prime minister's office," The Associated Press now writes. And authorities say there were "one or more" bombs.

Aftenposten now writes that "TV 2 News channel reported that police also have received notification of a critical situation on Utoya, where Labour Youth is holding its annual summer camp." Journalist Ketil B. Stensrud messages that the prime minister has said on Norwegian radio "there is a critical situation at Utoya and several ongoing operations as we speak."

Utoya is an island in a fjord about 45 minutes from Oslo.

StoryfulPro has a curated Twitter list running here, and it includes English messages being posted by reporters in Oslo.

Aftenposten writes that while "experts are still cautious" about assigning blame if it turns out this was indeed a car bomb, they "expect it to be very likely that there are terrorists who are behind" it.

Norway has been part of the military campaigns in Afghanistan and Libya.

The BBC reports it has been told by officials that some injured people may be trapped in the damaged buildings.

Norway's NRK is now streaming its coverage here. Even if you don't speak the language, you'll likely be able to follow things.

Reuters and The Associated Press are both citing local NTB news as saying that police have confirmed the explosion was caused by a car bomb.

Norway's NRK news now reports that police are confirming "several" deaths. It also reports that officials are to hold a news conference at 5:30 p.m. local time — in about 20 minutes.

Olaf Furniss told the BBC he was nearby. "It was a huge blast that blew out all the windows" in buildings, he said. "At first I thought it was a gas explosion, but when I stepped outside all the windows had been blown out from one the main government buildings." The scene was one of confusion, he added.

There's a video feed here from VG-TV — though demand may be overwhelming its capabilities.

"Witness Ole Tommy Pedersen was standing at a bus stop about 100 yards [away] at around 3:30 p.m. [local time] when he saw the blast shatter almost all windows of the 20-floor highrise" that houses government offices, The Associated Press reports. "He said a cloud of smoke is billowing from the bottom floors. 'I saw three or four injured people being carried out of the building a few minutes later,' Pedersen told The Associated Press."

From Norway's Aftenposten: "Many people are bleeding in the street outside, hit by broken glass that fell from the broken windows."

Norway's Aftenposten newspaper writes (the translation may not be exact) that "our reporter passed Market Street and there is full chaos people running around bewildered. ... You can smell the sulphur fumes."

Norway's NRK News has many photos and other coverage here. It reports that:

-- At least eight people were injured.

-- All the windows in one government building were blown out. The photos show extensive damage.

-- That while there have been reports of a second explosion in the area, "it is not true." One of the agency's reporters at the scene says the sound was broken glass falling out of windows. 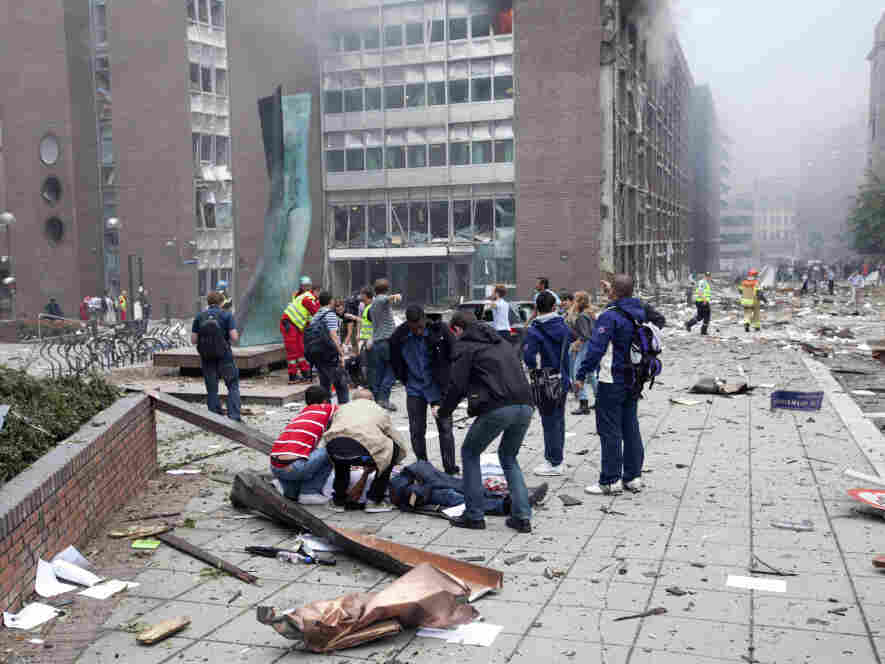 Injured people lay on the ground at the site of an explosion near the government buildings in Norway's capital Oslo earlier today (July 22, 2011). Holm Morten /AFP/Getty Images hide caption 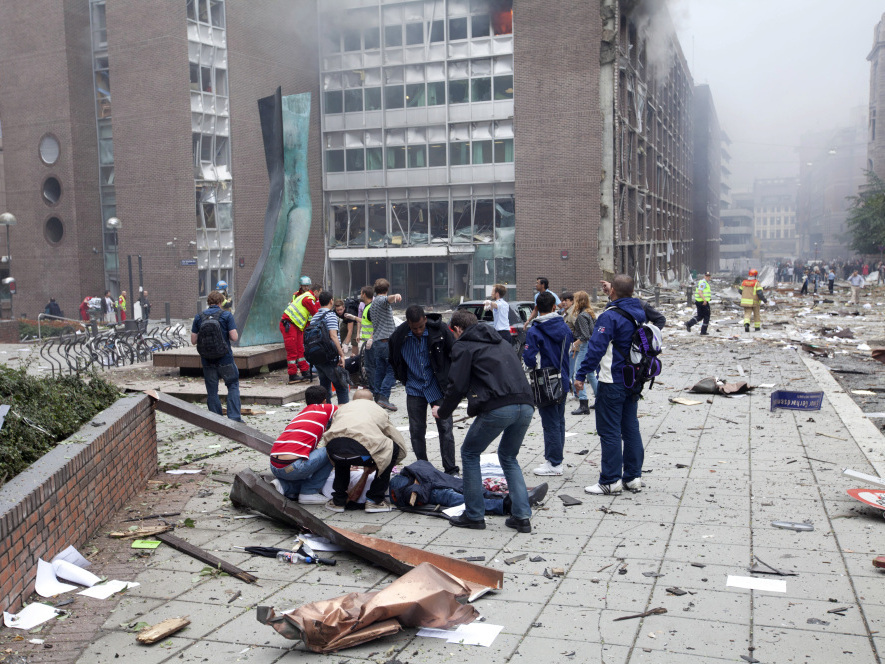 Injured people lay on the ground at the site of an explosion near the government buildings in Norway's capital Oslo earlier today (July 22, 2011).

News is just starting to come in about an explosion in Oslo, Norway.

The Associated Press says it "shattered windows and led to evacuations of office buildings near the government headquarters."

Reuters calls it a "huge explosion" and says that Prime Minister Jens Stoltenberg's office was among those damaged. The wire service says at least several people were injured.

There's no definitive word yet about the cause.

Some photos and videos are starting to show up via Twitter (#Norway), but we can't vouch for their credibility just yet.

We'll update this post as the story develops. Hit your refresh button to see our latest additions.