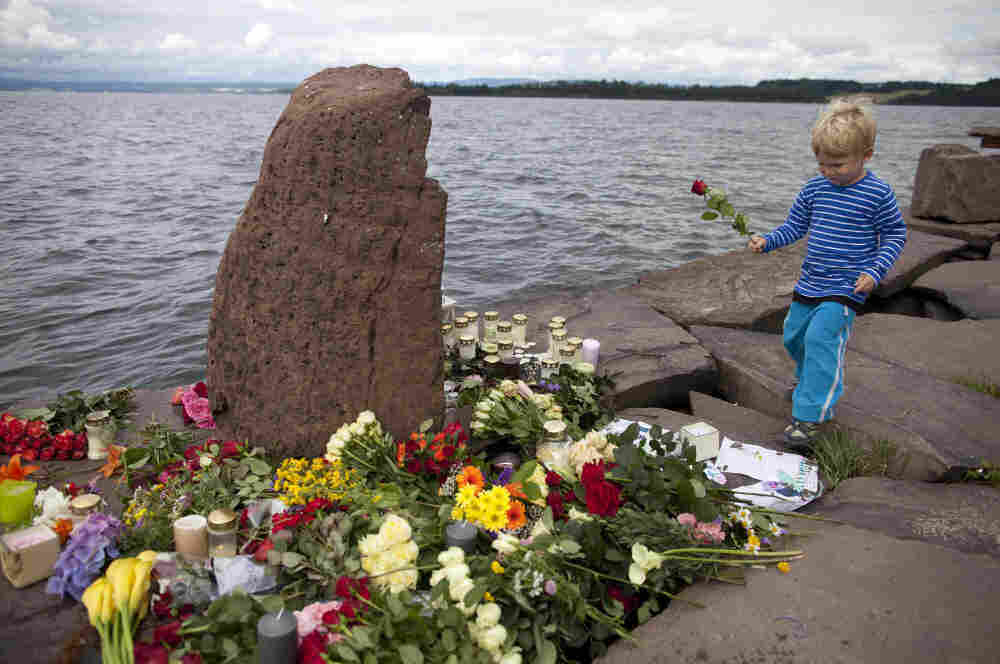 A child walks to place a rose amongst tributes in memory of those killed in the shooting massacre on Utoya island. Matt Dunham/AP hide caption 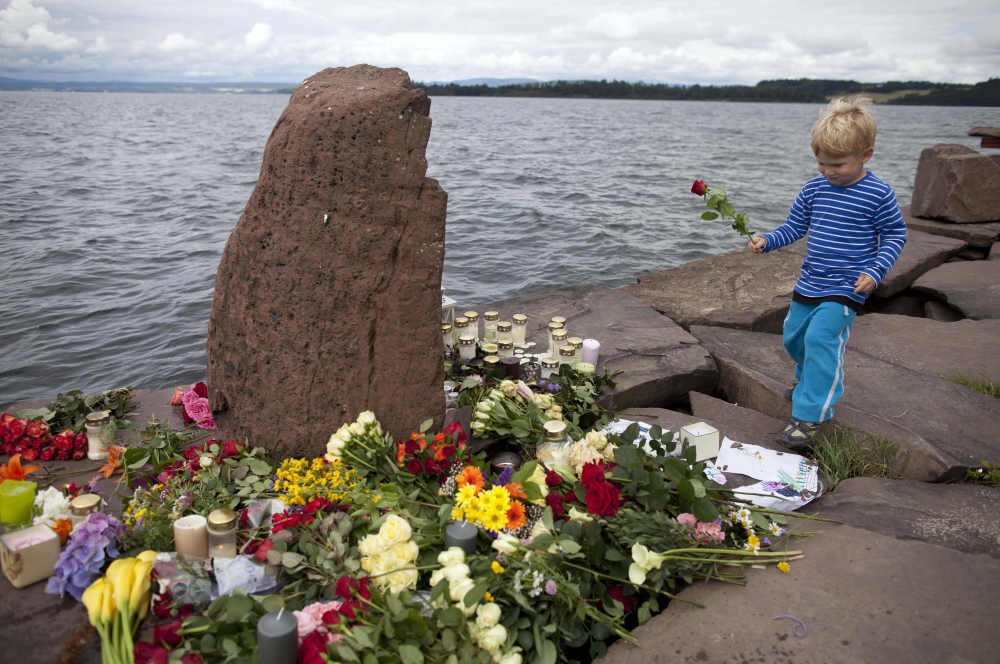 A child walks to place a rose amongst tributes in memory of those killed in the shooting massacre on Utoya island.

The story in Norway, where 76 people were killed Friday in a bombing and shooting rampage, continues to develop. Today the man arrested at Utøya made his first appearance and the country, struggling to come to terms with what happened, held a moment of silence. We'll update this post with latest developments, so hit refresh every once in a while.

The Guardian reports that thousands of Norwegians have taken to the streets to pay their respects. Prime Minister Jens Stoltenberg took the occasion to deliver this speech:

"To the young I would say this: The massacre on Utøya was also an attack on the dreams that young people had of contributing to a better world.

"Their dreams were brutally shattered. Your dreams can be reality. You can carry the spirit of this evening out into the world.

"You can make a difference. Do it! My challenge is simple: Get involved! Care! Become members of a political organisation! Take part in debates! Use your votes! Free elections are the jewel in the crown of democracy.

"By taking part you proclaim loudly your support for democracy."

Police now say 8 people died because of the explosion in Oslo and 68 people died on the island of Utøya, bringing the death toll to 76. Police corrected the previous estimate of 93, reports Reuters, "citing difficulties in gathering information at Utøya island."

Anders Behring Breivik, the man arrested in connection to a bombing in Oslo and a shooting massacre at a nearby island of Utøya, made his first court appearance today. 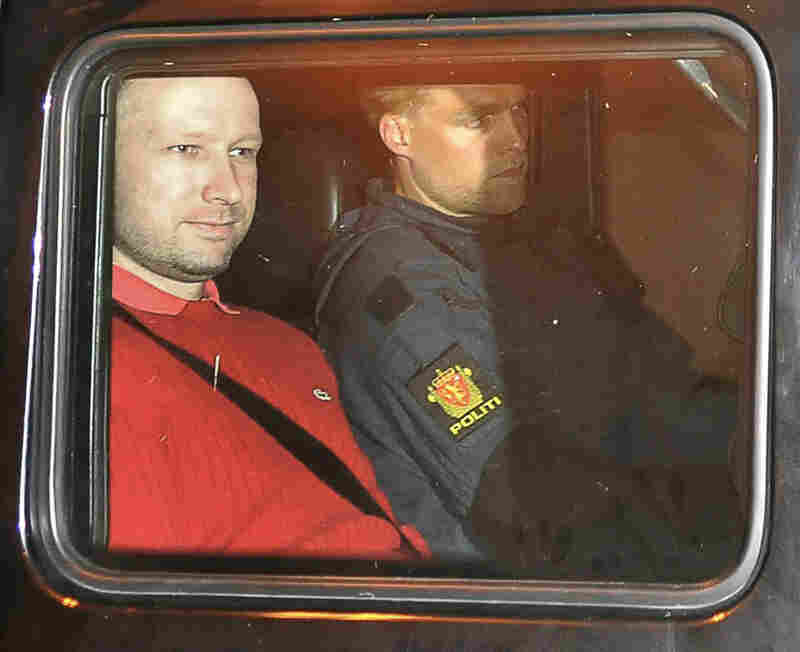 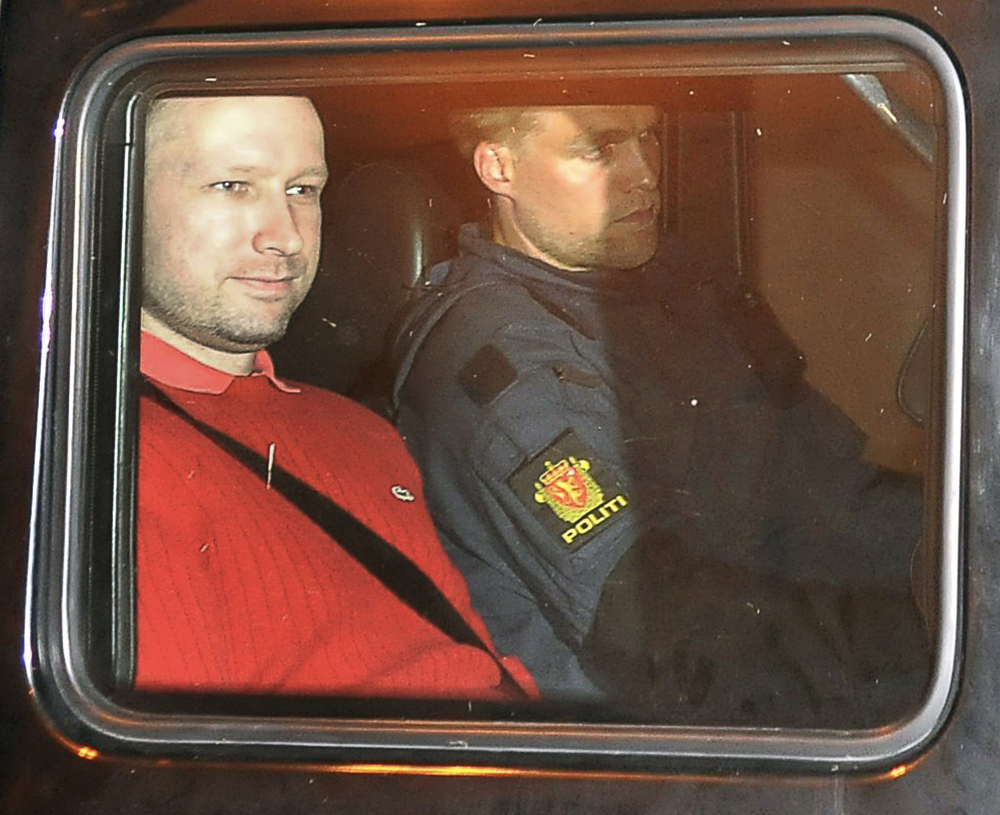 Bomb and terror suspect Anders Behring Breivik leaves the courthouse in a police car in Oslo on July 25.

The AP reports that the judge took the unusual step of holding the arraignment behind close doors without the public or reporters present. But after the arraignment, Judge Kim Heger issued a televised statement saying Breivik had acknowledged carrying out the bombing in Oslo and the shootings on the island of Utøya, in which at least 93 people were killed, but pleaded not guilty. Breivik said his organization had "two more cells," a statement Norweigan authorities are investigating.

Here's The Telegraph with more of what Heger said the 32-year-old Beivik said at the hearing:

In a televised statement, Judge Heger said: "He has not pleaded guilty. The accused believes that he needed to carry out this act in order to save Norway and western Europe from cultural Marxism and Muslim take over.

"The object of the actions was to give a sharp signal to people. The Labour Party has failed the country and the people and price of their treason is what they had to pay yesterday.

"The operation was not to kill as many innocent people as but to give a signal that could not be misunderstood. As long as the Labour party keeps driving its ideological line and mass importing of Muslims then it must assume responsibility for this treason."

He said the killings at the Labour Party youth camp was designed to stop recruitment to the centre-left party.

"Any person with a conscience can't allow their country to be colonised by Muslims," he added.

Monday's arraignment comes as the nation tries to come to terms with what happened. Yesterday, Prime Minister Jens Stoltenberg as well King Harald V and his wife, Queen Sonja gathered at Oslo Cathedral for a national service called "Mass of Mourning and Hope."

The Guardian posted this video of the service:

Also, today, Norway observed a moment of silence at noon. Here's some raw AP video of that: