Accessibility links
FBI: 'A New Suspect' In D.B. Cooper Skyjacking Case : The Two-Way The man known as D.B. Cooper became part of American folklore after parachuting from a plane he hijacked with $200,000 ransom. Cooper's stunt sparked wild speculation about his possible survival or death, and his identity. Now, the FBI says it has a new lead. 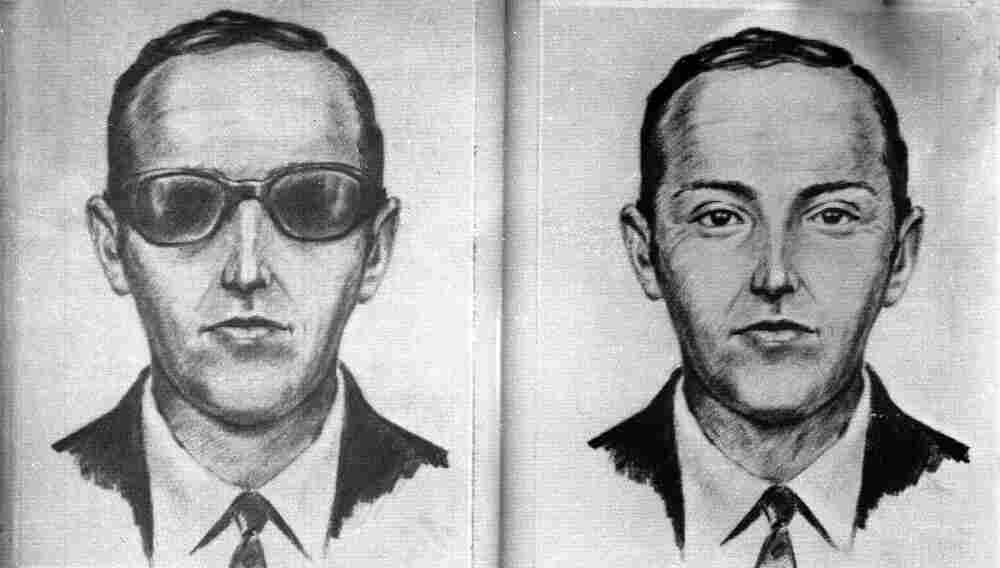 A 1971 artist's sketch released by the FBI shows the skyjacker known as 'Dan Cooper' and 'D.B. Cooper'. The sketch was made from the recollections of passengers and crew of a Northwest Orient Airlines jet he hijacked between Portland and Seattle. Anonymous/AP hide caption 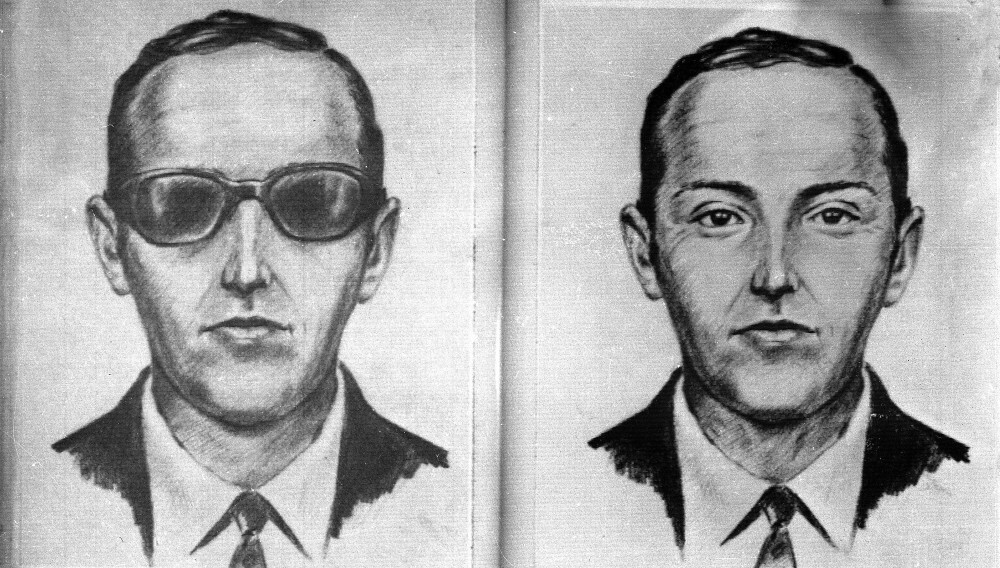 A 1971 artist's sketch released by the FBI shows the skyjacker known as 'Dan Cooper' and 'D.B. Cooper'. The sketch was made from the recollections of passengers and crew of a Northwest Orient Airlines jet he hijacked between Portland and Seattle.

Forty years after parachuting into folklore, the mysterious skyjacker identified as D.B. Cooper may soon be identified.

"We do actually have a new suspect we're looking at," says FBI spokeswoman Ayn Sandolo Dietrich in a story in the British newspaper, The Telegraph. "And it comes from a credible lead who came to our attention recently via a law enforcement colleague."

Cooper became an iconic American folk figure just before Thanksgiving in 1971, when he hijacked a Northwest Airlines flight from Portland to Seattle, demanded and received a $200,000 ransom, and jumped out of the plane with his loot near Ariel, Washington.

Some of the money was found in 1980 along the Columbia River near Portland, Oregon, but there's been no trace of Cooper since. A folk hero to some and common criminal to others, Cooper's stunt sparked wild speculation about his possible survival or death, and his identity. Several books have named people who seemed to fit Cooper's profile and several people claimed to be the legendary skyjacker. But the FBI has said the available evidence did not identify any of them as credible suspects.

The FBI has also said the investigation remains active. The new evidence comes four months before the 40th anniversary of the skyjacking, which helped prompt tighter airport security across the country.

Cooper claimed he had a bomb and held the crew and about three dozen passengers hostage. When the plane landed in Seattle, the FBI provided the $200,000 ransom and parachutes. Cooper sent the passengers off the plane.

The plane took off again and was headed for Mexico when Cooper lowered a rear stairway and jumped.

The hijacker left behind DNA and fingerprints on a magazine he handled during the hijacking, on a cigarette and on portions of the plane. Dietrich is not specific about the new piece of evidence but she told The Telegraph, "We're hoping there are fingerprints they can take off of it. It would be a significant lead," she continued, "And this is looking like our most promising one to date."

Telegraph reporter Alex Hannaford tried to get Dietrich to say whether the new suspect is still alive.

"Generally, the large majority of subjects we look into now are already deceased based on the timing of this," she responded.

Dietrich later cautioned the Seattle Times that the case "is not on the brink of a solution." But she again said, "We do have a promising lead" and "it is the most promising lead we have right now."

Dietrich did not immediately return NPR's request for additional comment.

The FBI has a 2007 summary of the case and it has also posted its files on the case.

Writer Geoffrey Gray is skeptical. Gray is about to publish the latest in a long string of D.B. Cooper books.

"The evidence the FBI uncovered on the plane, from my sources at least, has proven inconclusive for conclusive testing," Gray writes on his website for his book, Skyjack: The Hunt for D.B. Cooper (read an excerpt). "During the three years that I reported on the Cooper case and was given exclusive access to FBI files... I learned through then case agent Larry Carr that the fingerprints uncovered on the plane that night were virtually useless."

Gray says that the real question posed by the FBI's "reveal," as he calls it, "is not whether the Bureau has a new suspect — thousands of names have come in before for testing, and names from law enforcement sources too. The real question is the condition of the physical evidence."

In an interview with NPR, Gray adds that the FBI's teasing statements add to "an irresistible maze. It is an irresistible chase. It's become an obsession for many — including me."

FBI spokeswoman Ayn Sandolo Dietrich is now out of the office for two weeks but Special Agent Fred Gutt provided us with a few more details. The new suspect is dead, so no-one will be brought to justice, as he put it, if the new lead pans out.

The new evidence, he said, is fingerprints. Gutt acknowledges imperfections in fingerprints left on a magazine handled by the hijacker. Agents at an FBI lab will still seek a match but Gutt says the case is not a priority matter.

"It'll happen but when I don't know.," he said. "You know it'll certainly be below a current missing child case, a current terrorism investigation and many other things."

We've rounded up new details from the FBI in a new post.