Accessibility links
House Approves Bill To Raise Federal Debt Ceiling : The Two-Way The House of Representatives has approved legislation to raise the federal debt ceiling and prevent a U.S. default, as the nation nears the end of a bitter standoff. The Senate votes on the measure Tuesday. 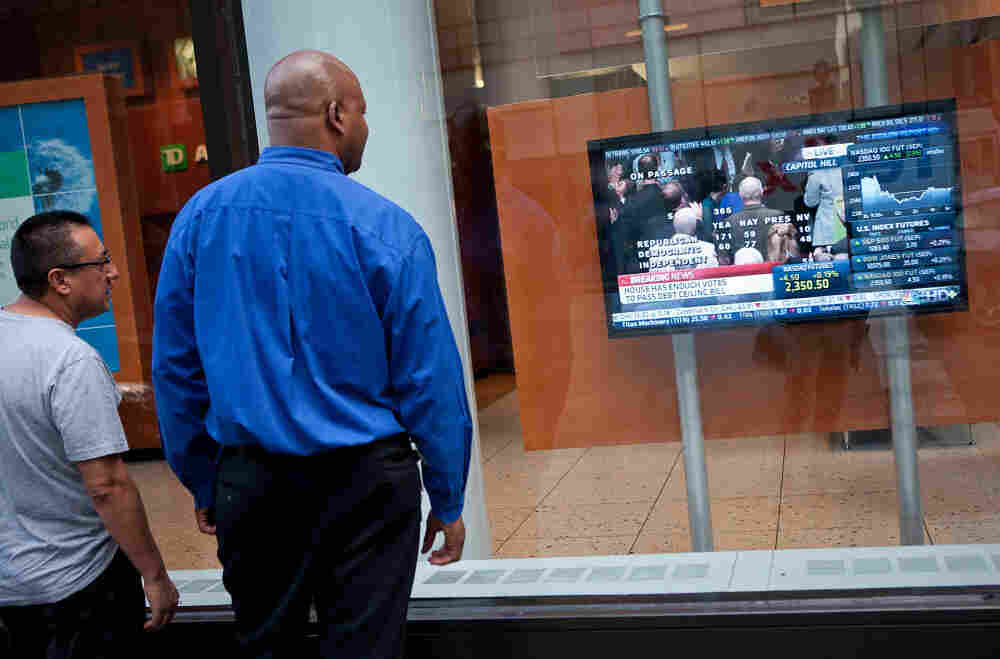 The House vote on raising the debt ceiling drew the interest of passers-by in New York. The bill will now head to the Senate, which is expected to vote on it Tuesday. Andrew Burton/Getty Images hide caption 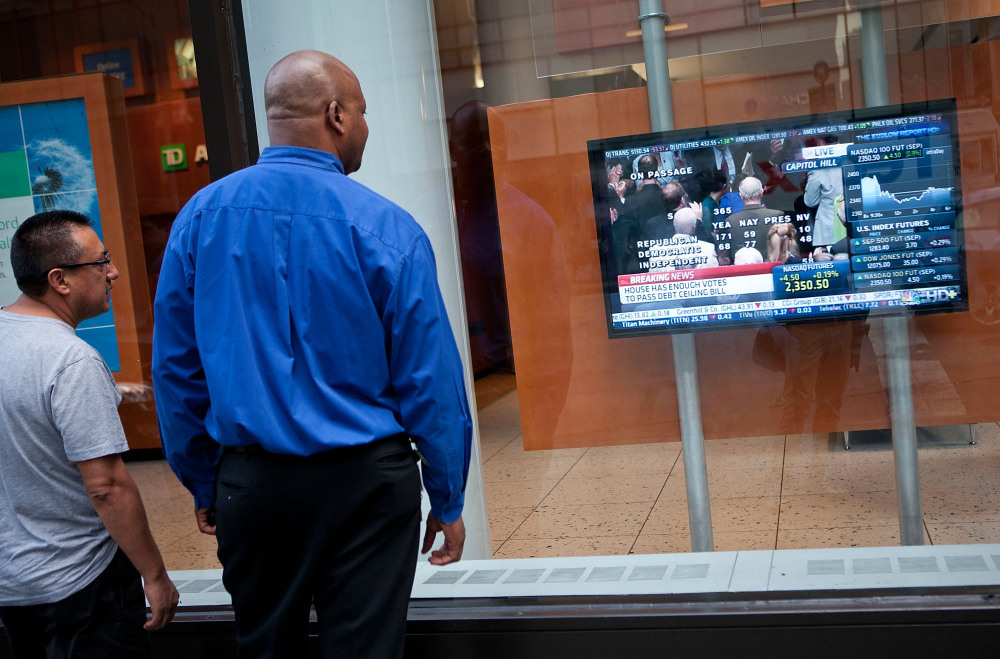 The House vote on raising the debt ceiling drew the interest of passers-by in New York. The bill will now head to the Senate, which is expected to vote on it Tuesday.

The House of Representatives has approved legislation to raise the federal debt ceiling and prevent a possible U.S. default, as the nation moves toward ending a bitter standoff.

The bill passed by a vote of 269 to 161; it required only a simple majority to pass.

A loud round of applause broke out on the House floor as the votes came in — apparently prompted by the sudden appearance of Rep. Gabrielle Giffords, who voted in favor of the bill.

The House last week approved Speaker John Boehner's plan to raise the U.S. government's debt ceiling by a vote of 218 to 210. The Senate rejected that plan. The White House and congressional leaders agreed on a new plan late Sunday.

The bill now moves to the Senate, which isn't likely to vote on the measure until Tuesday, according to reports. Senate party leaders who negotiated the deal with the White House seem to have the votes to approve it, but there are also procedural hurdles that must be taken into account.

Here are the essential details of the plan:

Moments before the final vote on the bill, House Democratic Leader Nancy Pelosi urged her colleagues to support it, despite admitting that she didn't like the bill's lack of revenue increases.

And Boehner urged his fellow Republicans to vote for the deal as well, saying earlier Monday that the legislation is a way to "solve this debt crisis and help get the American people back to work."

As Eyder wrote in a post earlier today, the Congressional Budget Office has released its "score" of the deal. In summary, the CBO said that the legislation's budget restraints would cut budget deficits by $917 billion between 2012 and 2021. And its spending cuts would reduce the deficit by $1.2 trillion.

Nate Silver of the FiveThirtyEight blog has his own analysis of the bill. Silver says it's correct to see the outcome of spending cuts and no tax hikes as a "win" for Republicans. Then he goes a little deeper:

But given that Democrats were willing to accede to the constraints demanded by Republicans, they were able to exert a lot of control over the substance of the cuts. In particular, the first round of cuts will include $350 billion in defense savings, while the second round would include between $500 and $600 billion in defense cuts if no bipartisan agreement is reached.

We'll have more updates as things evolve. And on Tuesday's Morning Edition, you can hear coverage and analysis of the federal debt ceiling debate — and its resolution. In the meantime, you may want to distract yourself by hearing Carl '60 Cent' Kassell rap about the debt crisis. Here's a sample:

Weren't feeling it at all

If we couldn't get a deal

Our rating would fall.