Accessibility links
After 57 Years, Man Looks To Sell Rare Lou Gehrig Memorabilia : The Two-Way Jeffrey Quick doesn't have family ties to legendary Yankee Lou Gehrig. But his mother dated the ballplayer, and became a close friend to his mother. Now Quick is left with treasures from Gehrig's life — a glove, a uniform and a grade-school autograph book among them. 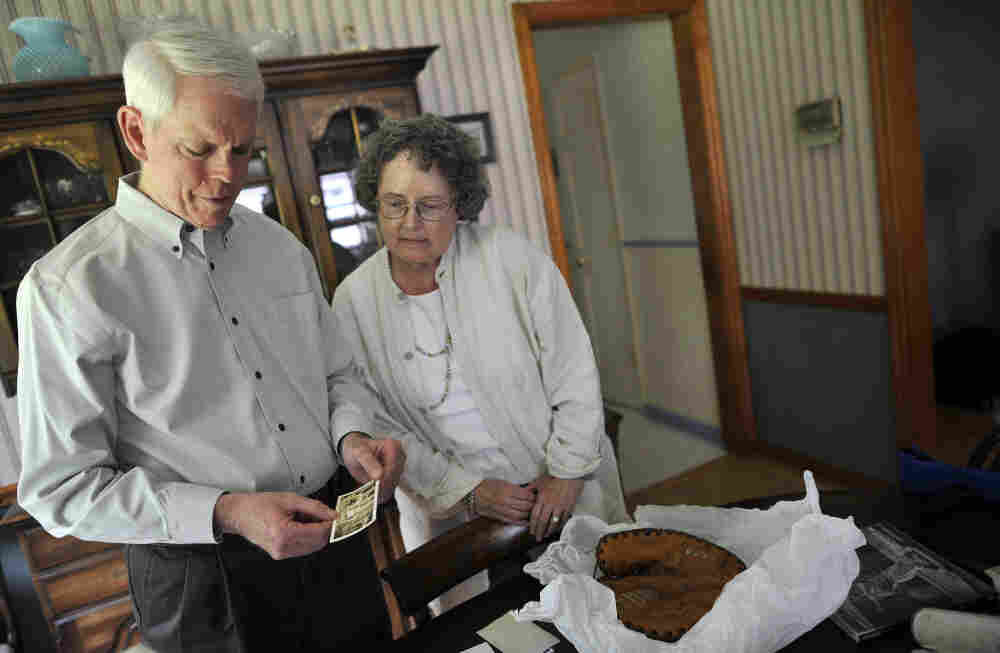 Jeffrey Quick, 69, holds a family photo of his parents and Lou Gehrig's mother as he and his wife, Joan, stand in their dining room. On the table next to them is a glove signed by Gehrig's Yankees teammates — a gift from Christina Gehrig. Matt Rainey/Matt Rainey for NPR hide caption 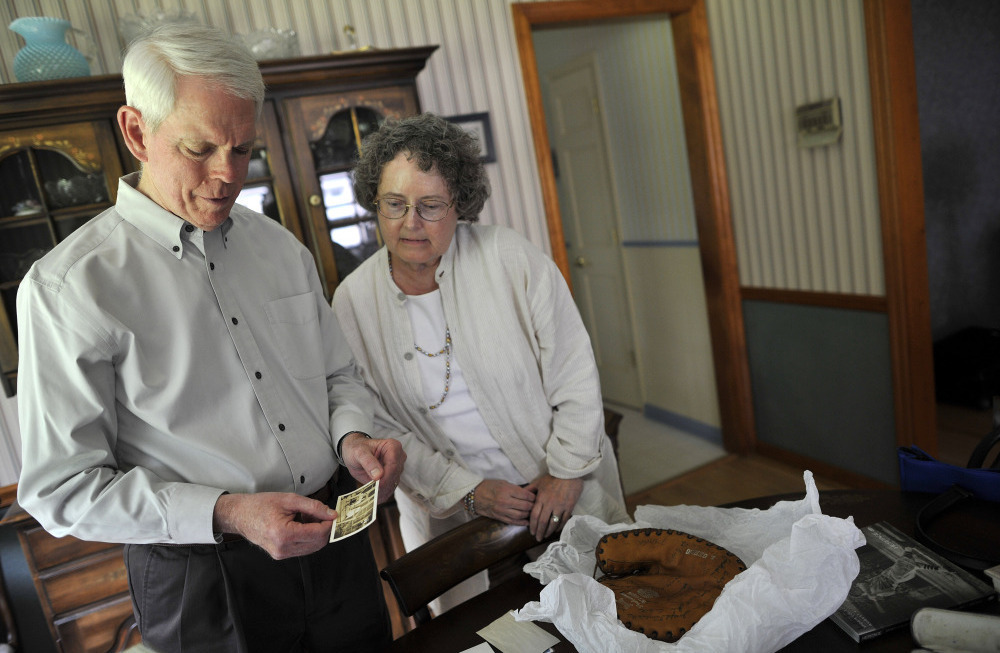 Jeffrey Quick, 69, holds a family photo of his parents and Lou Gehrig's mother as he and his wife, Joan, stand in their dining room. On the table next to them is a glove signed by Gehrig's Yankees teammates — a gift from Christina Gehrig.

Jeffrey Quick doesn't have any family ties to legendary Yankees ballplayer Lou Gehrig. But his collection of mementos from Gehrig's life — a glove and a grade-school autograph book among them — are the kinds of things passed down from one generation to the next. And that's how Quick got them. Gehrig's mother, Christina, left them to Quick's mother, back in 1954.

As Quick tells All Things Considered co-host Michele Norris, his mother, Ruth Quick, briefly dated Lou Gehrig, back when he was a single superstar in New York.

"From what I understand, she did date him some," Quick says. The relationship didn't last, but Ruth Quick made an impression on Lou's mother.

"Regardless of what happened with my mom and Lou, there was a lasting, and I'll say even perhaps a loving relationship between my Mom and Christina," Quick says.

Jeffrey Quick, 69, was born after Gehrig's death of ALS. And to celebrate his birth, Christina Gehrig brought the Quick family a glove — one that had been autographed by many of her son's teammates.

As Quick's family photos show, he and his parents spent lots of time with Gehrig's parents. And in the end, Christina Gehrig — or "Mom," as Quick says everyone called her — gave Quick's mother a pile of Lou Gehrig sports artifacts that has collectors in a tizzy. Included are at least one old uniform with the iconic number 4 on the jersey, and a baseball signed by the 1926 Yankees.

Now Quick is auctioning off much of his rare Lou Gehrig memorabilia, as The New York Times reported today. But the glove given to his parents by "Mom" Gehrig after his birth is not included.

The Times also relayed a possible explanation for Lou Gehrig's mother splitting her estate between Ruth Quick and another woman — and leaving nothing for Gehrig's wife. "Christina Gehrig's daughter-in-law was still alive," writes Peter Applebome, "but they feuded for years, most bitterly over Lou Gehrig's will, so it was not surprising that with her only son dead and no grandchildren, she gave her estate to someone else."