Accessibility links
Tuskegee Airmen Gather To Mark 70th Anniversary : The Two-Way America's first black military pilots are in Washington, D.C., to celebrate their 70th anniversary. And one of the planes used to train some of the 1,000 Tuskegee Airmen has been found. 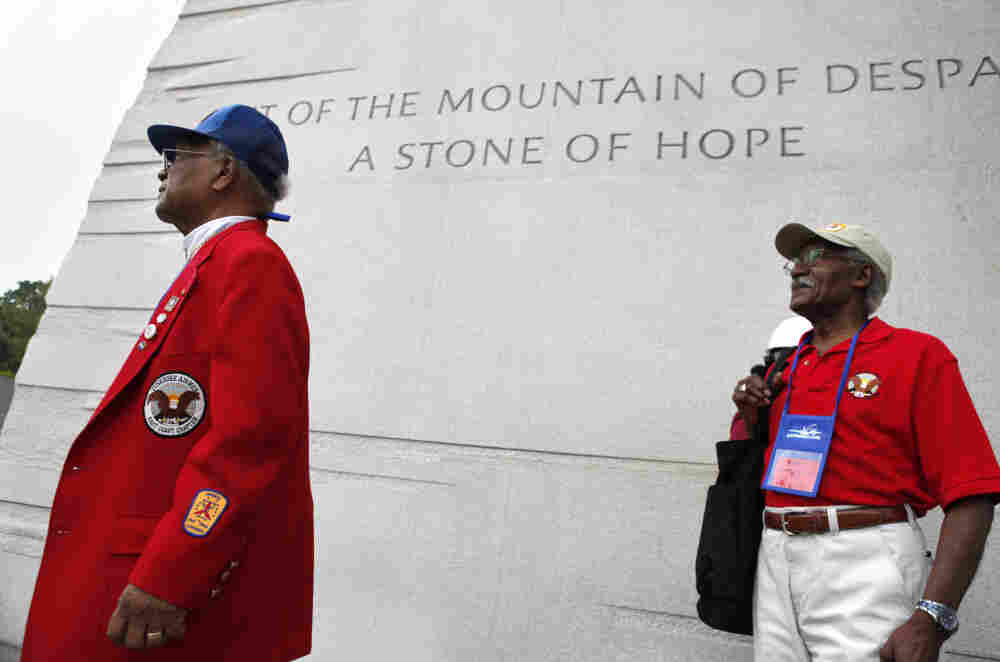 Tuskegee Airmen William Fauntroy, left, and William Wilson, got an early look at the Martin Luther King, Jr. Memorial Wednesday. The veterans are in Washington for the Tuskegee national convention; the memorial will open in late August. Jacquelyn Martin/AP hide caption 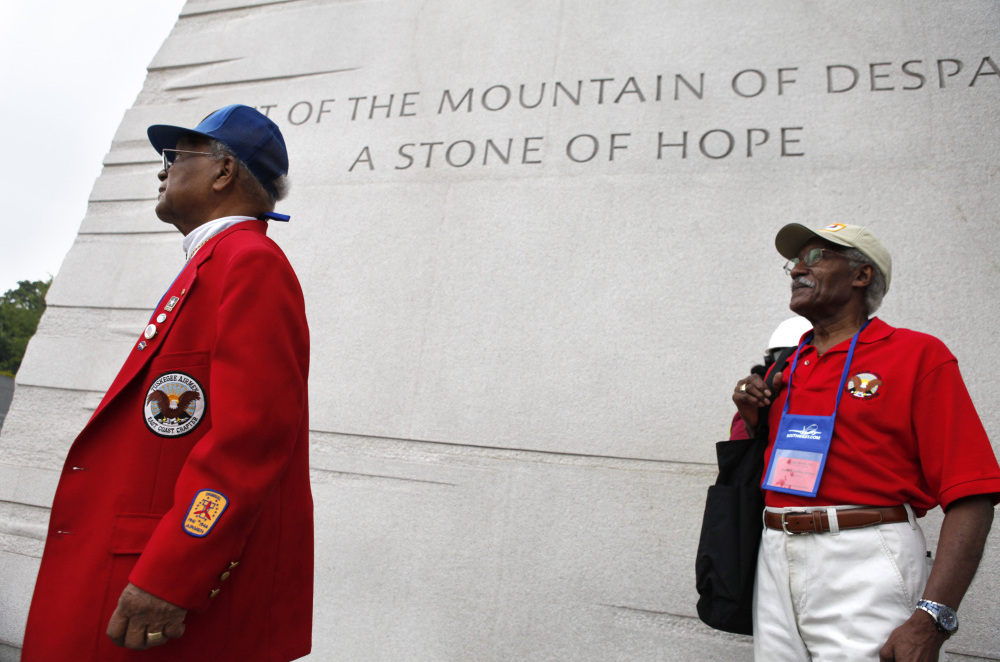 Tuskegee Airmen William Fauntroy, left, and William Wilson, got an early look at the Martin Luther King, Jr. Memorial Wednesday. The veterans are in Washington for the Tuskegee national convention; the memorial will open in late August.

America's first black military pilots are celebrating their 70th anniversary, as nearly 100 veterans of the Tuskegee Air Corps have reunited in Washington, D.C., for their national convention this week.

Pilots in the famed 332nd Fighter Group and other Tuskegee units received their flight training at the Tuskegee Army Air Field in Tuskegee, Ala. Their first official training sessions took place on on July 19, 1941.

And now, one of the planes used to train more than 1,000 Tuskegee aviators has been found, after being used as a crop duster and sold on Ebay. This week, it will be donated to the Smithsonian's National Museum of African American History and Culture.

As WAMU's Armando Trull reports, Air Force Capt. Matthew Quy bought the 1944 Stearman biplane six years ago. Only later did he learn that it had played a role in history:

"My wife and I sat down and talked about it and we decided to dedicate the airplane in their honor and we thought, well, what should we name the airplane, and Spirit of Tuskegee came up," said Quy.

The restored plane brought back memories for Col. Leo Gray, a Tuskegee airman.

"It was a wonderful experience especially the first time you went up by yourself, my instructor said, 'Let me out of this thing, go kill yourself,'" said Gray.

Quy, who has maintained a blog about his plane and its history, took the plane out for its final flight Wednesday, flying down the Potomac River and over the surviving Tuskegee veterans, gathered at the riverfront Gaylord Resort.

Some of the surviving Tuskegee pilots held another, more informal, reunion earlier this year in Florida. NPR's Karen Grigsby Bates reported on that gathering.

And earlier, on the Picture Show blog, Mito Habe-Evans wrote about the day back in 1941 when first lady Eleanor Roosevelt went for a plane ride with Tuskegee Institute flight instructor C. Alfred "Chief" Anderson.

A new film about the airmen, named Red Tails after the nickname given to the Tuskegee fighters' paint job, is coming out in January 2012. The online trailer for it just came out; you can watch it at The Root's website.