Accessibility links
Swedish Man Arrested For Trying To Build Nuclear Reactor In His Kitchen : The Two-Way Police arrested the man after he called the Swedish Radiation Authority to ask whether splitting atoms at home was legal. After his arrest and after police took his radioactive material, he said he would keep his projects "theoretical."

We're a bit late to this story, but it's too good not to pass along: A Swedish man was arrested late last month, after he tried to build a nuclear reactor in his kitchen.

Richard Handl said he had the radioactive elements radium, americium and uranium in his flat in southern Sweden when the police showed up.

He said on Wednesday he had always been interested in physics and chemistry and "just wanted to see if it was possible to split atoms at home".

Handl never tried to hide what he was doing. In fact, according to The Local, an English-language news site from Sweden, police went to his apartment after he contacted the Swedish Radiation Authority to ask if it was legal to build a nuclear reactor. 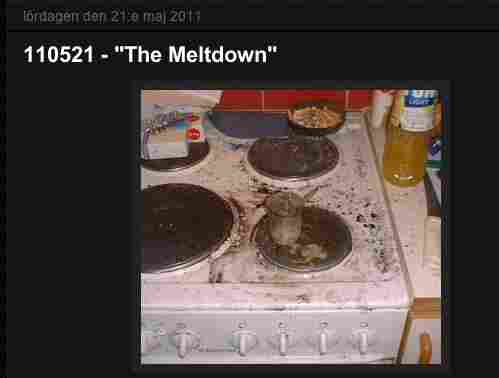 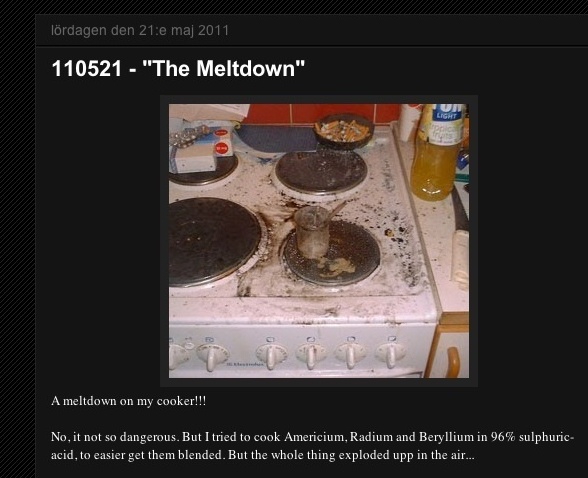 Handl even kept a blog about his adventures. He wrote about how he got radioactive Americium from a smoke detector and he posted a picture of a vial filled with glowing tritium.

In another post, he featured a picture of the remains of what he called "a meltdown" in his kitchen.

No, it not so dangerous. But I tried to cook Americium, Radium and Beryllium in 96% sulphuric-acid, to easier get them blended. But the whole thing exploded upp in the air...

In a post dated July 22, he writes that because of his arrest, his project had been cancelled.

Handl gave an interview to the Swedish Helsingborgs Dagblad (HD) newspaper. He was released from jail and told the paper he spent a little over $1,000 to build the reactor but he "got it going.

"I had just bought what was needed, so I do not know if it had worked," he told HD, according to a Google translation of the piece. "It's probably pretty hard to get it to work. But they took all my stuff, so now I'm done. Now I'll keep it at the theoretical level," he said.