Accessibility links
DuPont Pulls Herbicide Blamed For Tree Deaths : The Two-Way DuPont Co. plans to pull a new herbicide from the market, after it was blamed for damaging or killing thousands of trees. Since the EPA approved the weedkiller Imprelis for sale last October, it has become the target of several lawsuits. 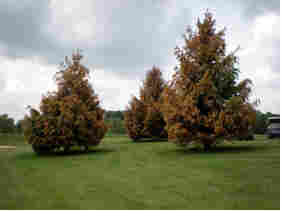 Damage done to these Norway spruce trees has been blamed on contact with Imprelis. DuPont is pulling the herbicide. Penn State Extension hide caption

DuPont Co. is pulling a new herbicide from the market, after it was blamed for damaging or killing thousands of trees. Since the EPA approved the weedkiller Imprelis for sale last October, it has become the target of several lawsuits.

As reported by the Lawn and Landscape website, DuPont has posted a letter announcing the suspension of sales, and instituting a return-for-refund policy. The company also expressed regret for any "tree injuries."

A New York Times story from July sums up the complaints:

A recently approved herbicide called Imprelis, widely used by landscapers because it was thought to be environmentally friendly, has emerged as the leading suspect in the deaths of thousands of Norway spruces, eastern white pines and other trees on lawns and golf courses across the country.

Home gardeners can relax: Imprelis was apparently never sold to anyone but lawn-care professionals. But you may want to note its active ingredient: Aptexor. On its website, DuPont calls Aptexor "the first compound in an advanced generation of carboxylic acid herbicides."

DuPont officials seem to believe that its herbicide was being applied incorrectly, either too close to trees' roots, or in an area where runoff would bring the chemicals in contact with the trees.

A number of botanists and other natural scientists have been tracking problems that may have stemmed from Imprelis. And golf course superintendents have been following the discussion closely, as well.

On one site based in Iowa called IATurf, Nick Christians warned to be very careful when using Imprelis, back in June. But a commenter on the story, identifying himself as Steve from Iowa, seemed to be saying it was too late:

I live in Cedar Rapids, IA, and have both a 30' spruce and 10' pine that were affected. Neither looks like it will survive. I just recieved a letter from my landscaping company informing me of the problem with Imprelis and admitting they used it. Besides the conifers, I have several shrubs and garden plants (tomatoes and herbs) that were clearly affected as well. It just makes me sick.